This is what ripping holes in Obamacare looks like: The horrific human cost of the GOP's anti-reform crusade

Republicans in South Carolina fought Obamacare tooth and nail, and their constituents are paying the price 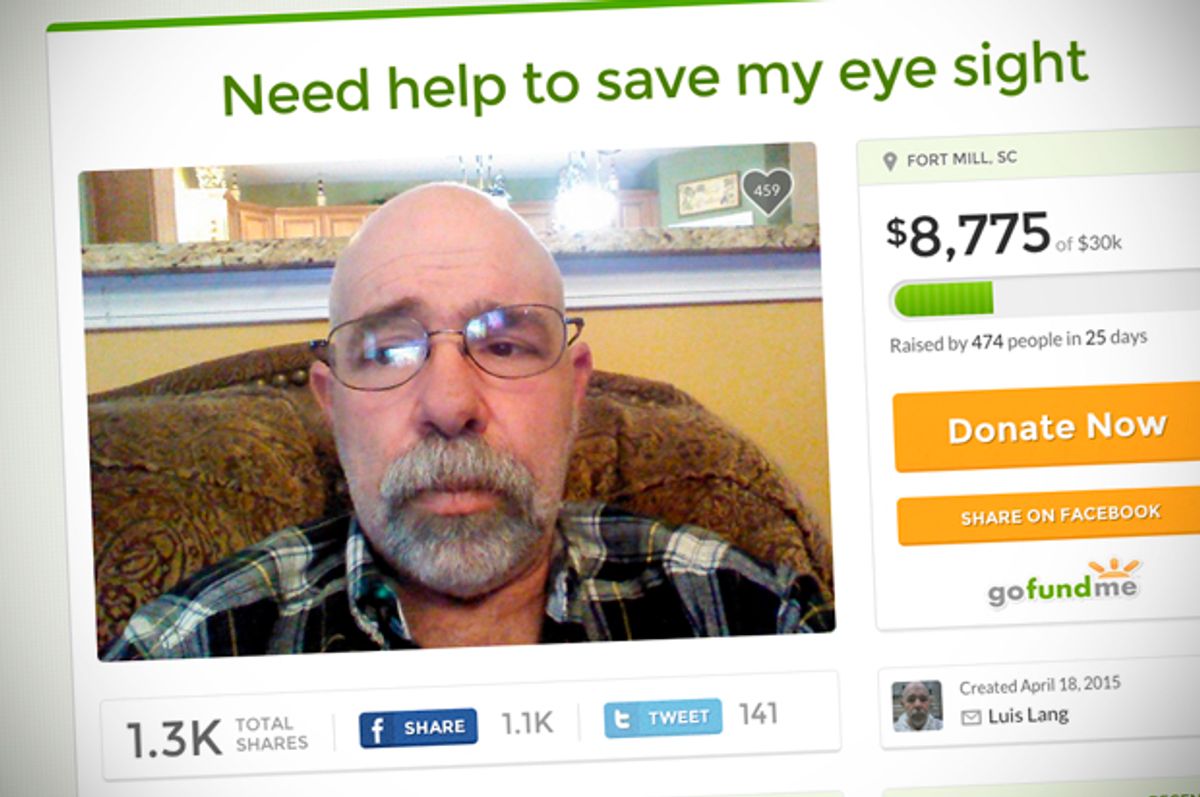 The ongoing and exhausting fight over the Affordable Care Act is too often framed in terms of the political debate and how it will impact the electoral future of one or both political parties. The human cost of continued Obamacare wrangling often gets overlooked, which is unfortunate, given how steep those costs can be.

Case in point: this Charlotte Observer profile of Luis Lang, a rock-ribbed conservative from South Carolina who refused to comply with the ACA’s insurance mandate and proudly paid for all his own medical care, until disaster struck:

But after 10 days of an unrelenting headache, Lang went to the emergency room on Feb. 25. He says he was told he’d suffered several ministrokes. He ran up $9,000 in bills and exhausted his savings. Meanwhile, his vision worsened, and he can’t work, he says.

That’s when he turned to the Affordable Care Act exchange. Lang learned two things: First, 2015 enrollment had closed earlier that month. And second, because his income has dried up, he earns too little to get a federal subsidy to buy a private policy.

Lang, a Republican, says he knew the act required him to get coverage, but he chose not to do so. But he thought help would be available in an emergency. He and his wife blame President Barack Obama and congressional Democrats for passing a complex and flawed bill.

“(My husband) should be at the front of the line, because he doesn’t work and because he has medical issues,” Mary Lang said last week. “We call it the Not Fair Health Care Act.”

We’ve been hearing stories similar to Mr. Lang’s for a long time now – low-income people in red states who are in acute need of medical care but refused to be a party to the Affordable Care Act owing to their conservative politics. They made a decision: the ideological satisfaction of resisting “big government” outweighed the practical benefit of access to medical care. And partly as a consequence of that decision, they’ve suddenly found themselves in the situation that the Affordable Care Act was designed to prevent: they’re sick, uninsured, and unable to obtain coverage.

It’s easy and tempting to turn Lang into a villain or a whipping boy, but there’s little utility in that. His situation is better understood as a testament to the value of the ACA and an indictment of the political movement that would all but guarantee more heartbreaking scenarios like this one.

Luis Lang’s situation is not a failure of the Affordable Care Act – it’s a failure of conservative politics. Obamacare, as originally crafted, would have provided Mr. Lang the last-ditch access to medical coverage he so desperately needs in the form of expanded Medicaid. But, as a consequence of conservative legal challenges to the law, the Supreme Court made Medicaid expansion optional, thus providing Republicans in state governments – like South Carolina Gov. Nikki Haley – a means to rip holes in the safety net Obamacare endeavored to create.

Mr. Lang can blame Obama and the Affordable Care Act all he likes, but he’d be in the same situation if the ACA had never passed, only he’d also be fighting against insurance company discrimination based on his pre-existing condition. The reason he can’t get care now is because the Republicans who control his state have blocked his access to Obamacare’s benefits. They decided that South Carolina didn’t need or want funding from the federal government to expand coverage to low-income residents, and the consequence of that decision is that people who would otherwise qualify for coverage are left wanting.

And it could get much worse. If the conservatives on the Supreme Court align themselves with the tortured legal reasoning at the heart of the King v. Burwell challenge to Obamacare’s insurance subsidies, people in states like South Carolina who aren’t currently going through the same stressful disaster as Luis Lang will suddenly find themselves once again unable to afford insurance. Their only hope will lie with the anti-Obamacare Republicans in Congress who’ve spent half a decade failing to get their act together on healthcare policy.

And that gets to the grim irony at the center of Obamacare opposition. The Republican state governments that have so forcefully opposed its implementation have foisted upon their constituents the worst of all scenarios – they’re subsidizing Obamacare without actually receiving any of the benefits. That’s the price of conservative Obamacare opposition, and, unfortunately, it’s people like Luis Lang who are literally left holding the bill.