The maker of the "Citizen Kane of cheap, post-apocalyptic biker movies" returns with a roaring fourth installment 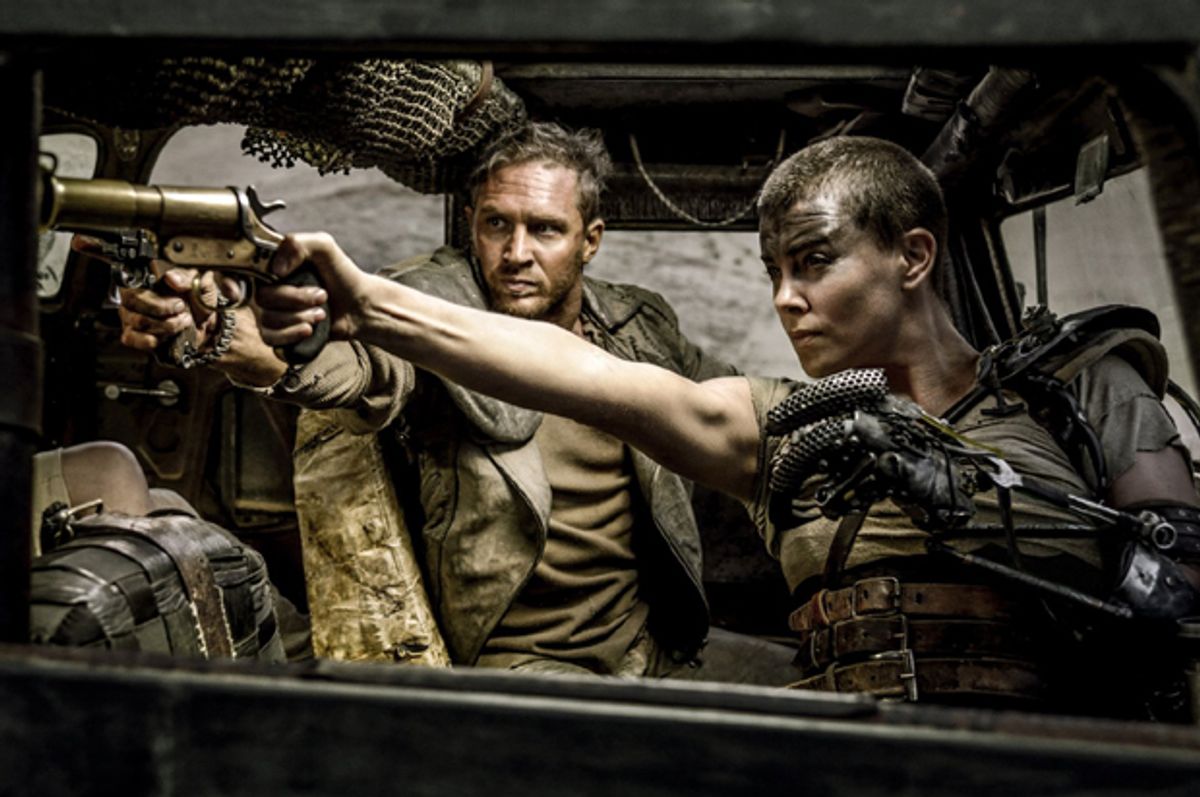 It all began with a shot of a vulture perched on a highway sign that read “Anarchy Road,”  apparently the main highway by which Australia’s rapidly diminishing oil supply is transported.  All we’re told is that what we’re about to see happens “A few years from now.”

American audiences must have been puzzled as to what country George Miller’s first feature film, "Mad Max," was taking place in.  In the kind of nonsensical move common to Hollywood studios, when the film was released in the U.S. in 1979, American voices were dubbed over those of Aussie actors with the intent that viewers would think it set in the Western U.S. Not until 1995, when "Mad Max" and "Mad Max II" (or "The Road Warrior," as American filmgoers knew it) were  shown at the Museum of Modern Art did we get to hear Mel Gibson’s real voice in the role that made him an international star as Max Rockatanski (his last name is spoken just once in three films — at the beginning of "Mad Max" over a police radio.)

For the first few years after the release of "Mad Max" the overwhelming number of statesiders never had a chance to see it at all. From 1979 to 1984, in New York, “the Citizen Kane of cheap, post-apocalyptic biker movies,” as the East Village Eye’s Sebastian Dangerfield called it,  could only be seen at one theater, a tawdry little 24-hour movie house on 42nd Street.

Lacking even the minimal technical resources of the low-budget American International Pictures motorcycle flicks that had inspired him, George Miller, the director, a medical school graduate who got into films by way of a university competition, couldn’t afford to film a single extended chase sequence.  “Every chase in 'Mad Max' is an illusion,” said Miller by phone from Australia before kicking off the publicity tour for the fourth Mad Max film and the first in 30 years, "Fury Road."

“The actions are illusions created by editing. I’m not sure where more of the movie was created — on the highway or in the editing room.”

"Mad Max" is so spare that  it never even takes time to explain its own premise.  It wasn’t until the prologue to "The Road Warrior" that audiences learned that the events of the previous film occurred as World War III, caused by oil shortages, is about to break out. Shot on a budget of about $490,000 just a few miles outside Melbourne, Miller recalls that there wasn’t even time for rehearsals.

“When I look at the film now,” he says, “I realize that this scene or that scene had made it into the final cut after just one take. “I think in retrospect that helped.  There was a rawness and immediacy to  much of the footage that might not have been there if we’d had a bigger budget. Mel used to kid me that if I had had twice as much money the movie would only have been half as good.”

He received encouragement from actors and filmmakers who appreciated his wildly innovative approach to action films.  One early fan was Kurt Russell, whom Miller met at an Australian film festival. “I asked him if he would come back to my studio and critique some of the rushes with me.  After about 45 minutes he shook his head and said, ‘Man, compared to what you’re doing, Hollywood action movies look like TV sitcoms. You  had me ducking in my seat and covering my head.’”

Riding the crest of the Australian New Wave that was peaking in the late 1970s with films by Peter Weir, Gillian Armstrong, Bruce Beresford and Fred Schepisi, "Mad Max" went on to shock the Australian film industry, earning more than $100 million around the world and becoming the biggest-drawing export to that time.  Though it received scant critical attention in the English-speaking world – even Australian film critics pretty much ignored it – "Mad Max" was, to Miller’s surprise, lauded by critics and other filmmakers in other parts of the world.

“Every week or so we’d get a review or newspaper story from somewhere in the world and see that a Japanese film historian thought that Max and his highway cops were like Samurai warriors, or that someone in Norway thought that they reminded him of a band of old Vikings.

“I didn’t know what to make of it. I had made what I regarded as a crash-and-burn movie, a classy one, but no  more than that, and then people in countries where I never even thought 'Mad Max' would play were responding to it as if it touched some primal nerve. It was thrilling but a little baffling.”

"The Road Warrior," the movie that would change the entire concept of action movies, started to come together in 1980 when Miller attended film study courses at UCLA while reading Jung and Joseph Campbell’s "Hero With a Thousand Faces" while watching movies every night.  What he was not doing was what some later reported: namely, experimenting with mind-altering substances. “I’m kind of a square in that respect,” says Miller with a laugh. I was amused and a little flattered  that people thought I had attained some kind of psychedelic quality as a filmmaker. But I didn’t need drugs.  My mind was being blown by what I was reading, seeing and studying.”

He had started out wanting nothing more from his action films than “to make people feel exhausted when they leave the theater, like they’d been on a really great roller coaster ride.”  But he began to feel that he had tapped a vein richer than even he understood. “I really began to feel that we had struck some mythological chord with 'Mad Max,' that those of us who had put the film together were the unwitting servants of a collective unconscious.  I don’t know how much of that I believe now, but it was pretty invigorating stuff in 1980.”

The film that resulted from the confluence of these influences  wasn’t quite like anything anyone had ever seen.  There were elements of so many different films reflected in "The Road Warrior" that film writers were tripping over themselves trying to point them out.

Most agreed that  it was a form of updated western; there’s a bit of the John Wayne “adult” western "Hondo," about a bitter loner with only a mongrel dog for a companion wandering through a lawless Arizona territory in the 1870s. The Feral Kid, Emile Minty, who talks only in grunts and carries a deadly metal boomerang, first sees Max approaching in a long shot reminiscent of when the boy played by Brandon DeWilde first sees Alan Ladd  in "Shane." And the final spectacular chase of Max’s oil tanker by the outlaw gang the Marauders through the wasteland  seemed like the chase in "Stagecoach" on PEDs.  Many were also quick to connect Miller’s wasteland with that of the 1975 cult classic by L.Q. Jones, "A Boy and His Dog."  (For the record, Miller says he did not see that film till nearly 20 years later.)

Despite the film’s original title, though, "The Road Warrior" is not a sequel but a rethinking of an entire genre.  It was filmed in the winter in the clear, natural light of the Outback – you’ll see none of the characters are really sweating.  “We use high-speed lenses that captured that eerie, pink-orange sky that you can only find in an Australian afternoon.”

"The Road Warrior" seems like a window into nightmare dreamed in broad daylight  Although the film looks like it was made on a wider scale than Mad Max, the budget was only marginally higher. In many ways it proceeds as if Hollywood action movies didn’t even exist.

One gamble that paid off was an ominous, Twilight-of-the-Gods  full orchestral score by Australian composer Brian May that would eventually become a bestseller on  record, then CD.  “Everyone said, ‘You’ve got to have a heavy metal score,’” says Miller. “I thought that 'Mad Max' was rock 'n’ roll enough. In 'Mad Max II' I wanted something with more resonance.”  (The New Yorker’s Pauline Kael wrote, “If there was such a thing as a Jungian film score, this would be it, unless Carl Orff staked an earlier claim.”)

Though "The Road Warrior" did not open to big box office, the look and sound of the film made a huge impression on pop culture in the 1980s. Texaco ran a series of “Road Worrier” commercials in which the Mad Max-like character worries that he won’t be able to make it to the next Texaco station, and Phil Collins played Max in a MTV video for one of his singles. Hollywood tried again and again to tap in to Miller’s vision, first in B-movie imitations such as "Warriors of the Wasteland" and then in huge bloated post-apocalyptic films like Kevin Costner’s flops, "Water World" and "The Postman." Vernon Wells, the stuntman who played  Wez, the most ferocious  of the Marauder gang, even reprised the role in a comedy, "Weird Science."

Aficionados even accused Miller of Hollywood-izing Max in his third installment, "Mad Max Beyond Thunderdome," by far the most successful of the three at the box office, which Miller co-directed with George Ogilvie. "Thunderdome" definitely had its strong points, particularly a nasty and witty performance by Tina Turner as the Master of Bartertown. But it erred in taking Max out of the Wasteland, whose starkness had given "The Road Warrior" so much of its power.

"Fury Road" will please fans of "The Road Warrior" – it’s much more like the second film than it is like "Mad Max" or "Thunderdome" – while taking Max’s story in new directions.  After all of that wandering around alone in the Outback, he could use a companion like Charlize Theron’s Furiosa, even if the blond head is shaved and she’s missing half of one arm. Tom Hardy is a sturdy and serviceable Max, nearly as laconic as Gibson (who had exactly 14 lines of dialogue in "The Road Warrior").

I wish Miller had not given in to the temptation to use guns; the lack of firearms in "The Road Warrior" necessitated more ingenious forms of weaponry such as crossbow gauntlets and metal boomerangs. But  even though Max has been away for 30 years, he seems to get younger as Miller, who just hit 70, gets older, and there’s the definite possibility for another couple of sequels down that Anarchy Road.

Is Miller up for such a possibility?  “Well,” he replies, “I don’t see myself adapting Oscar Wilde for the screen, so why not?  Who’d have thought back in the ‘70s that people would one day be nostalgic for the apocalypse?”