"This is fixable": Rachel Maddow condemns government for failing to enact safety measures that would have prevented derailment 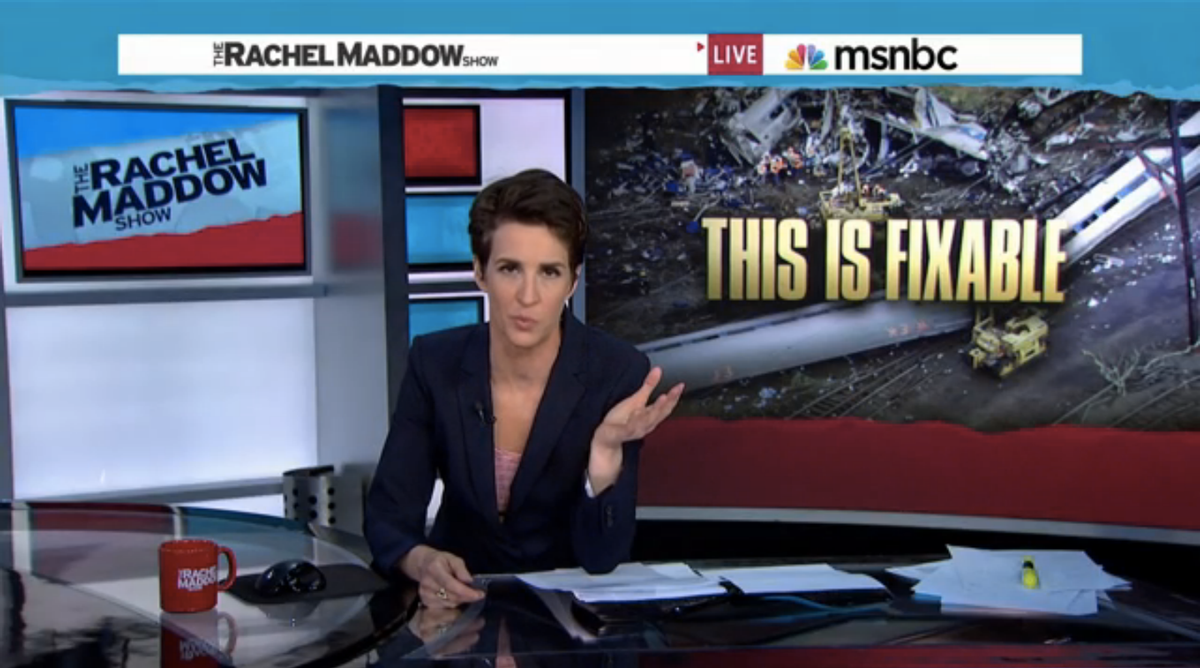 On Wednesday evening Fox News and MSNBC stayed true to form by featuring segments with starkly opposing viewpoints. On "The Kelly File," Megyn Kelly slammed politicians for exploiting the Amtrak derailment with talk of insufficient infrastructure funding. Meanwhile on "The Rachel Maddow Show," Rachel Maddow slammed the U.S. government for failing its citizens through negligent governance. Way to play your character games hard, Kelly and Maddow.

Maddow noted that after a major train crash in Los Angeles, the government passed the Rail Safety Improvement Act of 2008, which mandated that every railway implement a "positive train control system" by December 31, 2015.

In Kelly's segment, she argued that because the government was in the process of installing these systems, it was doing its duty and didn't deserve blame for Tuesday's Amtrak derailment. Maddow, on the other hand, thinks the government has everything to do with the derailment.

"We are really good at investigating these kinds of disasters when they happen," Maddow said. "We find out why they happened and we then find out what would have prevented them from happening. Positive train control, this little safety system that we know how to do, it would have prevented...this crash too and saved all those lives in Philadelphia, too. But the system's not in place yet."

Here's what I think: I think everybody will happily politicize a tragedy if it dovetails with something they care strongly about, and the opposing party will happily condemn them for politicizing said tragedy. In this case, there actually is a method of preventing train crashes and the government and transportation authority failed to enact it in time to prevent unnecessary deaths.