George Stephanopoulos bows out: Why GOP candidates might miss him as a debate moderator

The ABC News anchor has recused himself from moderating GOP debates. Who are the candidates going to yell at, then? 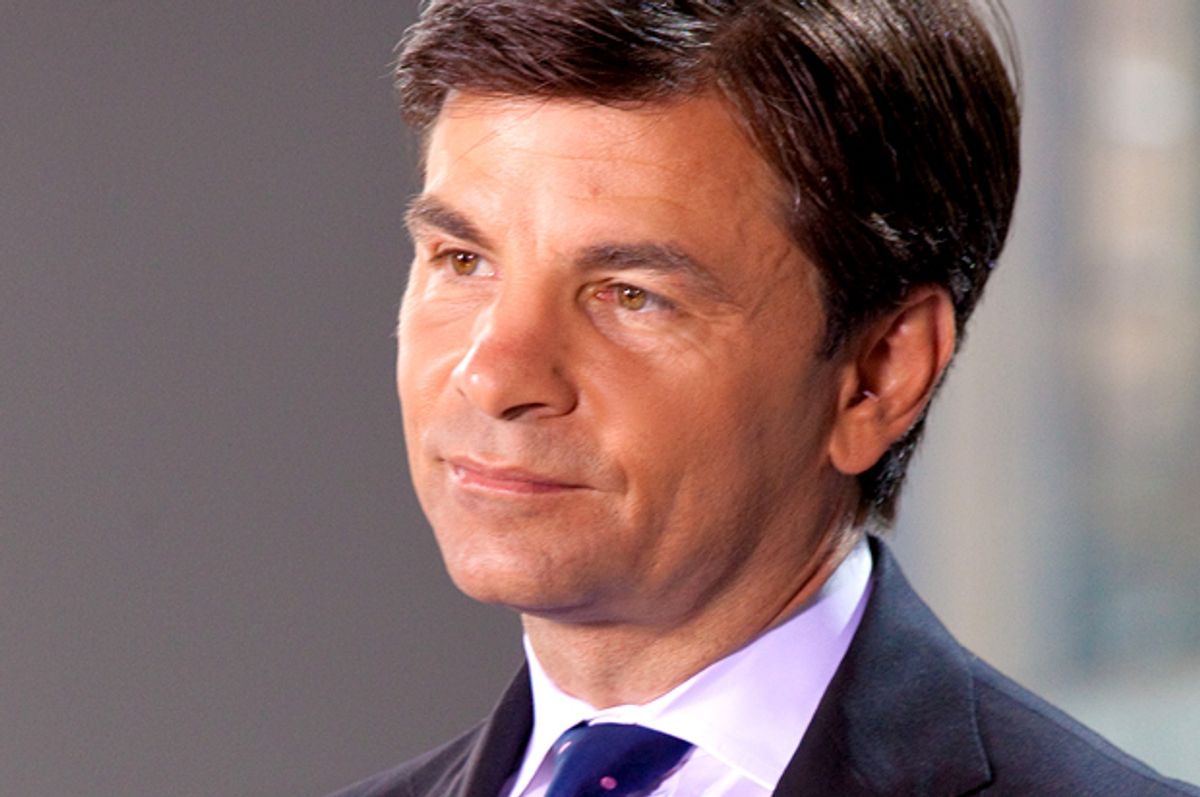 So George Stephanopoulos stepped in it. He donated $50,000 -- or, sorry, that's $75,000! -- to the Clinton Foundation and didn't disclose this in his coverage of the recent controversies swirling around the family charity. As with Hillary Clinton's scandals surrounding donations to the Foundation and her use of private email, or Jeb's Bush's agonizing four-day process of answering a simple question about Iraq, Stephanopoulos's error is the latest example of a veteran figure somehow being unable to anticipate the obvious.

Stephanopoulos has apologized for not disclosing these donations and recused himself from moderating any GOP presidential primary debates. It's not entirely clear why this should have been the factor that led Stephanopoulos to that decision. It is a well known fact that Stephanopoulos served in the Clinton administration, and that he chit-chats with fellow Clinton veterans Rahm Emanuel, Paul Begala and James Carville on the phone almost every day. And while non-disclosure is a problem, it's fascinating that donations to the Clinton Foundation are now considered controversial in and of themselves. Most rich people, Republican or Democrat, have made charitable donations to the Clinton Foundation, and not all of these donations qualify as de facto campaign contributions.

But anyway, they got rid of George Stephanopoulos. A nice, clean hit. There's one "librul media reporter," -- in conservative parlance, this means any member of the mainstream media -- who won't get to sabotage the Republican party ahead of the 2016 election.

Is that really a good thing for the individual debaters themselves?

The mainstream media moderator serves a useful function in Republican presidential debates for the candidates. It offers them a pivot point, or a means of getting out of a corner. If a mainstream media moderator asks a difficult or uncomfortable question, the Republican candidate can simply badger the moderator for pursuing a stealth liberal agenda. Whenever the candidate is on the verge of embarrassing him or herself, he or she can lash out at the moderator for trying to embarrass the cause of conservatism as a whole. All of the Republican voters in the audience are conditioned to hoot and holler with approval whenever this happens.

It's not enough to say that Newt Gingrich wielded this tactic from time to time during his 2012 presidential campaign. It's more that he made yelling at mainstream media figures the centerpiece of his campaign. If you find yourself constantly lashing out at the mainstream media's bias against you, that's a good indication you're carrying around reams and reams of baggage for which you have no legitimate answer. But it doesn't matter.

The most famous example of this  was his interaction with CNN's John King. John King is the second most ideologically vacant vehicle within the mainstream media, behind his colleague Wolf Blitzer. Interacting with him is akin to interacting with a piece of wood. If he is somehow motivated by a desire to destroy the Republican Party's electoral chances, he does an impossibly good job hiding it.

In January 2012, in a South Carolina presidential debate, King opened with a question for Newt Gingrich about one of his ex-wives, who was going on television that day to air some dirty laundry from their marriage. Newt Gingrich was prepared for this.

Gingrich’s now-famous response practically blew back King’s hair. "I think the destructive, vicious, negative nature of much of the news media makes it harder to govern this country, harder to attract decent people to run for public office,” he said to thunderous applause during the forum in Charleston, S.C. “And I am appalled that you would begin a presidential debate on a topic like that."

To even more enthusiastic applause, the former House speaker added, "I am tired of the elite media protecting Barack Obama by attacking Republicans."

The GOP is culling the field of potential debate moderators this cycle, in addition to cutting the overall number of debates. Fox News will co-sponsor several debates, and conservatives like talk-radio host Hugh Hewitt will serve as moderators. This might seem like good news to the candidates at first. The liberal saboteurs will be vanquished! But it eliminates their escape hatch. It's much harder to yell at a Fox News host or a Hugh Hewitt about how they're protecting Democrats. Just look at Jeb Bush's nightmare this week: it all kicked off with a question from Fox News' Megyn Kelly. He couldn't exactly call her question idiotic, or a favor to the Democrats.

They're going to miss George Stephanopoulos. He's too easy!