Bush can’t say the invasion was a mistake, even knowing what we do now, because WMDs weren’t the reason behind it 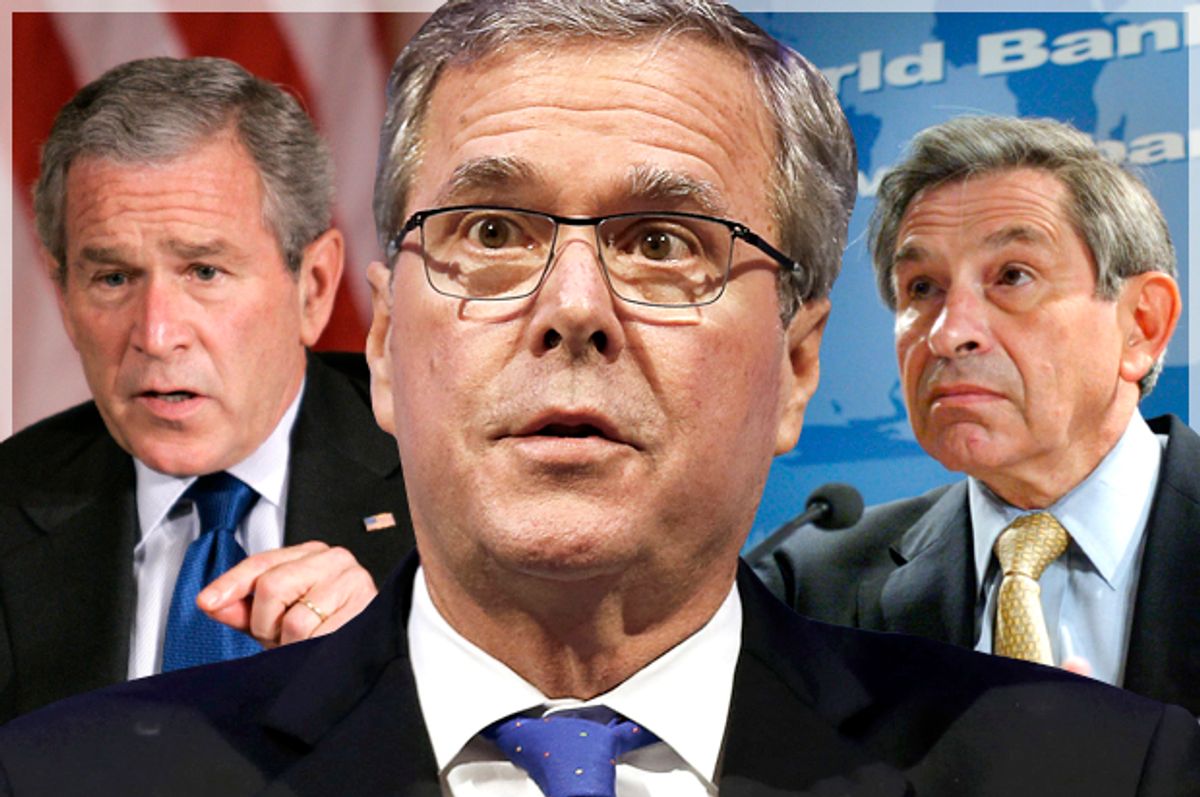 First, let me give Jeb Bush credit for one thing: He’s forced the rest of the 2016 GOP presidential field to say that knowing what we know now, invading Iraq and toppling Saddam Hussein was a mistake. In 2008 and 2012, only Rep. Ron Paul would say anything like that.

Bush’s inability to give a clear answer to that question – it took four tries – is widely attributed to his unwillingness to disrespect his brother, and/or his terrible skills as a campaigner. But this misses the point. Bush had a hard time saying that the invasion was a mistake, even with what we know now – Iraq had no weapons of mass destruction, Saddam Hussein had nothing to do with 9/11, and toppling the dictator would smash the country into warring pieces – because he, and his core national security advisors, may well not think it was.

We seem to be suffering from collective amnesia when we act like the lack of WMD was a big “surprise” that Bush and the 2016 field must now reckon with, one that means the invasion was a tragic mistake. In fact, the Bush intelligence team cooked the books to either create or exaggerate the evidence at the time, to sell us a cruel war of choice.

Karl Rove stepped into the mess Friday morning on the “Today” show, where he reassured his audience that Bush will recover from his bad week. "He's a very smart guy. He's not a guy who needs the lesson taught to him twice,” Rove told Savannah Guthrie. But that’s demonstrably false. First, Jeb flubbed the big foreign policy speech orchestrated to show he’s different from, and smarter than, his big brother: he confused Iran and Iraq, exaggerated the size of ISIS, mangled his description of ISIS leadership and mispronounced Boko Haram. He sounded like a nincompoop.

Then this week alone, he’s had to be taught “the same lesson twice,” contra Rove, since it took him four tries to get his Iraq answer “right.”

Of course, the fun part of the story is what Gail Collins nailed Thursday: Wow, Jeb Bush is awful. The Bush III rollout has blown up a cliché of American punditry for the last 15 years: that the wrong brother won the White House, that Jeb was supposed to be president, only he lost his first race for Florida governor while George W. won in Texas. Oh, cruel fate. But in fact, Jeb looks terrible at this politics business.

Now, it’s great to see the GOP contenders trip over themselves to capitalize on Bush’s errors and declare his brother’s war a mistake. It’s forced them out into the open, beyond simplistically blaming President Obama for not finishing the job. But even as they do, they foster our collective amnesia about what happened.

Sen. Marco Rubio, who looks to be a prime beneficiary of Bush’s stumbles, tried to humiliate him by saying that even his brother had admitted, knowing everything we now know, that he made a mistake. “Not only would I have not been in favor of it, President Bush would not have been in favor of it," Rubio told the Council on Foreign Relations.

That’s not true. The former president has admitted to mistakes in the war’s execution, the occupation and its aftermath. He has lamented the terrible intelligence his administration shared in the lead up to the invasion. But he himself has never said: If I knew then what I know now, I wouldn’t have done it.

Quite the opposite. In his memoir, he admitted to tactical mistakes, but stated forthrightly: "The region is more hopeful with a young democracy setting an example for others to follow. And the Iraqi people are better off with a government that answers to them instead of torturing and murdering them."

He added: "There are things we got wrong in Iraq, but the cause is eternally right."

Dick Cheney certainly agrees. Paul Wolfowitz, one of Jeb's advisors, blasts the aftermath of Saddam’s fall, and the wholly incompetent occupation – the reign of Paul Bremer and Dan Senor and fresh-faced 20-something ideologues from the Lincoln Group trying to govern Iraq – but not the decision to wage war itself. There were lots of things the Bush team might like to do over, but the invasion isn’t one of them.

The Cheney-Wolfowitz-Rumsfeld faction saw an Iraq invasion as a brilliant stage on which to enact all of their geopolitical goals: It was a chance to replace a Middle East adversary with an ally; to ease our reliance on Saudi Arabia for defense and for oil, and to develop a strategic counterweight to Iran. It was also an opportunity to declare the U.S. would wage pre-emptive war, to showcase our military might in the aftermath of 9/11, and to shore up Cheney’s doctrine of vast, presidential power. The WMD argument was either just one of many concerns, or an outright fabrication.

So let’s be fair to Jeb Bush for a moment: he can’t get this answer “right” politically – as in, now that we know there weren’t WMDs, and the aftermath was a shit-show, the Iraq invasion was a “mistake” – because it probably isn’t what he believes. Let’s remember, he was one of 25 signatories to the founding document of the pro-invasion Project for a New American Century in 1998 -- alongside Cheney, Rumsfeld, Scooter Libby, Elliott Abrams, Norman Podhoretz, Frank Gaffney and other neocons. Wolfowitz is one of his foreign policy advisors. He has told us that when it comes to Israel, his brother is his top advisor.

The truth is, Bush didn’t exactly flub his first answer to Megyn Kelly; in saying he'd do it all over again, he told us some of what he really thought. Ironically, if he knew then what he knows now -- that his answer was hugely unpopular -- he wouldn’t have given that answer. So he said it was a mistake. Then he said it wasn’t. Then he said it was. He’s going to be writhing like this for a long time, because he can’t satisfy all the factions that are trying to unite behind him by telling the truth. Whatever it is.