How university trigger warnings will backfire: Does Fox News need any more ammunition against the humanities?

Greek and Roman myths are violent and ugly, sure. But apologizing for art — especially the classics — is a bad idea 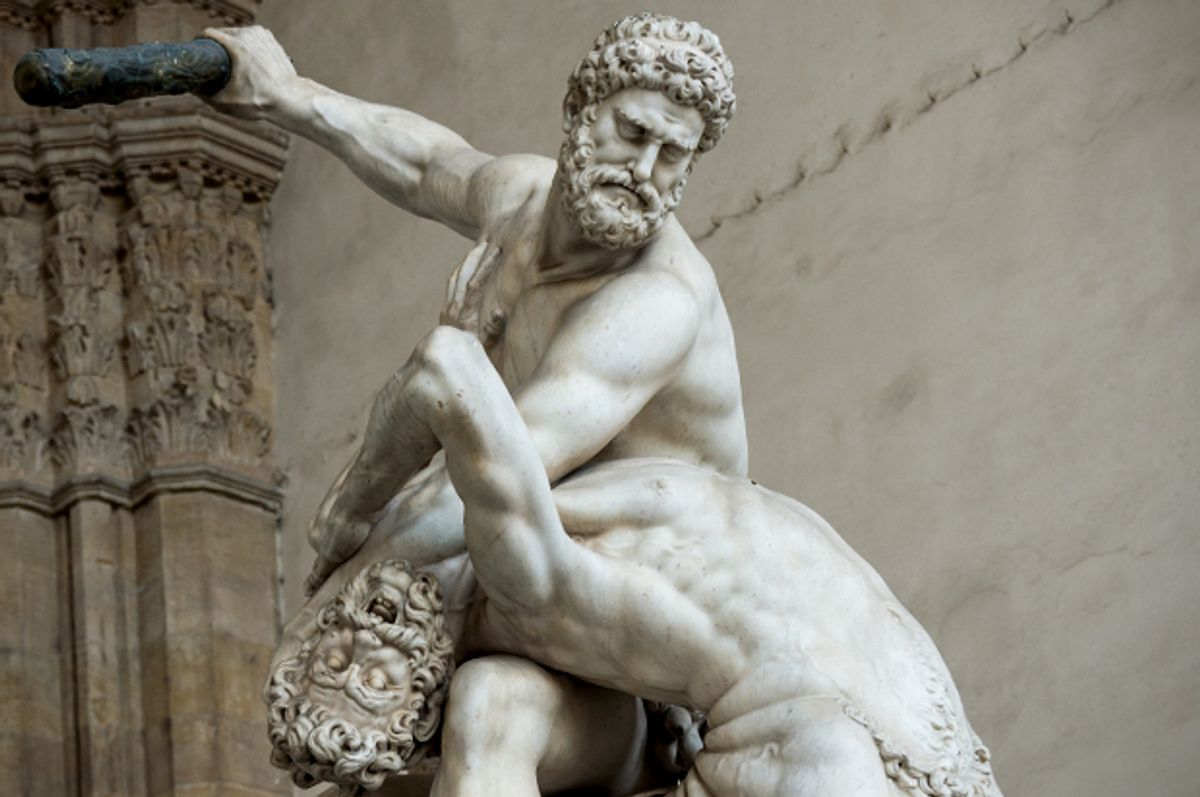 Hercules and the Centaur (Italianvideophotoagency via Shutterstock)
--

A band of enraged women tear a young king limb from limb. An eagle eats the liver – over and over again -- of a god, chained to a mountain, who was foolish enough to help out human beings. A distraught king lays his own mother and rips out his own eyes. Rapes happen nearly as often as the sun rises. The wife of an emperor poisons her rivals. Another emperor has sex with one of his sisters and pimps out the others. And on and on.

If you read ancient myths, plays, or histories this is the kind of thing that comes up again and again. (Some of the operas or television adaptations – see “I, Claudius” -- made of this stuff is even gnarlier or more graphic.) If you’ve had an old-fashioned kind of liberal arts education – the kind where you either chose or were forced to take “western civ” class heavy on Euripides, Ovid and other Greek and Roman classics – these are mostly images you already know. In a lot of American high schools, you probably read the Oedipus plays and maybe the Yeats poem “Leda and the Swan.” You probably studied mythology – though probably a version as sanitized as the softened-up Grimms tales you were offered – in elementary school.

But these days, it seems, this stuff needs special handling. Four students at Columbia University – the school that pioneered the core curriculum based around the classics – wrote in the college paper:

Ovid’s ‘Metamorphoses’ is a fixture of Lit Hum, but like so many texts in the Western canon, it contains triggering and offensive material that marginalizes student identities in the classroom. These texts, wrought with histories and narratives of exclusion and oppression, can be difficult to read and discuss as a survivor, a person of color, or a student from a low-income background.

So now not only do “The Great Gatsby” and “Things Fall Apart” require trigger warnings, but the work that makes up the basis of pretty much everything in the Western canon — that includes the Toni Morrison novels that the authors rightly admire — especially if you consider the Bible, with its incests and rapes and killing floods and ruined towns, as an extension of classical literature. We’ve been here before, of course, and it didn’t end well then, and probably won’t this time either.

Remember when Stanford students chanted “hey-hey, ho-ho, Western culture's got to go?” Instead of an expansion of the canon to include more women and people of color – which was overdue and occurring at progressive universities back East – we ended up with a world in which the humanities themselves were dismantled. Stanford in particular became a taxpayer-supported factory for little libertarian disruptors like the Paypal mafia; Zuckerberg and Thiel, not Hemingway or Virginia Woolf, became cultural heroes. On the Tea Party right, Western civ has come to be seen as an irrelevance. “I’m going to adjust my educational curriculum to what business and commerce needs,” Gov. Pat McCrory of North Carolina has said. (No women’s studies for his state.) If a powerful right-wing businessman gets his way, the state’s flagship university in Chapel Hill will see much of its humanities curriculum replaced by either “pragmatic” courses or seminars on the work of Ayn Rand.

Back to the trigger warnings. There’s a reasonable argument that says, Why not warm people about shocking work assigned in class? What’s the harm in it?

The culture wars that raged in the Bush I years – Lynne Cheney, “Piss Christ,” the Robert Mapplethorpe exhibit – have cooled down significantly: We’ve moved to a state of Cold War on the culture front. But as with a war of any temperature, the worst thing you want to do is give the other side ammunition, which is what this trigger-warning issue is shaping up to be. This kind of thing allows the right to paint college students and advocates of multiculturalism as over-sensitive crybabies, which is already an attack they know well. Did we put trigger warnings up because of art that was designed to be offensive or at least provocative?

People on the political left and the hipster-and-hip-hop side of the spectrum – Thurston Moore, Chuck D – flipped their lids when Tipper Gore’s PMRC tried to put warning labels on albums with sex and violence. Musicians, music fans and liberals in general defended the rights of rockers like Marilyn Manson and rappers like 2 Live Crew to rhyme about whatever they wanted. It was all about freedom of speech back then.

Teenagers and college students these days live in a world drenched in sex and violence; if they have cable connection or a cell phone they’re exposed to a vastly harsher and more profane world than the X’ers and Boomers or Silents who either eagerly read or slept their way through their Western civ requirements. Why start protecting students from Ovid in a TMZ world?

So it’s not just the wrong way to go – it’s awful PR for those of us who think literature and the liberal arts matter. You are giving the reactionaries at Fox News – who hardly seem invested in Sophocles or Suetonius – a cannon’s worth of ammo against the “political correct” campus left. And you are treating some of the greatest, most resonant, and, yes, most painful work in the history of humanity as something we need to apologize for.