Jon Stewart vs Sean Hannity: We all know who the real "sanctimonious jackass" is

Oh, how funny it is when a Fox News blowhard tries to take down "The Daily Show" and just embarrasses himself 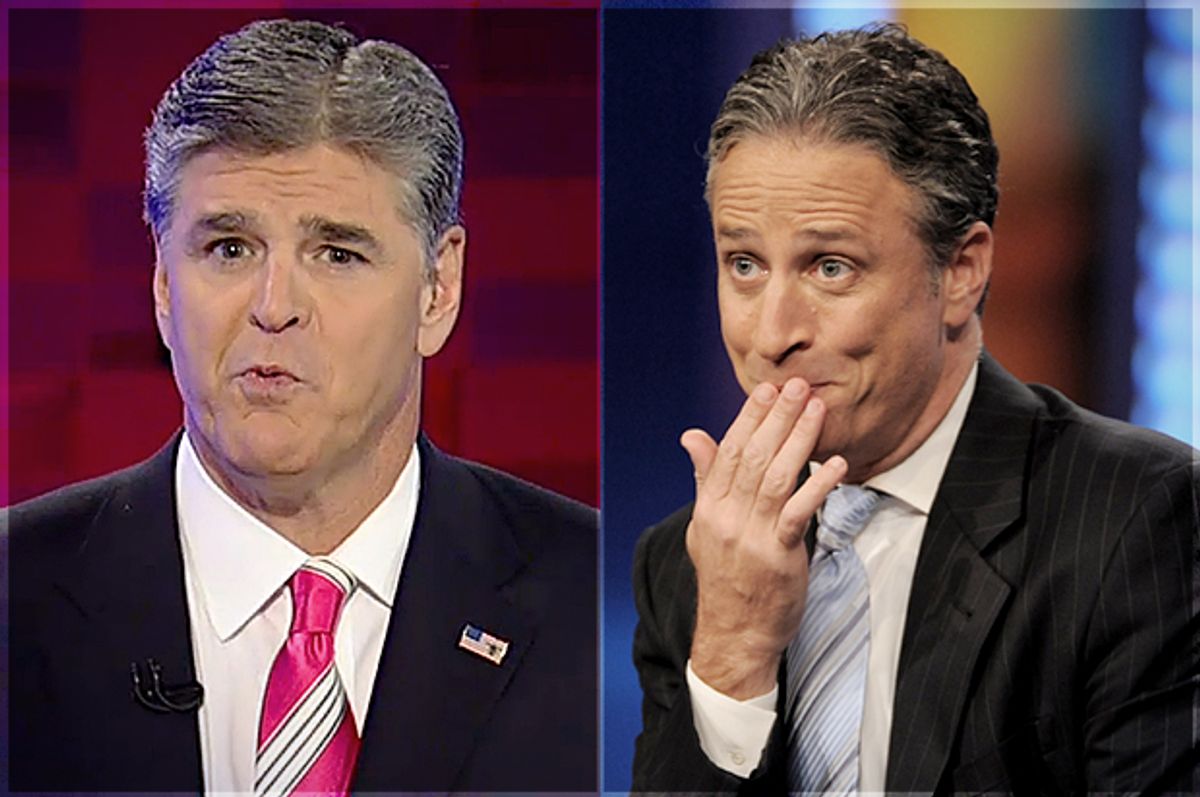 First, he claimed that his coverage of spring break excesses in Panama City Beach had led the city council to pass a ban on beach drinking. And second, he suggested that this proves that Jon Stewart -- and all liberals, for that matter — don’t really care about people. He cited the news as “evidence of the left’s hypocrisy; they don’t really care.” Referencing the way that Stewart had mocked his weeklong coverage of spring break the year prior, Hannity went on to call Stewart a “sanctimonious jackass.”

But the real sanctimonious jackass in this story is Hannity. Let’s start with Hannity’s choice of epithet, since it is there that we can discover the core of the debate. Hannity chose to marry two key concepts: the idea of being morally superior to others (sanctimonious) and the idea of being a stupid person willing to perform stunts in order to look cool (jackass). It’s really an amazing insult when you think about it -- because it defines precisely all that is wrong with Hannity’s public persona.

Hannity was thrilled to be able to report that something on his show had a real-life impact. Too thrilled, really, since his glee reminds us how rare it is for his show to report anything that is remotely news-like. His reaction, though, is proof of his need to reiterate that he is above others — especially liberal adversaries like Stewart. And then there are Hannity’s innate jackass qualities — his constant need to call attention to himself even when doing so simply makes him look like an idiot.

It’s not surprising that Hannity chose this one moment when his show’s coverage may have done some good to go after Stewart. Hannity had long been a target of Stewart’s sharp satire. There was the time that Stewart busted Hannity for using fake footage to exaggerate the crowds at an anti-health care reform rally in November 2009, causing Hannity to make a rare on-air apology. Stewart has also repeatedly gone after Hannity for his racist coverage of Obama and his constant need to refer to Obama as “the worst president ever.” Then there are Hannity’s repeated appearances on "The Daily Show’s" Moment of Zen. (For example, see this and this.)

But the best showdown between them was over Hannity’s embrace of Cliven Bundy. Bundy, as you may recall, was a Nevada rancher who refused to pay grazing fees on federally owned land. The dispute began back in 1993 when Bundy began protesting the fees by refusing to renew his permit. The standoff reached a peak in March 2014 when the Bureau of Land Management closed down acres of land to capture trespassing cattle and caused Bundy supporters to stage armed protest. Hannity quickly moved to champion Bundy, showcasing him as a patriot.

Hannity’s support of Bundy was covered by Stewart on three consecutive days. At the heart of Stewart’s critique was the fact that Hannity seemed to be excited by the idea of Bundy’s disrespect for the law — when Hannity himself often went after immigrants and student protesters for not obeying the law. Stewart also showed astonishment that uber-patriot Hannity would defend a man who explicitly claimed that he did not recognize the U.S. government as existing.

Bundy wasn’t just an anarchist; he was also an outright racist. Shortly after the protests he was quoted saying about black people, “I've often wondered, are they better off as slaves, picking cotton and having a family life and doing things, or are they better off under government subsidy?” Even though Hannity called the racist remarks repugnant, he still defended his view that Bundy had exposed “government overreach.” Of course, given that Hannity paid $300,000 for a portrait of Obama burning the Constitution, we might wonder the extent to which he personally links racism and dislike for government.

The feud over Bundy took place a couple of weeks before the Hannity spring break coverage in 2014 — and clearly creates the context for Hannity’s attack on Stewart now. On day three of Stewart’s satire of Hannity’s coverage of Bundy he dissected Hannity’s hypocrisy on the Bundy issue and referred to the Fox News host as “The Arby’s of news.” But what really irked Stewart was Hannity’s constant need to moralize and judge others:

“I just can’t believe that in this day and age, with all that we know, that this s*** is out there. That humanity, that our society is still weighed down by these burdens of a seemingly more medieval time. Like your show. To see it night after night serving up the same s***.   …. What is so fascinating is the paradox at the heart of your show. That your purely blind partisan impulses are couched in such lofty principle.”

Stewart uttered these words only a couple of weeks after pointing out the absurdity in Hannity’s coverage of spring break last year. Despite a thin patina of offering an exposé on the dangers of spring break debauchery, Hannity’s show seemed to glory in the opportunity to show clip after clip of attractive women wiggling for the camera.

Hannity’s coverage bundled a bizarre moralizing about the bad behavior of poorly parented girls with a voyeuristic urge to keep watching them. Stewart mocked the way that Hannity’s guests all admitted to basically doing the same thing when they were young, and he revealed the gross gender stereotypes that had male guests say they wouldn’t let their daughters go, but would send their sons off with money.

As if this weren’t proof enough that Hannity’s crew were using this segment to ogle young women in bikinis while reinforcing puritanical sexual standards, Stewart pointed out that they even did an in-studio beer bong demonstration where his guest encouraged the woman doing it to bend her knees more while Hannity watched. To paraphrase Stewart, “Ewwww.”

Those parts of Stewart’s satire are missing from the clips that Hannity is showing now as proof that Stewart is a “sanctimonious jackass.”  Hannity is also forgetting the fact that it may not have been his coverage that made any sort of difference. CBS reports that the Panama City Beach officials have struggled for years over better laws.  In fact, they reported on the abuses of Panama City Beach spring break partying back in 2002.

But, if you are Hannity, the real story here is that his show may have had some actual reporting of social significance. We can be pretty sure that Stewart would agree with him that passing laws that can protect college students on break is a good idea. And we can be sure that Stewart would welcome a Fox News story that was not just true, but also meaningful.

That, of course, is where Hannity gets Stewart wrong. Stewart’s satire was aimed at Hannity and his Fox News hubris, not at college students. He was using the segment to go after the Fox News habit of replacing news with scandal, hype and aggressive partisanship. But Hannity doesn’t see that. Just like he doesn’t see that his on-air delight in exercising moral authority by calling Stewart a “sanctimonious jackass” makes Hannity the bigger one after all.