How "Game of Thrones" ruined Loras Tyrell: HBO's “gay cartoon” is so much more in the books

George R.R. Martin wrote Loras as roundly as any other Westerosi man, but on HBO, he's just Maergery's gay brother 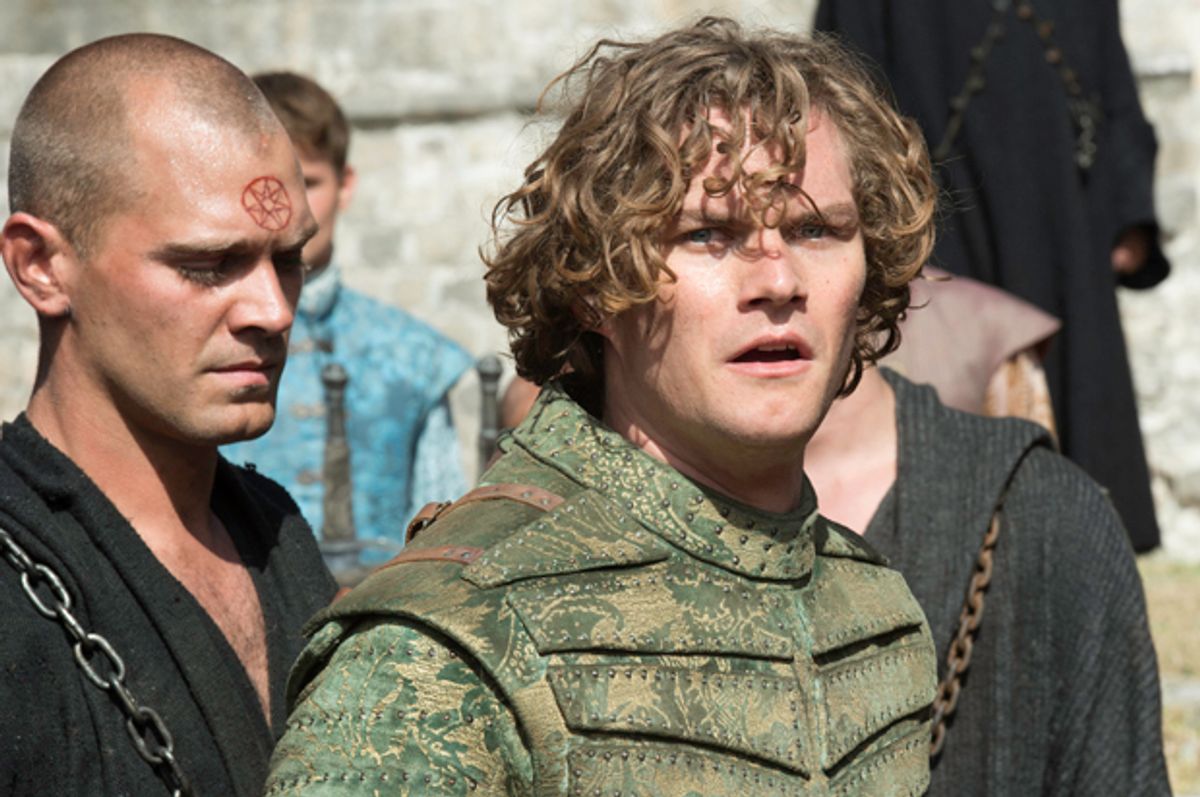 Note: This story contains spoilers for George R.R. Martin's "A Song of Ice and Fire" books, which may or may not be spoilers for HBO's "Game of Thrones."

In the fourth episode of this "Game of Thrones" season, Loras Tyrell was arrested by the Faith Militant for the crime of being gay, and the reaction of the fandom was not very happy.  On Reddit’s "A Song of Ice and Fire" page, user ZMoser said that, as a gay man, “I'm offended, I'm disappointed, and I'm pissed” that the writers of "Game of Thrones" went for this plotline, and no less than 1900 people chimed in with their agreement. Even George R.R Martin’s editor Jane Johnson got into the debate, tweeting that “I've never been happy that they made him a gay cartoon in the tv series.” So how did we get here?

To begin with, part of the reason why Loras was singled out is that previous decisions made by the showrunners left them with fewer options going into Season 4. As George R.R Martin has noted repeatedly, his plots are very complex and the more Benioff and Weiss change them, the more unexpected consequences develop further along in the series.

For example, way back in Season 2, the showrunners decided to have Loras Tyrell be the only male heir of House Tyrell — partly this was done to avoid exposition, and partly to avoid having to cast seemingly unimportant characters, like his older brothers Willas and Garlan. After all, there’s no reason why it can’t be Loras who wears Renly’s armor at the Battle of Blackwater — it works rather well to have Loras avenging his dead lover in Renly’s own armor — and it's easy enough to replace Willas with Loras as Sansa’s Tyrell betrothed in Season 3. The problem, though, is that as heir to Highgarden, you can’t have Loras choose to be in the Kingsguard as he did in the books, which creates a subplot between Jaime and Loras where Jaime sees echoes of his younger and more arrogant self in the young knight, and is important for Margaery and Cersei’s face-off later on. So instead Loras has to be betrothed to Cersei, and since Cersei doesn’t want to marry him, having him imprisoned is a logical solution (although I have also speculated that the once and former Queen Regent might name him to the Kingsguard as a way out of the marriage contract, thus incurring the wrath of House Tyrell).

Likewise, the decision to make Margaery Tyrell older than she is in the books and to have her consummate her marriage to an older Tommen Baratheon means that the plot that Cersei hatches in "A Feast for Crows," to have Margaery arrested by the Faith Militant for adultery on the grounds that she’s missing her hymen and she clearly didn’t consummate her marriage with a nine-year-old, won’t fly for HBO. And since the showrunners decided to save money by cutting out the Kettleblack brothers (Cersei’s catspaws who falsely confess to sleeping with Margaery) or any other plausible patsy, there isn’t really a way for "Game of Thrones" to put Margaery in direct danger through her conflict with Cersei. So instead, they replace the Tyrell daughter with the Tyrell son, and arrive roughly where the books went.

But Loras’ arrest wouldn’t sting as badly as it does if the show hadn’t completely dropped the ball with his character over the last two seasons. In the first seasons, fans of "Game of Thrones" and of the books were treated to a rather complex and three-dimensional gay character — in Season 1, Loras was a skilled knight and teen heartthrob, sure, but also an ambitious politician who prompted his lover Renly to try to seize the throne when Robert Baratheon died; in Season 2, we saw Loras deal with the complicated relationship that ensued when his sister married his lover, we watched him wrestle with grief when Renly was murdered, and we saw Loras avenge Renly's death by donning his armor to fight Stannis and his army at the Battle of Blackwater.

And then in Seasons 3 and 4, the showrunners ran out of ideas that didn’t have to do with Loras’ sexuality. When he was engaged to Sansa, his main role was to be an awkward closet-case more interested in his wedding garb than his intended, and then he'd jump in bed with Olyvar and blab about the engagement, which allowed Littlefinger and the Lannisters to scotch the wedding. Once engaged to Cersei, his main role was to stand around and make small talk while his betrothed drank, snarked and rolled her eyes at him.

And once again, no small part of this has to do with the fact that, in the interests of saving time and money, Benioff and Weiss have cut story elements that gave Loras more to do. Since the Ironborn plot was removed in Season 5 and Margaery’s no longer an imprisoned “virgin” whose protector Cersei wants to side-line, there’s no need for Loras to engage in a desperate, high-risk battle to free up the navy to protect his homeland, only to fall into Cersei’s trap. Likewise, the showrunners decided to make Loras believe that Stannis, rather than Brienne, killed Renly back in Season 2, so there’s no need for Loras to have a conflict with Brienne in Season 4 when she ends up in the capitol. If the Loras in Season 3 and 4 had remained a complex and growing character who also happened to be gay, then his arrest by the Faith Militant would have a lot more promise, and wouldn’t come off as a one-note plotline about a character’s sexuality.

However, I have a sneaking suspicion that part of what prompted Loras’ arrest is, frankly, lazy shorthand writing. In the books, the Sparrow movement is a rather complex populist crusade – primarily, they’re motivated by the impact that the War of Five Kings has had on the civilian population, so they flood into King’s Landing to lay the “bones of holy men, murdered for their faith” ("AFFC") at the feet of Baelor the Blessed at the Great Sept and demand that either the king will uphold his part of the social contract  by sending men to put an end to the postwar banditry that’s devastating the countryside, or they will take up arms through the Faith Militant to defend themselves. Beyond that, they’re primarily focused at ending corruption within the Church (hence the stripping of the blasphemous High Sparrow, which parallels their treatment of Septon Ollidor in "AFFC"), and confronting the power of worldly wealth, which they feel has taken the place of spiritual values. To the extent that they have a social agenda, it’s kind of tertiary, and actually aimed at women rather than gay men — hence their arrest of Margaery and her Tyrell handmaidens for the libertine ways of the Reach, and the High Sparrow’s pronouncement that “all women are wantons at heart, given to using their wiles and their beauty to work their wills on men.” ("A Dance With Dragons")

However, most of HBO’s audience — especially in the U.S — isn’t familiar with a religious social movement emerging from the left rather than the right. The Occupy movement and the Sparrow movement have many similarities (the Sparrows physically occupy the square of the Sept of Baelor, for example), but religious fundamentalism isn’t one of them. Likewise, that same audience would probably not have much context for conflicts between state and church that deal with control over military and judicial power rather than culture war battles over abortion, evolution and gay marriage. But most of HBO’s audience would be familiar with fundamentalist movements that are vocally homophobic — so to spice up the montage where the Faith Militant take over King’s Landing, to really underline the scenes of the holy warriors breaking open wine barrels and smashing the idols of foreign gods, show them gay-bashing male prostitutes and arresting Loras Tyrell and they’ll get the picture.

But if the point is to rather crudely push audience sympathies in the right direction, I do wonder why the showrunners didn’t lean on the Faith Militant’s issues with women. Part of me thinks that perhaps they thought open displays of misogyny by the Faith Militant wouldn’t actually bother their audience as much as open displays of homophobia. Perhaps, in a show that hasn’t exactly been hesitant to show violence against women, they thought the audience wouldn’t be able to tell the difference.