Barack Obama's shocking TPP paradox: Why the gargantuan trade deal undermines everything he says he cares about 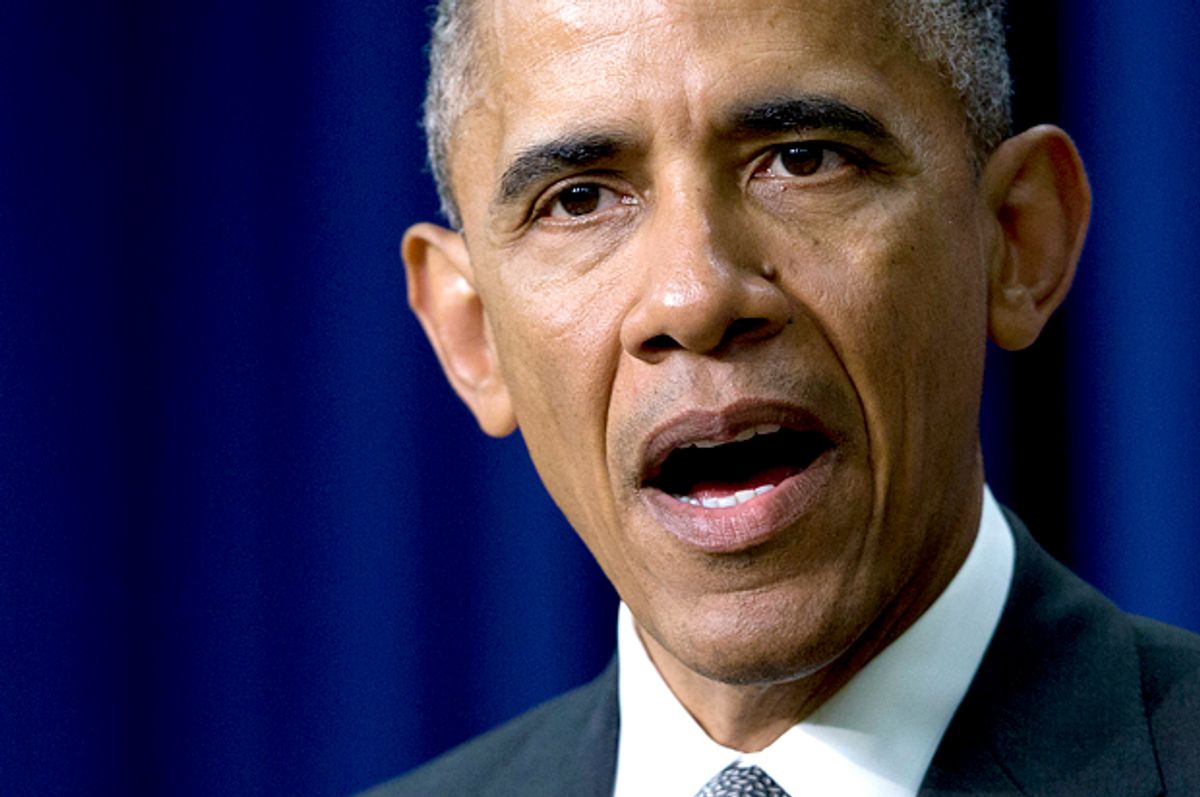 The Democratic Party's era of good feelings is over.

After more than six years of Obama-era party discipline and general accord, Democrats are finally suffering a measure of intra-party strife as the president appeals to congress for “fast-track” authority to more or less unilaterally negotiate the still-secret terms of the Trans-Pacific Partnership, one of the largest trade pacts in history.

A bloc of Congressional Democrats have so far stymied the president and balked at his request, and leaders of the liberal wing of the party have engaged in fairly unprecedented public dispute with President Obama. The party’s quarrel has presented Hillary Clinton with her campaign’s first big dilemma, as the former secretary of state does an ugly political dance, trying to reconcile her previously full-throated advocacy of the now-nettlesome trade agreement with the progressive revolt of the party base to whom she’s appealing in the primaries.

I could now list for you the play-by-play of the party’s internecine conflict: Sen. Warren and Obama sparring, with Sen. Sherrod Brown leaping in as Warren's tag-team partner; Blue Dogs battling their progressive party mates; and Sen. Bernie Sanders’ challenge to Clinton on the matter. But that’d be about as exciting a blow-by-blow as the Mayweather/Pacquiao fight. (Read: not very exciting at all.) No, instead we’ll look the most interesting internal battle of all: Barack Obama versus himself.

On April 28, the president took time out from a TPP-related press conference with Japanese Prime Minister Shinzo Abe to address the uprising in Baltimore, where fires still smoldered as the president and prime minister took to their podiums in the Rose Garden. This was as pitched a battle as Obama has had with himself yet on free trade: With the third largest economy in the world, Japan is a cornerstone of the TPP; but with the Maryland national guard rolling into Baltimore that very morning, President Obama had to take a lengthy detour from trade talk with Abe. The contrast is worth remarking upon, because Baltimore's problems cannot easily be separated from the problems of a corporate-friendly international trade deal.

Obama concluded his Baltimore aside with his most broad appraisal of the conflagration. “I think we, as a country, have to do some soul searching,” he said, concluding gravely and addressing the underlying problems that produce unrest. In addition to persistent racism, Obama was intent on explaining how worsening economic conditions in recent decades produce the desperation seen in the streets of Baltimore, lamenting “impoverished communities that have been stripped away of opportunity, where children are born into abject poverty...communities where there’s no investment, and manufacturing has been stripped away.”

Psssst. You’re supposed to be selling a trade deal, Mr. President! You probably shouldn't talk about how all the jobs went away, and made every American inner-city a post-industrial tinderbox, when you’re trying to ink a deal with countries with minimum wages of around 75 to 90 cents an hour. That’s the rate in Vietnam, another jewel of the TPP, and a country that makes corporations salivate -- unrivaled right now in its ability to attract U.S. manufacturers, from apparel (Nike, Gap/Old Navy, Ann Taylor) to automotive (Ford) to tech (Apple, Intel, and others).

Obama’s contradictory aside at the TPP presser was not an aberration, but only the most pronounced instance of his difficulty in reconciling the trade deal with his longstanding domestic concerns. It could be thought that Obama’s comments were rashly considered, as the president’s morning meeting with Abe followed a night of the worst civil unrest in more than 20 years; but after the president had had time to consider things, he addressed Baltimore again six days later and once again cited the calamitous effects of global capitalism on “manufacturing communities that have suffered after factories they depended on closed their doors.” While not ignoring the racial dimension of the recent series of urban revolts, Obama stressed the economic desperation of recent decades that’s led to a “sense of unfairness and of powerlessness...that’s helped fuel some of the protests that we’ve seen in places like Baltimore.”

Obama surely knows the particular case of Baltimore during the last several decades, what with “The Wire” being his favorite show -- and creator David Simon (whom the president recently invited to the White House) being quite clear about how the it's about “the triumph of capitalism over human value.” The problem of Baltimore is that of the globalization of the steel industry, leaving a once vibrant steel town as a now-hollow casualty to global trade. Obama and Simon appeared to be on the same page during their March conversation, lamenting the deindustrialization of Baltimore and its widely injurious effects on the city. Speaking of Baltimore and desperation in American cities generally, Simon offered that “this is not happening in a vacuum. These are the places in America where deindustrialization has had the most effect,” to which the president nodded knowingly and audibly concurred: “Right.” Obama's admission to David Simon occurred the very same week as the president's most aggressive shots yet at Sen. Warren in defense of the trade deal.

During the height of the uprising, Baltimore Orioles Chief Operating Officer John Angelos surprised many with his frank assessment of free trade as a culprit in Baltimore’s economic illness:

“[T]he past four-decade period during which an American political elite have shipped middle class and working class jobs away from Baltimore and cities and towns around the U.S. to third-world dictatorships like China and others.”

After four decades of intense globalization, the results are in: America used to make things, often in unionized and well-paid sectors, but cheap labor abroad -- accessed by corporations when free trade agreements hammer down tariff barriers -- have steered the U.S. toward a low-wage, non-unionized service economy. And yet the president, so readily vocal about the phenomenon, has made advocacy for a trade deal that challenges American jobs with dirt-cheap labor in Vietnam, Indonesia, and elsewhere his job lately. Obama is a skilled code switcher and rhetorician, but it’s rare to see him speak out of both sides of his mouth with such regularity as during his defense of the Pacific trade alliance.

In one of Obama’s more remarkable speeches on 21st century economic woes, December 2013’s address on economic inequality, he was explicit on the ill effects of free trade in recent decades:

Right! That’s been the problem. How, then, does the president turn right around and propose to introduce tens of millions more desperate workers to our race-to-the-bottom labor circumstance, even acknowledging the conflicting phenomena in the same speech? The TPP adds 11 more nations to an immense low-wage Pacific labor pool, of which China is already sort of a part since President Clinton established most favored nation status with China in the 1990s. Take a look at the tag in your shirt, your pants, coat, shoes. Flip over your laptop. Look behind your television. Chances are, none of it was made in the U.S., and it’s incredibly likely that the provenance involves TPP nations or most-favored-nation China. The shirt I’m wearing now was made in Indonesia, one of the TPP member states. Virtually every non-grocery item I buy is made in a country in which some manner trade deal makes its poor citizens accessible as wage slaves to multinational corporations.

Obama knows all this. He’s very articulate about it, even if it’s in nearly the same breath as his extolling of the TPP. But working Americans are not his only constituents; corporations must be contented too. So President Obama is at odds with himself, outwardly, vocally. Presumptive successor as party head Secretary Clinton, too, is already demonstrating that uncomfortable internalization of party strife, as the Democrats’ nascent populist turn, not yet a GOP-like civil war, turns Obama and Clinton against themselves.