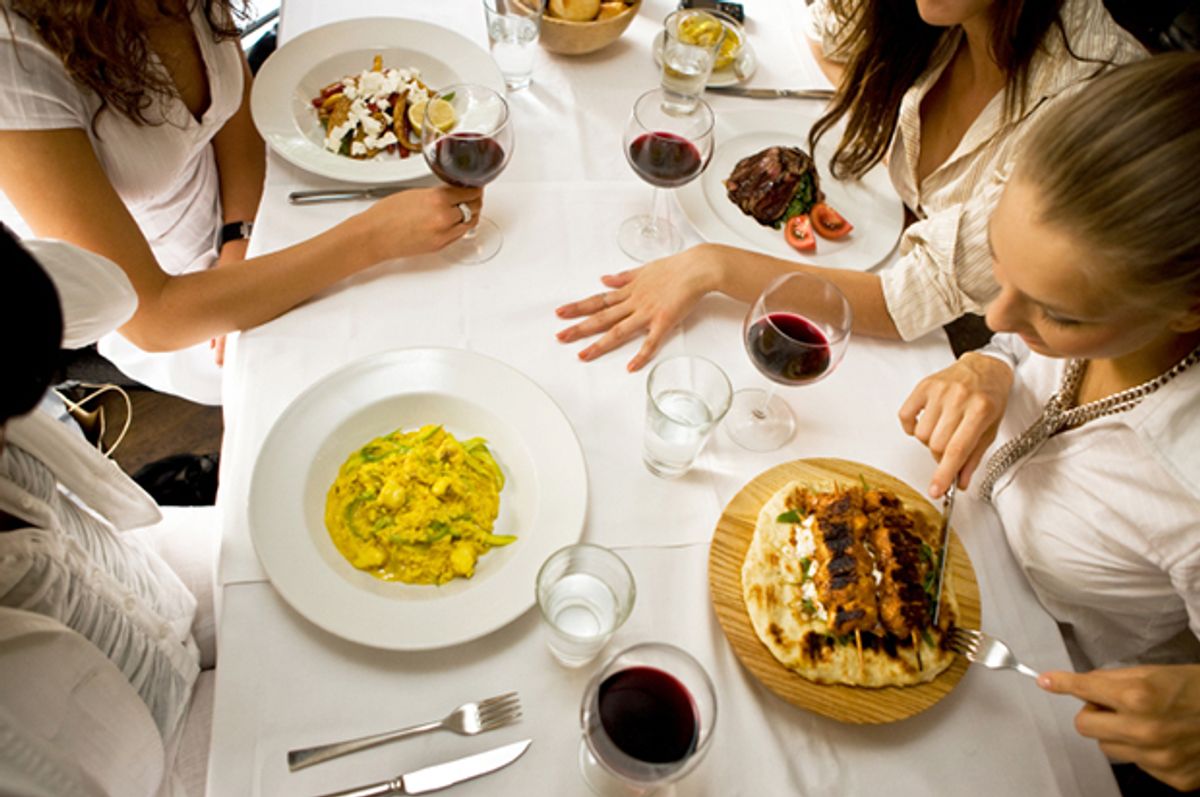 I'm not sure if this is what we meant by when we said we need to value the work women do as wives and mothers. In a fascinating and otherworldly glimpse into the lives of the extravagantly well-heeled, writer and social researcher Wednesday Martin — whose new memoir "Primates of Park Avenue" comes out next month — has written the mother of all pieces on how how the other half does motherhood.

From the first sentence of her weekend New York Times op-ed, Martin makes it clear she's writing about a world the majority of us know almost exclusively from "Gossip Girl" — Manhattan's Upper East Side. And it's one even she, after exploring "the lives of women from the Amazon basin to sororities at a Big Ten school" has found unique, a world inhabited by natives she calls "the Glam SAHMs" living in "a glittering, moneyed backwater."

Decades after Truman Capote skewered the socialites who wile away their afternoons at La Cote Basque, generations after Tom Wolfe described the "social x-rays" of the "Bonfire of the Vanities," their population endures, inhabited now, Martin says, not by mindless ex-debutantes but sharp cookies "with advanced degrees from prestigious universities and business schools" who engage in "exhaustively enriching their children’s lives by virtually every measure" and running "their homes (plural) like C.E.O.s." That rich, well-married women know how to work the social circuit while keeping their figures winnowed "to a razor’s edge" is not revelatory. The great surprise of Martin's observations, instead, comes from the peek into a sharply divided world where "husbands and wives sat at entirely different tables in entirely different rooms" and wives who perform their duties exceptionally receive financial bonuses from their husbands — just like any hard-working employee.

The monetary details "might be hammered out in a pre-nup or post-nup, and distributed on the basis of not only how well her husband’s fund had done but her own performance — how well she managed the home budget, whether the kids got into a 'good' school — the same way their husbands were rewarded at investment banks," or, as Martin's mom friends joke, might be based on "sexual performance metrics."

Martin makes clear where she stands on the concept, noting that "under this arrangement women are still dependent on their men — a husband may simply ignore his commitment to an abstract idea at any time," and calling the bonus-chasing wives "a lot like mistresses," but the reactions to her story have been divided. A post on the Independent Women's Forum says that Martin's neighbors seem to recognize "they are fortunate to have the options and opportunities they do, and are doing their best to raise their kids and enjoy their lives," while a highly upvoted comment on the Times site calls the story simply "Feminist drivel."

Martin describes being "thunderstruck" the first time she heard of the "wife bonus," but the idea of financially incentivizing a woman's domestic life is not, however, a new one. I remember several years ago, when I complimented a fellow new mother in Brooklyn for her sparkly new ring, she casually informed me that it was her "push prize" for delivering her second child. Parents.com actually has suggestions for push prizes, explaining that "It's a present your hubs gets you for carrying and generally pushing the baby out (and don't worry: C-section moms definitely deserve one too). Of course that gorgeous baby is reward enough, but if there's one person who deserves a little spoiling, it's a woman who's just rocked L&D." And the What to Expect site similarly asks, "Hoping to find a box from Tiffany & Co. tucked in your arms along with your brand-new baby? You're not alone. Push presents (a gift that a dad gives to a mom to commemorate the birth of their baby) are more popular than ever these days — they're a wonderful way for husbands to thank their wives for all they've gone through to bring a baby into the world… Drop enough hints to your hubby (maybe leave this push-present primer up on your browser?), and you may just get what you want."

And pre-nups famously reward or withhold based on wifely performance — Deion Sanders allegedly paid his wife a signing bonus of $100,000 for their prenuptial agreement, and Tom Cruise reportedly had different bonuses arranged for his wives based on the duration of their marriages. Women getting paid to be wives: say what you will about it, but it's been going on a long time.

Not every family needs two work-outside-the-home parents — especially if one of those parents has a career that requires extensive travel and socializing. But the dynamic of doling out monetary favors or withholding them based on the performance of one member of a marriage seems like a strange way to conduct a loving relationship. And as Martin's own experience proves, sometimes you don't need to go further than your own block to find the oddest mating rituals in the world.