Here's why people are so upset about the latest "Game of Thrones" rape: "So cheap, such an obvious choice, I felt offended as a fan" 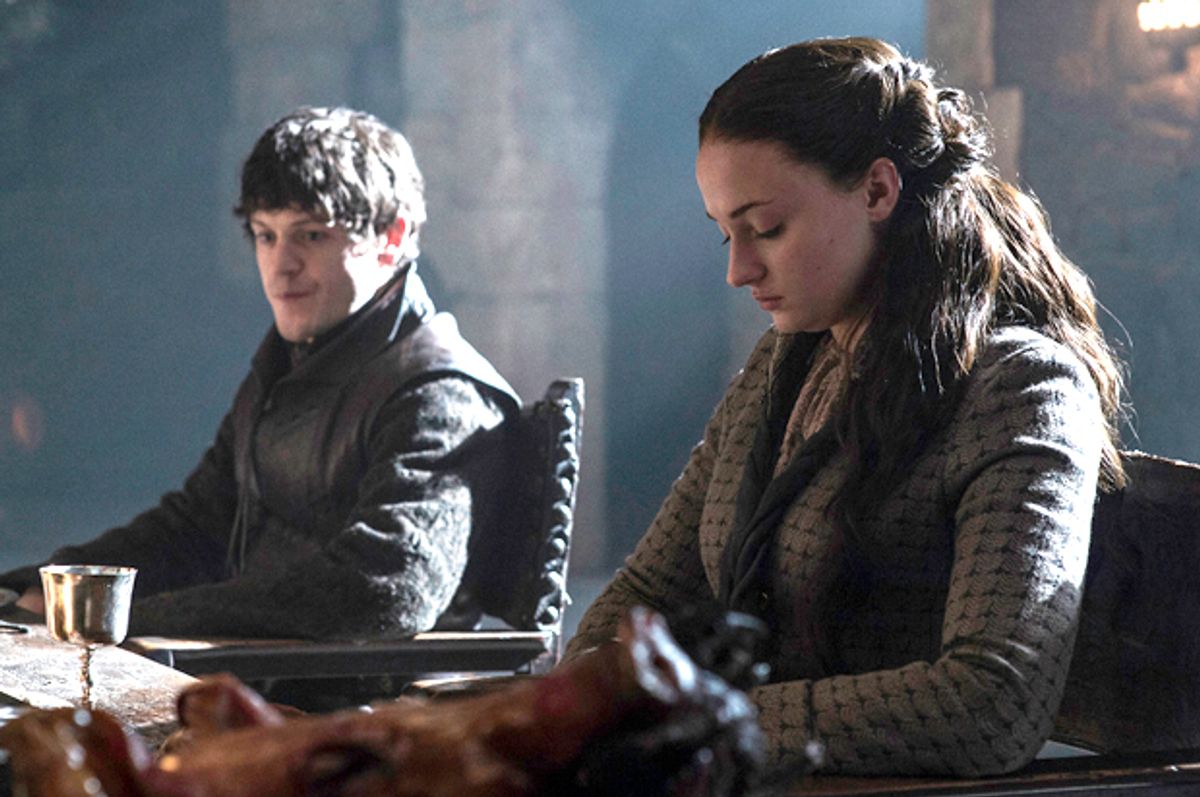 On last night’s episode of "Game of Thrones", Sansa Stark was raped by her new husband Ramsay Bolton, as Sansa’s childhood companion Theon (a.k.a. Reek) was forced to watch. The scene spurred instant outcry, with fans and critics wondering why this violent sexual assault was deemed necessary by the showrunners. As Vanity Fair's Joanna Robinson wrote, "Did we really need to see Ramsay Bolton rape Sansa Stark? No, we absolutely did not."

"Game of Thrones" is a show that doesn't shy away from brutality, from the horrors of the Red Wedding to Oberyn Martell's head getting crushed like a piece of ripe fruit. But fans and critics have taken particular issue with the show's sensationalist use of rape. Much like when Jaime raped Cersei last season, people were frustrated not just by the content of the scene, but at the fact that these scenes weren’t part of George R. R Martin's source material. At times, it can feel like D.B. Weiss and David Benioff are adding these gratuitous scenes of sexual violence purely for shock value.

In the books, last season's sex scene between Jaime and Cersei was depicted consensual (you can read a great take on the scene by Sonia Saraiya here). Likewise, Sansa was never raped by Ramsay in the books -- indeed, she doesn’t even marry Ramsay; that honor goes to a character named Jeyne Poole (although, for what it’s worth, much worse happens to Jeyne than what we saw onscreen here).

While a few critics have defended the scene, many more found it disheartening and disappointing. Here's what they have to say:

It’s a gruesome scene. We get it: Ramsay is the new Joffrey. But when is all this pain and misery going to transform the eldest surviving Stark into anything more than a damsel in distress? She got a Goth makeover, a badass new attitude, and has a network of Winterfell servants willing to come to her aid. Is she ever going to help kill any of these sickos? Or will she take the Jeyne Poole route and just stand by for help, again?

...this rape scene undercuts all the agency that’s been growing in Sansa since the end of last season. She was at the height of her power earlier in the episode when, stripped back down to her red-headed Tully roots, she told Myranda in no uncertain terms that Winterfell was her home and she would not be intimidated. It’s right in line with the Game of Thrones approach to storytelling that Sansa would have the rug pulled out from under her. (Have we forgotten Oberyn so soon?) But did it really have to be rape that brought her low? Is that really the only horror Game of Thrones can imagine visiting on its female characters?

But this begs the question; why should Sansa have to deal with such a thing at all? What character development could be wrung from this tragedy that could not have been created without a violent rape? Why does Game of Thrones — and so much popular entertainment — revert to this horrific crime when they want their female characters to “grow”?

It’s too soon to judge the effects of her marriage to Ramsay on her overall arc, and it’s possible that Sansa will find a way to exact revenge when Stannis show up. But my immediate feeling after Theon’s face cut to black and the credits started rolling was that, sometime in the last two seasons, Game of Thrones crossed the line between showing what a cold, hard world its women live in and abusing them past the point of being useful to the narrative, or even interesting. There’s a world of difference between Dany’s rape at the start of the series, a rock bottom one can and should compare to her next husband literally cowering at her feet, and the casual abuse experienced by Cersei in the fourth season and now Sansa in the fifth. Unlike the encounter between Cersei and Jaime last year, we’re at least meant to perceive Sansa’s experience as rape—but that’s about all that’s improved.

The show will probably actually lose some viewers for this. I won't be one of them just yet, but I'm extremely bothered by their choice -- their need, it seems, to continually alter Martin's story to include more rape. Putting Sansa into Jeyne Poole's place, and having her assaulted, raped and humiliated, was unnecessary. There have been numerous plot points and characters from Martin's novels that have been omitted from the series; I'd love to hear what the showrunners' arguments are for not only keeping the brutal assault of a young woman, but changing the storyline so that it happened to a beloved character. I'll be waiting for an explanation, but like Jaime Lannister's guilt, I'm not expecting it to actually arrive.

But I don’t think there’s really any storytelling acrobatics that can forgive what happened next, particularly when it all seems so clear where it’s going. Or was that itself the trick? That instead of giving the audience the sight of what we’ve long wanted and expected — Reek reclaiming his essentially not-terrible Theon-ness by stabbing Ramsay in the throat — we were given something not needed at all? Sansa’s anguished screaming as she was violently assaulted by her new husband was hideous, full stop. But it was almost worse the way Jeremy Podeswa’s camera lingered on Alfie Allen’s tear-filled eyes, as if his violation was somehow equal to Sansa’s; as if this disgusting act was somehow part of Theon’s long and ugly path to redemption, not a brutal and unwarranted violation. Five seasons in, Game of Thrones is long past the point of earning gold stars simply by showing us the worst possible thing. There’s a fine line between exposing the dirty truth of the world and wallowing in it.

Forcing her back into the role of victim and sexually humiliating her at the hands of yet another sadistic fiance adds nothing that we haven’t seen before, and indeed, feels regressive. All the forward momentum of her character development is undercut by this assault, transforming her back into the same little girl she was at King’s Landing, weeping as her dress was torn off. Shoehorning additional abuse and rape into her story at this point isn’t just upsetting; it’s boring and counterproductive. Poorly done, show. Poorly done.

But it also feels hateful on a narrative level. It’s cruel to strip Sansa of the agency she’s been accruing so painstakingly, but to do so by literally stripping her is so cheap, such an obvious choice, I felt offended as a fan. And if this means Sansa loses all her momentum, which has brought such a fresh energy to the show’s plot — I’ll be mad as a fan, not just as a feminist. I suppose this is what rape is: a blunt way of taking a woman’s selfhood. But if it’s going to be used as a plot point, I want it wielded more intelligently, with more care, and especially from a show that has proved it can do graphic violence so hauntingly. To show Sansa being raped as the kicker to an episode — and then to cut to Theon, as if it’s his view, his reaction, his internalizing of the moment that matters — just felt like more of the same old same old we’ve been getting since Ros died, since Tansy was hunted, since Cersei was raped.