Jay Z's war on the oligarchy: Hip-hop's biggest star gets radical in the age of Baltimore & Ferguson

America is beginning to notice what fans have known for years: Jay Z is more than just a business, man 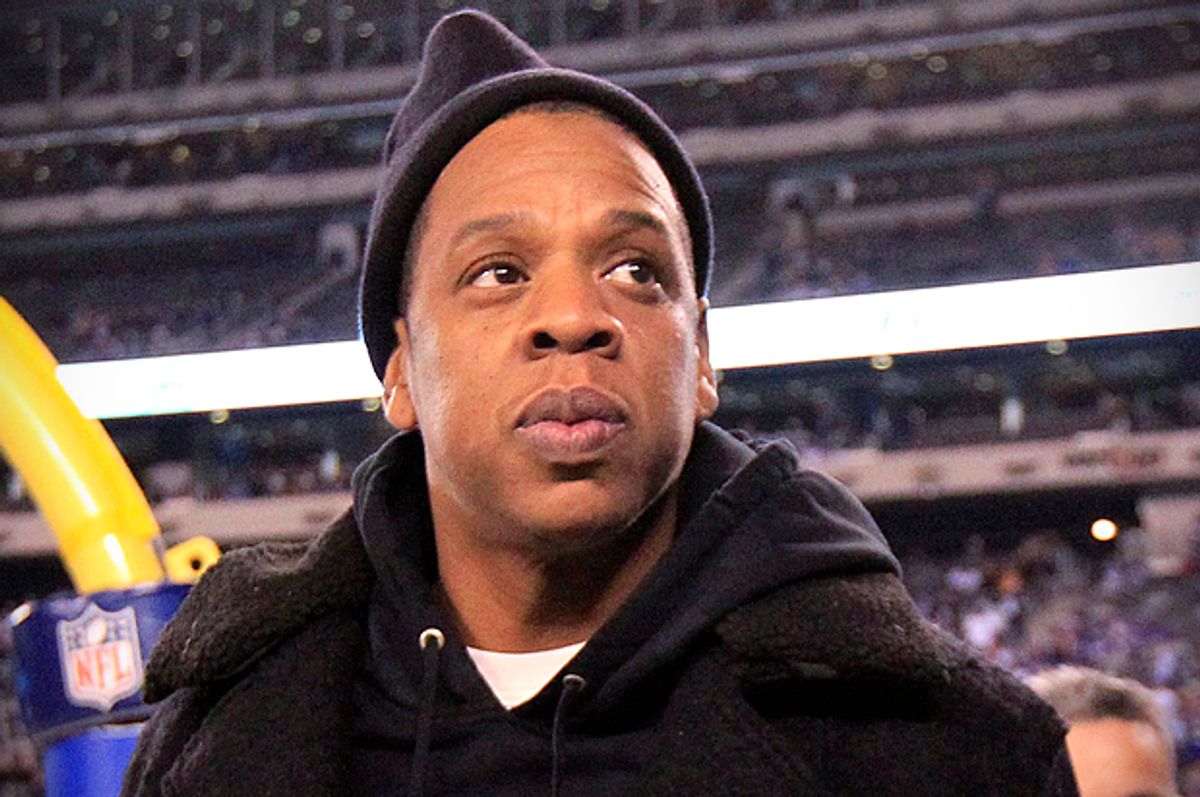 Activist, filmmaker and author Dream Hampton took to Twitter on Sunday to reveal that her longtime friends Jay Z and Beyoncé have been bankrolling black resistance movements in recent months, even emergency-wiring truckloads of money to bail out protesters rounded up by cops in the Baltimore rebellion and during last year’s Ferguson protests.

Notably, just one night earlier, during a much-anticipated concert, Jay Z stopped the music for a freestyle, in which he hinted at what Hampton would reveal the next day:

But I can't tell, like the way they killed Freddie Gray, right?
Shot down Mike Brown how they did Tray, right?
Let them continue choking n***as,
We gonna turn style, I ain't your token n***a.

To most, Jay Z is seen as the safe foil to the irascible and aggressive Kanye West. We mistakenly understand him to be a brand, a businessman, not anything like a radical. But as we learned on Sunday, Jay's style has already turned — his “token n***a” days are done.

Jay Z’s anger is not news to fans, however. It's not like Hov hasn't been warning everyone for some time now, revealing in bits and pieces the open secret of his radicalization. Though a bit problematic, Jay lent his fame to the Occupy movement early. In his 2014 "Open Letter," issued to both conservatives and the political establishment more broadly, he warned the power structure that “Y’all must wanna start a revolution" -- further articulating a hardening stance in the racial, economic and generational American schism that widens by the day.

The polemic continues: “Sorry, y’all, I don’t agree with y’all parents / Politicians never did shit for me, except lie to me, distort history.”

Jay Z has always been political in the broadest sense of the word, but after a more than 10-year beef with the GOP media-organ Fox News, he's become an active player in black resistance movements and the populist movement against oligarchic control. On his last five albums (at least), Jay Z has leveled specific, targeted attacks against conservatives, white supremacy, and economic inequality. (Listen to “Minority Report,” “Blue Magic,” “Off That,” “Murder to Excellence” and “F.U.T.W.” to hear his progression.) In a Kanye duet, “Murder to Excellence,” Jay describes an uncanny coincidence that he’s adopted to imagine himself as an inheritor of black radicalism, pointing out that he was born on the same day that Black Panther hero Fred Hampton was assassinated by the government: “I arrived on the day Fred Hampton died / Real n***as just multiply.” And so Hampton's revolutionary black power was born anew, the track contends, and even expanded, through the arrival of Jay Z just hours after Hampton's death.

Jay Z is no longer playing around. He used a 2013 appearance on “Real Time With Bill Maher” to offer a stark warning to power holders:

“I don’t really want to scare America, but the the real problem is there's no middle class, right? So that the gap between have and have-nots is getting wider and wider. Let me just finish this point because I do want to scare them a little bit: It's going to be a problem that no amount of police can solve, because, you know, once you have that sort of oppression, you know, and that gap is widening, it’s inevitable that something is going to happen.”

While Jay Z cared before, and did much to help the disadvantaged, he appears to have learned a more radical, subversive and, most important, effective means of attacking injustice. On his 2006 “Minority Report,” released just a year after the Hurricane Katrina disaster, Jay was already critical of the way he’d chosen to help New Orleanians. He might have given $1 million to help victims, but he realized that he was still participating in the very structures effectively maintaining the conditions in poverty-stricken New Orleans:

Sure, I ponied up a mil' but I didn't give my time
So in reality I didn't give a dime
Or a damn, I just put my monies in the hands
Of the same people that left my people stranded
Nothin' but a bandit, left my folks abandoned
Damn, that money we gave was just a band-aid
Can't say we better off than we was before

What this means is that in the still-nascent battle against state violence and hardening oligarchic control, the resistance’s soldiers are not all in the field. Jay Z and Beyoncé are moving into positions of leadership, along with such rappers as Kanye West and Meek Mill (recently engaged to Nicki Minaj), whose “Ice Cream Freestyle” is the most cogent and complete attack on the power structure delivered in some time. Premier rappers are lining up to meet with Minister Louis Farrakhan, whose Nation of Islam presents a radical alternative to establishment-oriented means of resistance. You’ve been warned, says Jay Z on his last album’s “Picasso Baby”:

“Eventually the pendulum swings / Don’t forget America, this how you made me.”