Inside the amazing world of "Mad Men" fan fiction, where Don and Roger get it on, and so do Don and Betty, and... 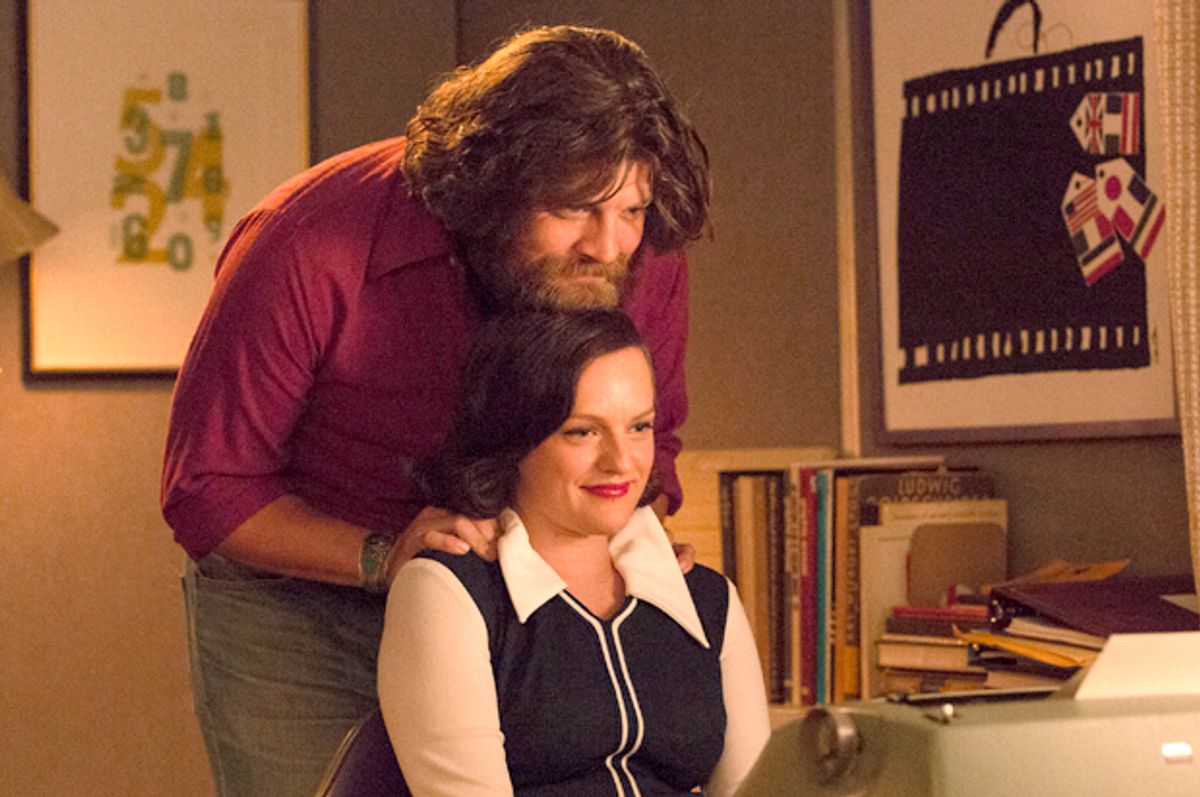 Jonesing for more "Mad Men" after the eagerly awaited series finale? Didn’t get enough Peggy and Stan—or enough hints of homoeroticism or threesomes?

So are plenty of fans who’ve been using their ad agency lust to create their own version of '60s office lust in the form of fan fiction, as befitting a show so full of sex appeal.

With the finale being touted as a variation of fan fiction by BuzzFeed and others, we’ve highlighted a selection of Sterling Cooper fanfic from FanFiction.net and Archive of Our Own to give you some alternative happy endings.

For the Peggy and Stan fans, “Loosening the Valve” by ShanghaiLily:

Stan's fingers were thick though, and his grip strong. He wouldn't let her go unless she wanted him to.

The force of his embrace made her skin ache, but Peggy didn't mind. It distracted her from her grief, because this pain had nothing to do with computers or severed nipples or that wild look in Ginsberg's eyes when he called out to her as he was wheeled out of the office on a gurney.

"What are you doing, Stan?" Peggy whispered, afraid to break the spell.

"What are we doing?" Stan said, correcting her in a low drawl that vibrated against her chest.

Betty and Don cheat on Henry and Megan at a campsite for parents’ weekend, in “Love Bug” by Scarlet88

Betty shivered under Don’s touch. “And you still think I’m beautiful, all chewed up?”

Don craned his neck so that he could look into her deep blue eyes. “Yes,” he repeated, his mouth inches away from hers.

Betty could feel his breath hitting her face. She was losing her battle of the wills. Betty closed her eyes, feeling a spark as his lips touched hers in a tentative motion.

He made the first move, and was gauging her reaction.

Peggy chuckled. "So we'll go together like a couple of teenagers?"

Don laughed, "I've never had an actual girlfriend before. This is all new to me too."

"Can we still meet here occasionally?"

"Yes Ma'am. Whatever you want. I love you Peggy."

Peggy chose her next words very carefully and felt a little anxious before she said them out loud.

A warm feeling washed over Don and he pulled her very close and tilted her head so that he could kiss her on the lips. He had almost forgotten that he had told her all about himself when they first got together.

For those who think Joan could handle Roger and Don together, “First We Take Manhattan” by voodoochild

His voice is bedroom-low, and it makes her shiver a little. "You think Don wouldn't appreciate seeing this? Watching you gasp and bite your lip and try not to give it away? Oh, Red, you think I don't know just how many men would give their right arms to fuck you? He's one of them."

The picture is in her mind now. Of course she thinks Don's attractive, she has eyes, but she's never thought about it seriously. But with Roger's voice, she can see it: a late night at the office; Don coming to talk to Roger about something and catching them; Roger showing her off, wanting Don to watch, making him jealous enough to drop his pants and fuck her over the desk.

Her mouth opens in a moan, and Roger pops an olive into it to disguise the sound. She shifts, legs splaying open for him, and he softly groans as his hand meets silk panties.

“Fuck you, Bob Benson. I didn't want this. Do you know what this could mean for me?”

Speechless, Bob can only gape. He brings a hand to lips and imagines that he can still feel the warmth of Pete's own on them. Pete kisses him again before he can collect himself enough to need to reply. His hands become bolder this time, slipping down from jaw to neck to feel his birdlike shoulder blades flex as he pulls Bob closer to his body, kissing him like this is the only chance they'll both have for this. Bob almost thinks that that would be alright. It could be enough.

“You haven’t been acting very concerned for me.”

“How can I, Peggy? I feel like it’s written all over my face – how I feel about you. This isn’t me. I don’t fall in love with women who aren’t my wife. I don’t put women up in hotel rooms. Isn’t it obvious how terrible I would be at sneaking around?”

She smiled despite herself. Peggy felt herself wilting. She drew closer to him without, it seemed, even moving her feet. “I’m going to pay you back for the room,” she said.

Ted didn’t argue. He sat on the foot of the bed, propping his elbows on his knees and burying his head in his hands. “Can we start over?” he asked.

Roger pines for Don in “These Mortals Be” by Cameron-Sholto

I looked up, just once, to see Don slinking away into the night, and even though I had my arms wrapped around everything I told myself I wanted, I’m not sure I’d ever felt quite so alone.

It should be him.

The thought flashed through my mind, and I felt myself color slightly. I really wasn’t drunk enough for this.

"Mad Men" meets "American Horror Story: Coven" in “witches, all of them” by foxbones

Sally kisses him and he tastes like Coca Cola and penny candy, he puts his hands on her waist like he thinks she’ll break and he only opens his mouth wider after a while, after she’s bitten his lips and pulled him closer.

She feels it on her tongue first, the slightest movement. And then he’s sputtering, coughing, choking when his knees hit the ground. The black snake pushes its way between his teeth and slides up his throat, out of his rounded lips where he lays in the dust of the baseball field.

Sally only screams once, and then she knows she shouldn’t scream again.