Mike Huckabee's apocalyptic pledge: Why his presidency would leave America in economic ruin 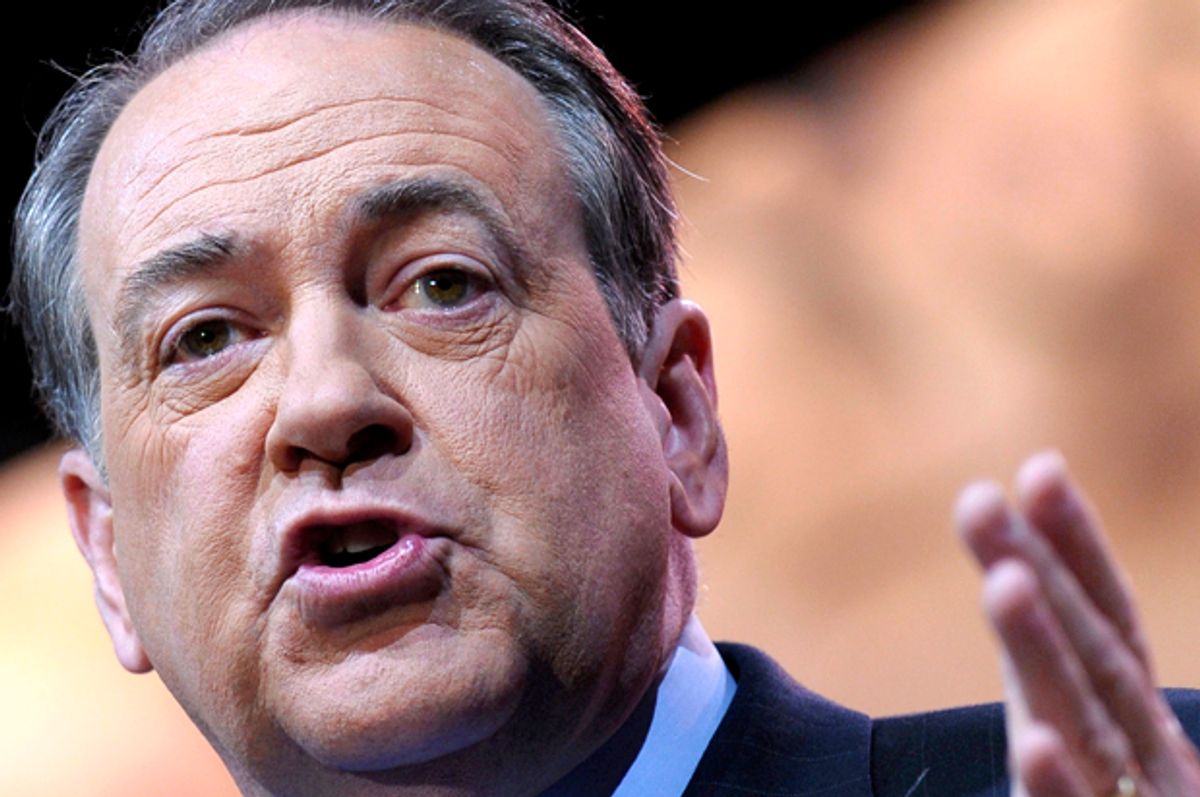 Over the weekend, Republican presidential hopeful Mike Huckabee promised America that as president, he would do everything he could to send the country spiraling into economic ruin. He didn’t phrase it this way, of course, but that’s the only conclusion one can draw from Huckabee’s “Pledge To The People,” a mishmash of rotten policy ideas that speak only to Huckabee’s capacity to pander without the slightest hint of shame.

The logic behind the pledge, Huckabee explained on Fox News, was that he learned during his 2008 presidential run that outside groups constantly pressure candidates to sign their various pledges, so rather than deal with that he devised his own pledge and signed it instead. This gimmicky document isn’t too different from the dodgy, Bible-based cancer cures and other scams Huckabee was pitching before he decided to run for president – they prey on the gullible and Huckabee leans on his folksy charm to mask the fact they they’ll do much more harm than good.

So here’s a sampling of what candidate Huckabee pledges to inflict upon America if elected president: he’ll “oppose and veto any and all efforts to increase taxes,” he’ll impose a Fair Tax and get rid of the IRS, he’ll beef up military spending, he’ll “protect Social Security and Medicare,” and he’ll push for a balanced budget amendment to the Constitution. This is, to put it as politely as possible, insane.

The balanced budget amendment is enjoying something of a renaissance with the current crop of 2016 Republican candidates, many of whom want to make it a constitutional necessity for the government’s books to achieve balance every year. It’s an idea with easy, shallow appeal that would have potentially catastrophic consequences. When the economy goes sour, we rely on the federal government to help cushion the blow through increased spending and economic stimulus. Requiring the feds to balance the books every year would mean drastically reducing the government’s capacity to respond during times of economic distress, and might actually impel Washington to pursue policies that would worsen and prolong recessions.

The Center on Budget and Policy Priorities succinctly explained the danger:

When the economy slows, federal revenues decline or grow more slowly and spending on unemployment insurance and other social programs increases, causing deficits to rise. Rather than allowing the "automatic stabilizers" of lower tax collections and higher unemployment and other benefits to cushion a weak economy, the amendment would force policymakers to cut spending, raise taxes, or both. That would launch a vicious spiral of bad economic and fiscal policy: a weaker economy would lead to higher deficits, which would force policymakers to cut spending or raise taxes more, which would weaken the economy further.

That’s bad enough, but the rest of Huckabee’s pledge would make things even worse. He promised not to raise a single cent in new taxes, which means that the books would have to be balanced every year through spending cuts. But, at the same time, he also promised not to touch Social Security and Medicare spending and he pledged to increase spending on the military. That means he’s ruled out cuts to two of the biggest areas of federal spending while committing more money to the already huge defense budget.

So where will the cuts come from? Well, he’d have to pursue devastating reductions to Medicaid funding, SNAP benefits, housing assistance – basically he’d set fire to the safety net in the name of a balanced budget. All those programs only become more important during economic downturns, and the Huckabee plan is to utterly cripple them at the moment when they’re needed most.

The irony here is that Huckabee devised this pledge to insulate himself from the competing and incompatible demands of various interest groups, but he still managed to create a policy vision that is at war with itself and with basic mathematics. But at least he’s not alone – most of the other 2016 candidates have also promised to cut tax revenues to the bone while pursuing a balanced budget amendment. Almost across the board, they envision policies that would prove to be ruinous once the inevitable recession comes around.