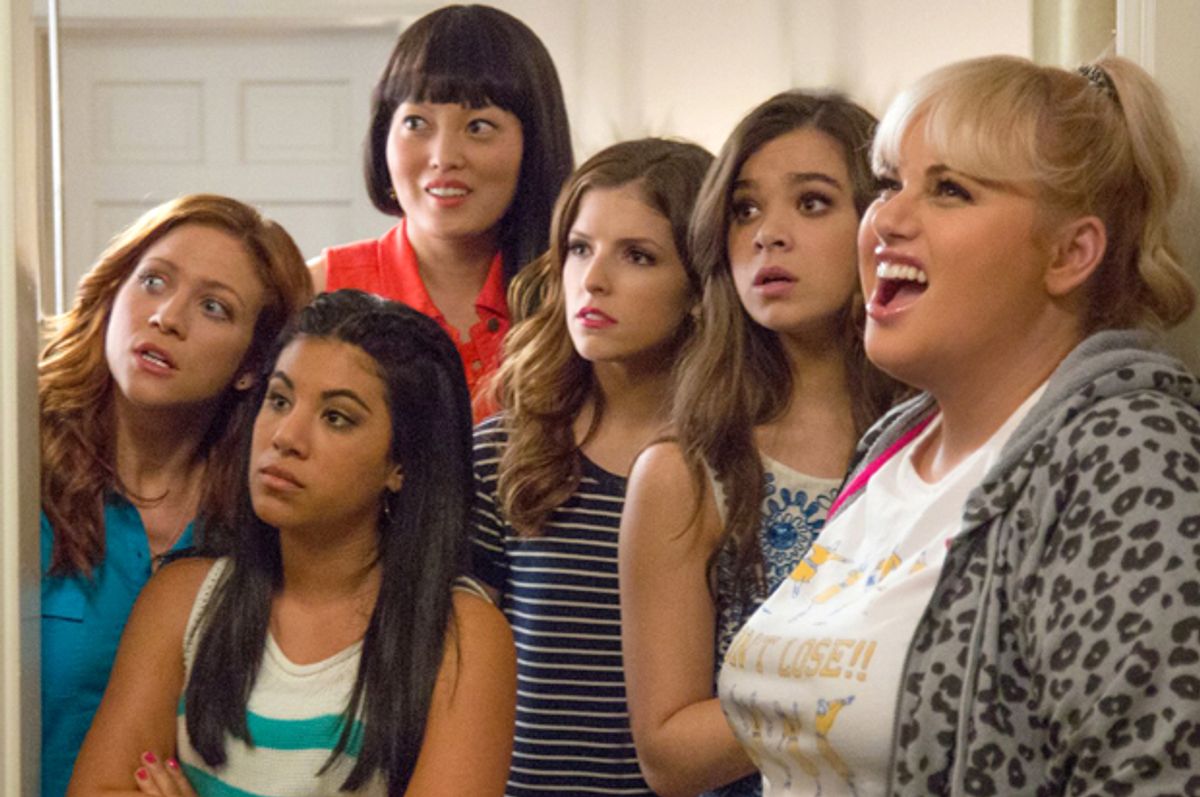 Hello, Hollywood. Hello world. We're women, and we live here and we do stuff like spend money and enjoy entertainment in which we talk about things other than our boyfriends. And although the fact that this still needs to be stated — again and again and again — is frankly a mystery, let's just go ahead and put this past weekend's box office numbers in the evidence file.

In the final weekend before summer blockbuster season official starts, a movie directed by, cowritten by, coproduced by and starring ladies, ladies, ladies (Elizabeth Banks, you are a boss among bosses) managed to earn $70.3 million -- and to leave even "Mad Max" far behind in the dust (which, yes, is also full of women kicking butt!). So how long do we have to keep waiting for the power of women as creators and consumers to actually sink in? On Saturday, at an event cohosted by Variety and the U.N. Women’s HeForShe campaign for the Cannes Film Festival, Oscar nominated actress, director and producer Salma Hayek spoke of the industry's deeply rooted blind side, saying, "They don’t see us as a powerful economic force, which is an incredible ignorance…. The only kind of movie where women make more than men is the porno industry." And Hayek — a beautiful, smart classic leading lady — admitted she's been passed over for roles because, as Variety reports, "A-list actors have approval over her casting, whereas top actresses in Hollywood don’t get similar deals."

Hayek is just the latest in a growing and vocal group of female power players who are speaking up about the entertainment industry's insanely backwards relationship to women. Earlier this year, the Ask Her More campaign lobbied for reporters to do a little better than straight up ogling during red carpet awards season — and, relatedly, the dumb, infantilizing "manicam" nail parade died a rightful death. Last month, the Make It Fair project debuted with a witty PSA on the creeping crisis of "only 93 percent of popular films directed by males," while Meryl Streep launched a screenwriters lab for women writers over 40, and the revelatory, make you want to laugh and cry Tumblr S__t People Say to Women Directors & Other Women in Film took off. In April, Kristen Stewart admitted to Harper’s Bazaar UK, "Hollywood is disgustingly sexist. It’s crazy. It’s so offensive it’s crazy," while Carey Mulligan told Time Out, "In terms of the amount of interesting roles there are for women it’s obviously massively sexist. There’s a lack of material for women. A lack of great stories for women."

It's progress that some companies are starting to realize that women consume their products and are now reconsidering their traditionally sexist ad campaigns. It's encouraging that female-led hits like "Frozen," "Hunger Games" and "Pitch Perfect" are sending a clear signal that appealing to female audiences pays off, hugely. And it sure would be nice if Hollywood began listening to the women who are going public with their stories of the deeply entrenched biases that have kept the industry in such a dumb desert of innovative ideas. But the fact that we are having these conversations at all is still disheartening. That men's rights activists — the saddest demographic of all — are offended that "feminism has infiltrated and co-opted Hollywood" is pathetic. And the notion that women will gladly spend money to see anything but men will run away in droves from a story involving women — because "women" has to mean "Ugggggh is this a chick flick?" — is at this point an embarrassment. Movies are stories about people and women are people too, and lordy, are we tired of saying this. So to the two gentlemen sitting in our row at "Pitch Perfect 2" on Sunday, thank you. You must have received the memo that a uterus is not a requirement to see a comedy starring women! Pass it on! As Hayek noted in her Cannes conversation, women make up half the moviegoing audience. We can vote with our ticket dollars. This weekend, we did just that -- again. "What gives me hope," she says, "is that we are in a position of power."