"We're the people your parents warned you about" 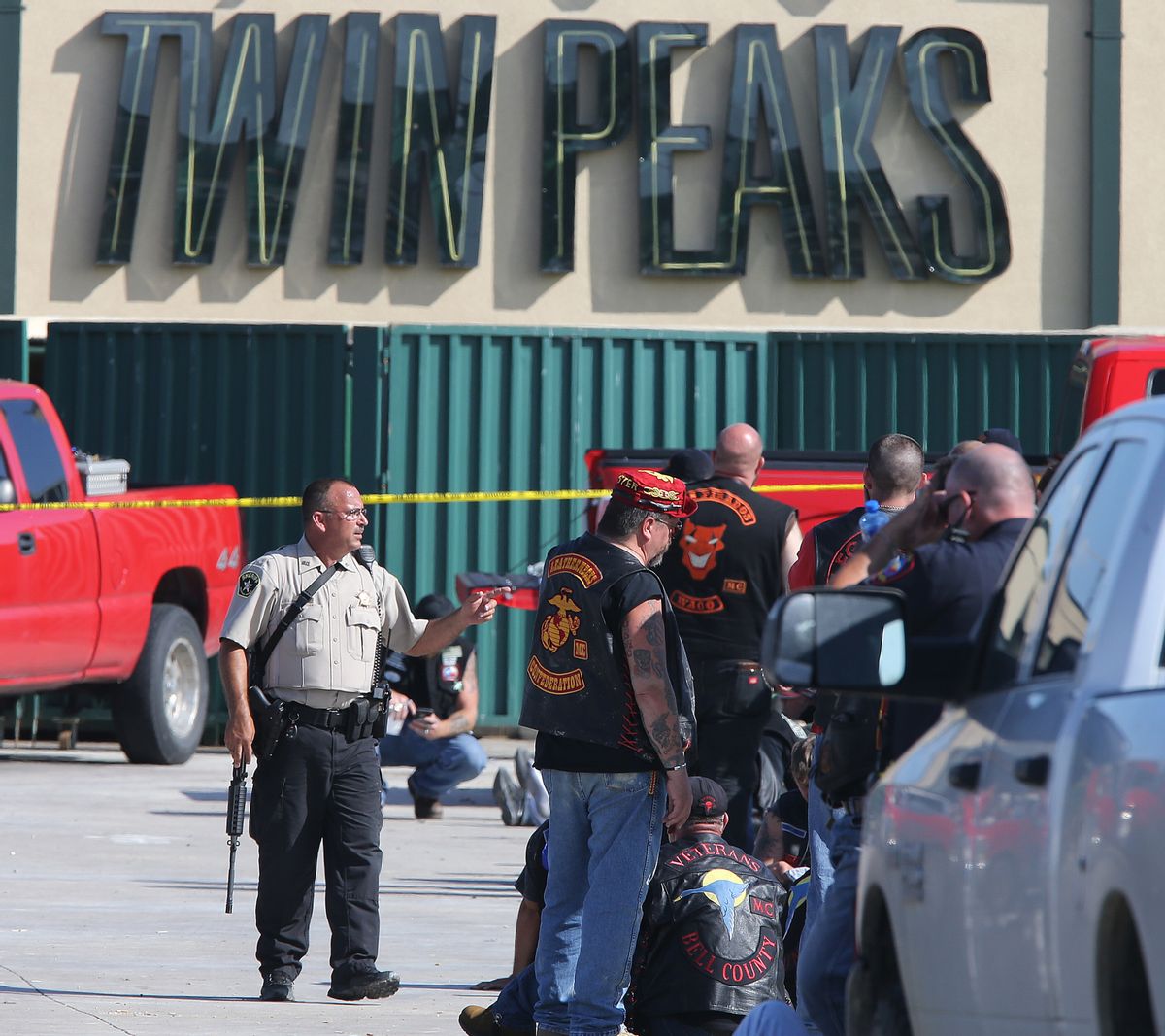 Authorities investigate a shooting in the parking lot of the Twin Peaks restaurant Sunday, May 17, 2015, in Waco, Texas. Authorities say that the shootout victims were members of rival biker gangs that had gathered for a meeting. (AP/Jerry Larson)
--

On Sunday, two rival biker gangs engaged in a shootout in a Texas Twin Peaks restaurant, resulting in nine deaths, 18 hospitalizations and at least 170 arrests. But who were the gangs? Why did they have such little concern about the police who were right outside the restaurant? What caused the fight?

1. The rival gangs are the Bandidos and the Cossacks

Both groups started in Texas -- the Bandidos in '66 and the Cossacks in '69. The Bandidos soon became the state's largest biker gang and it now splits its time between being a hardcore criminal organization involved in the sale of heroin, cocaine and methamphetamine, and working on projects advocating for motorcycle rights. The Bandidos is one of the largest motorcycle gangs in the world with 2,500 members in 14 countries with the motto, "We're the people your parents warned you about."  These groups prefer to be called "clubs" instead of the pejorative "gangs."

"The view of the Bandidos is that Texas is their state," said Terry Katz, vice president of the International Association of Outlaw Motorcycle Gang Investigators in an interview with the New York Times. "They are the big dogs of Texas, and then this other, smaller club -- the Cossacks -- comes along in 1969 or so, and they decide that they are not going to bow down."

2. The Bandidos were at Twin Peaks for a kind of a conference

The group had gathered for a meeting of a branch of the Confederation of Clubs and Independents, an organization devoted to biker's rights. The Bandidos have been holding similar meetings for 18 years and never had such a problem before, according to the group's national ambassador Gimmi Jimmy.

3. The Cossacks and Bandidos have been rivals since 2013

According to the L.A. Times, the two rivalry dates back two years to when the Cossacks club added the word "Texas" to the bottom of its colors, to a place called the "bottom rocker." The Bandidos told them to remove it, and when the Cossacks refused, there was a series of encounters, including fistfights and, that December, a Bandido stabbed two Cossacks in Abilene.

"We've known for several months that there was some trouble brewing with the Cossacks and the Bandidos, sources we had within the Cossacks that have said this is going to erupt if we put this rocker on," said Steve Cook, a police officer with the Midwest Outlaw Motorcycle Investigators Association.

4. The fight started in the bathroom, but it isn't over

The Texas Joint Crime Information Center has issued a one-page report advising that both gangs "reportedly have been instructed to arm themselves with weapons and travel to north Texas." Officers "should be aware of the escalating violence between both groups and are to consider all Bandidos and Cossacks members as armed and dangerous."

5. Twin Peaks is a restaurant chain known for appreciating boobs

The restaurant chain is known for featuring female waitresses wearing almost no clothing (I'm no genius, but the chain's name is probably referring to breasts). The Waco location has been closed down after it refused to cooperate with the police.

"Unfortunately the management team of the franchised restaurant in Waco chose to ignore the warnings and advice from both the police and our company, and did not uphold the high security standards we have in place to ensure everyone is safe at our restaurants," the company wrote on its Facebook page. "We cannot tolerate the actions of this relatively new franchisee and have revoked their franchise agreement effectively immediately."

6. People are rightfully pissed about disparities in reporting on white and black crime

In the aftermath of protests in Ferguson and Baltimore, black political leaders and pundits have been pressured to denounce the violent activities of a few. Network and cable news anchors called protesters "thugs" and referred to civil disobedience as "rioting." None of that happened for the shooting in Waco, Tx.