America's elites are leaving it to die: TPP, Baltimore, Amtrak & the deteriorating fabric of a nation 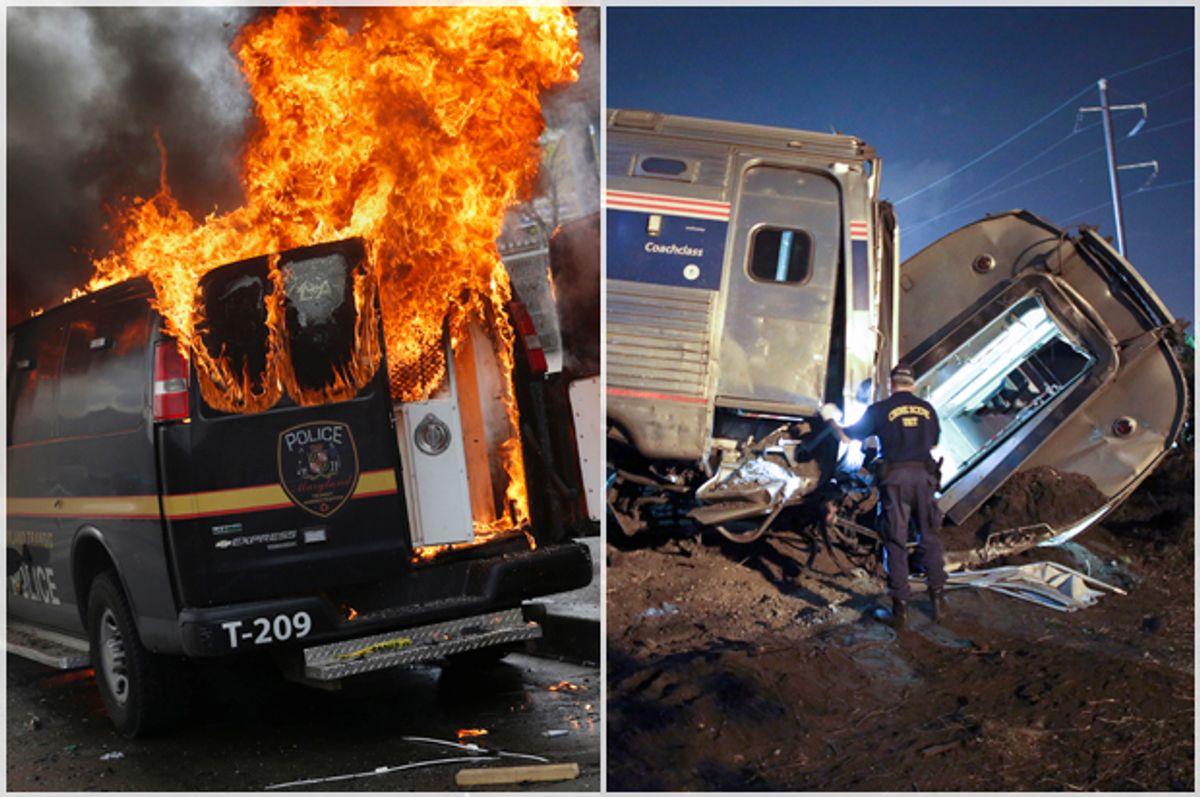 Proponents of the Trans-Pacific Partnership make their case by asserting its adoption will deliver a more broad-based prosperity to America, that the deal will "level the playing field" while sharpening the U.S.’s competitive edge globally.  The magical “how” is being kept under wraps, with congressional briefings on the details of the pact kept classified.

Global free traders like President Barack Obama, and his ad-hoc GOP posse, insist that fast-tracking the TPP pact is just the elixir we need to stimulate the economy, raise U.S. wages and boost lagging household incomes.

If you have lived long enough you have heard this snake oil sales pitch before. TPP’s promised benefits still remain an abstraction rooted in a rosy future because its proponents can’t point to any concrete examples of how such “deals” have actually benefited specific U.S. cities in the past. Trade pacts like the North Atlantic Free Trade Agreement (NAFTA), in 1993, and "most favored nation" status and WTO membership for China, in 2000,  did none of the things for the U.S. worker and economy that free traders promised.

Even as our corporate elites hyped globalization as the only pathway to a prosperous tomorrow, wages for working class Americans were driven down, our manufacturing base disintegrated, and much of our urban core in places like Newark, Detroit, and Baltimore was hollowed out.

A few years after the US urban riots of the late 1960s  the adoption of the Trade Act of 1974 granted the president so-called “fast track”  authority, which limited Congress to only an up or down vote on foreign trade deals with no power to amend them or filibuster their passage.

The latest civil unrest in Baltimore, coming 47 years after its 1968 riots, brought front and center just how  much of America's urban core, once hubs of industrial innovation, have continued to decline as US multinationals abandoned them so they could make more  money investing in foreign countries. At the same time, these global behemoths figured out ways to dramatically cut their taxes by feigning not being  from the United States, while at the same time counting on US military might to keep their transnational marketplace secure. Now, as the bill comes due, they are from nowhere in particular.

You're more likely to have noticed and really cared about what’s been happening in these American cities if you're from one of them and love it like a member of your immediate family. So, it took Baltimore native and Baltimore Orioles VP John P. Angelos  to turn to Twitter to write the most cogent caption for his city,  once again convulsed by civil unrest in the aftermath of Freddie Gray’s death in police custody. His tweeting laid bare how both political parties,  in the service of global capital interests,  consistently betrayed the national interest for their own enrichment. The result: ZIP codes that are economic dead zones where the neighborhoods are made up of African-American and Latino households.

"The past four decade period during which  an American political elite have shipped middle class and working class jobs away from Baltimore and cities and towns around the US to 3rd world dictatorships like China," tweeted Angelos. This, he wrote, sent “tens of millions of good hard working Americans into economic devastation” and “an ever declining standard of living and suffering.”

In the decades since, while the multinational corporations and their congressional vassals  got their way with the passage of trade pacts like NAFTA,  America’s industrial base was dismantled and many of the urban communities that had spawned that base were abandoned. What became of the empty shell just wasn’t their problem.

Between 2001 and 2009 the United States saw the closing down of 42,400 factories, according  to The American Prospect. Thirty-six percent of the plants that shuttered had employed more than 1,000 workers. The ripple effect in those communities was significant, but they lacked the political clout or cash sufficient to buy the attention they needed from our national government.  Often the Democratic Party took this part of its base for granted and ignored the deteriorating social conditions; meanwhile, Republicans increasingly used urban America as a punching bag to consolidate the most reactionary parts of their base.

Plan B for these cities was the creation of  non-unionized service jobs without benefits. As the factories disappeared, in places like upstate New York, the new head of household job became prison guard, as America amped up the war on drugs, and made a growth industry out of  incarcerating the highest percentage of its people of any nation on earth where such statistics can be verified. This also targeted America’s urban communities of color, the Newarks, the Baltimores, the very same ones abandoned by industry.

Back in 2008, Sen. Barack Obama, as a candidate for president, appealing for real Americans who lived in specific places, had to make comments rooted in reality to win voters’ confidence. He had to let them know he grasped just how much damage the  multinational free market hucksters and congressional free traders had done to their communities. Candidate Obama  was quoted in Bloomberg News  while campaigning in Ohio as saying NAFTA had cost 1 million American jobs and led to "entire cities" being “devastated” by the trade pact.

In 2000 globalists like former President Bill Clinton predicted that granting China permanent normal trade relations and entry into the World Trade Organization was a sure-fire winner for American workers and manufacturers.  An enthusiastic President Clinton sounded more like President Obama today about TPP, when at a 2000 March press conference  he described the China pact as “a hundred to nothing deal for America when it comes to the economic consequences.” Only stupid people could think otherwise.

A  decade later, in  2010, the Manufacturing and Technology News described  Clinton’s  quote as “imprudent.” The trade journal reported that the very opposite of what Clinton said would happen is what actually occurred. The impacts were devastating for working-class Americans and its once mighty industrial cities. By 2010 the U.S. trade deficit with China had soared by 173 percent, from $83 billion to $227 billion. At the same time, America lost  5.6 million jobs, more than a third of all of its manufacturing employment, wages declined and  income disparity continued to widen.

The North American Free Trade Agreement delivered similar dismal results. By 2012, almost 20 years after NAFTA had passed, the U.S. had gone from having a $2.5 billon trade surplus with Mexico and a $29 billion deficit with Canada to a combined $181 billion trade deficit with both of our neighbors. (No doubt promoting global free trade has been very profitable for former President Clinton’s post-Oval Office career and his family's foundation.)

By 2014 the U.S.-China trade imbalance had swollen to $342.6 billion. These lopsided trade imbalances have continued as the U.S. has continued to borrow heavily to finance its governmental operations, increasingly putting the fate of our nation in the hands of foreign bondholders. And at the same time, the powers that be have neglected the nation’s urban infrastructure, setting the stage for calamitous events like the fatal train wreck last week in Philadelphia.

Even today, years after the Great Recession, both political parties and President Obama are ignoring the ongoing foreclosure crisis that is still burning through ZIP codes in many of the cities that were already abandoned by industry. In neighborhoods in places like Ferguson and Baltimore, close to half of the mortgages are underwater, meaning that the homeowners owe significantly more on the homes than they are actually worth.

According to a report titled "Underwater America," from the Haas Institute at the University of California, of the 100  cities with the highest rate of underwater mortgages, 71 have a population that is more than 40 percent African-American and Latino. More than 10 million Americans live in the 395 hot-spot ZIP codes where between 43 percent and 76 percent of homeowners are trapped in underwater mortgages and headed for foreclosure.

It is in these places that you find the highest concentration of so-called zombie homes. People have either walked away from them or the banks forced the people who lived in them out. Over time the property deteriorates to the point that addicts and the homeless move in and, on occasion, set the places on fire, killing those living in adjacent homes who were trying to hold on to the integrity of their neighborhood.

Before the poison of our hyper-partisanship, Republican Congress members from farm states would vote with Democrats from big cities to support the food stamp program that helped nourish the nation’s poor, who are often concentrated in America's cities. But now Republicans more often than not see cities as the source of America’s problems, and want to slash whatever they can that supports them because Democrats live in them and they are a draw for immigrant invaders. The combination of a GOP scorched-earth strategy that opposes urban public works, and the push by the tax-dodging globalists to build up every other nation but this one, has locked our nation on a glide path of decline.

In a bygone America, we had a civic pride in our cities and a sense of the value of being from a particular place. We loved our cities. The grandeur of our common spaces, like Union Station in Washington, was a testimony to the respect we had for ourselves as Americans. It was this particularity of place that undergirded our patriotism, making it tangible. When poet Carl Sandberg wrote of his Chicago as a “tool maker, stacker of wheat,” a “stormy, husky, brawling” place, we all felt carried by his “City of Big Shoulders.”

Now we have a big block of our Congress that sees urban America as an unworthy ward of the state whose public services and infrastructure must be downsized and privatized. At the same time, in our era of free global trade imperatives, which now threatens our national sovereignty, there are even Democrats willing to sell out America’s cities at the whim of their multinational paymasters.