How "The Best Show" keeps us calling in for more: "Some people think getting hung up on is an honor" 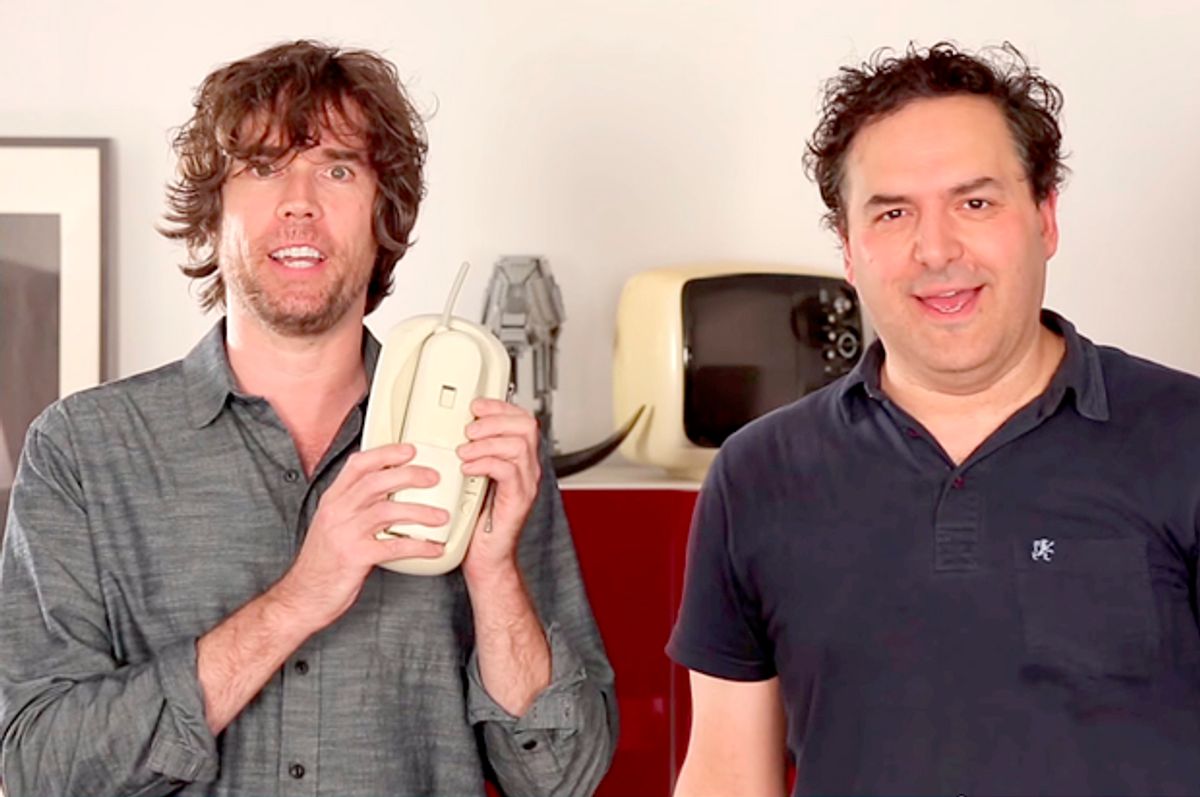 "The Best Show," hosted by Tom Scharpling, comedy writer, television producer,and music-video director, originally came into existence as a call-in radio program on New Jersey's free-form independent station, WFMU, where it ran for over a decade. A typical episode of "The Best Show" — although there are few typical episodes — involves Scharpling playing a few songs, chatting with a guest, making many self-referential jokes, discoursing on pop culture in the chattery way that radio hosts have, and taking calls and then hanging up on those callers mid-sentence.

The show also features an ongoing series of phone calls from the "deranged citizens” of the fictional town of Newbridge, New Jersey, a place that comedian and "Best Show" fan Patton Oswalt describes in the box set's accompanying 108-page book as akin to "The Simpsons'" Springfield or SCTV's Melonville. In one of the show’s many ongoing jokes, the citizens of Newbridge are all played  byJon Wurster, Scharpling’s longtime comedy partner, whose day job is playing drums in both Superchunk and the Mountain Goats. In the calls, Wurster takes on various personas for hilarious, odd and wide-ranging conversations with Scharpling. The chemistry between the two is clear and so is the sense that these friends would probably be having these exact same conversations whether there was an audience or not. While the WFMU version of "The Best Show" ended in 2013, Scharpling and Wurster resurrected the show as a stand-alone podcast and started compiling their phone calls into "The Best of the Best Show," a 16-CD box set, which is out now.

Salon talked to Scharpling and Wurster about inside jokes, the joys of podcasting, and why anyone would do a puppet on the radio.

"The Best Show" has a lot of inside jokes. What’s a good entry point for new fans?

Wurster: The call that we always go back to to show people what we do is the first call we ever did called “Rock, Rot and Rule.” I called in as a kind of misguided rock reference book writer who has written this book about who rocks, who rots and who rules. It’s as dumb as I just explained it. I think that’s the best starting point, but there have been some calls over the years that show where we are now. There’s one where Tom thought he was calling the author of a Bruce Springsteen book and it went horribly awry.

It frequently feels like people call up the show just to annoy you. Do you feel like that’s the case?

Are the listener call-ins surprises for you? Or do you know what’s coming?

Scharpling: I have no idea. Mike is the call screener and he just puts the people on hold and makes sure they have something to talk about. The main thing is people who call up and say,"‘Hey, what’s going on? I’m just checking in. I have nothing to say." They’re charming, but not boring. Outside of that I have no idea where things are going most of the time. That’s the adventure of it. Sometimes people think about calling for weeks and finally get through and get to say their thing and it’s not where the show is at. They’ll want to talk about something we talked about a month ago! We just can’t do that.

Do you ever feel bad about disappointing fans like that?

Scharpling: It’s weird. I try not to be hurtful to anybody, but it’s a comedy show. The goal is to make the best version of the show, not make sure everybody has the most satisfying phone call experience. People know that when they call. The show doesn’t exist for phone calls, it exists for listening. I think people know they are adding to the fabric of the show, whatever that is. Some people think getting hung up on is an honor. I don’t know if I would go that far, but I’m glad people are OK with it.

And Jon, for your calls, are they planned together in advance?

Wurster: They are very planned out. They are about 90 percent scripted, but there is room for improv, too. We’re always going off on little side roads with the calls. We do like to surprise each other with little things, so there’s a lot of that too.

Scharpling: There are places we want to go with the characters, so there really is a back and forth, because we know we have to get to a certain point so the character can turn. It’s a lot more controlled than it might seem.

How has the show changed over the years?

Wurster: My memory is that early on there was a lot more music.

Scharpling: Yeah, the earliest version of the show had a lot more music. Then we would do calls and I would take phone calls, but the show kept growing and growing. Now I think when the show is at its best, it kind of can go where it goes. The stuff that Jon and I do is very planned and prepared, and that’s one type of comedy. The listener calls are completely spontaneous, so that’s another type of comedy. Then I’ll talk and tell stories and that’s another type. A lot of ground gets covered over the course of the three hours.

What can you do as a podcast that you couldn’t do on the radio?

Scharpling: Language restrictions would be one thing, but it’s not like we were dying to be able to curse. Being on the radio has FCC restrictions, so we didn’t, but it forces you to be creative and come up with different ways to get across your idea. That ended up becoming a lot more fun, coming up with ways to say things that are broadcast friendly, but are still what we wanted to say.

Wurster: I don’t think anything that Tom and I do has changed at all. We can be profane on this new version of it, but we think it’s funnier to come up with different ways to say things. We write the same way and we perform the same way as we did on WFMU.

If you can do all the same things, why did you switch to podcasting?

Scharpling: It’s more of a life thing. WFMU is a non-commercial station and there was no chance of making any money doing the show. That’s not a complaint, it’s just the way WFMU is set up. In the course of doing this show for 13 years, it kept growing and growing and it took a lot of time to do it right. Jon and I were doing so much writing that it pretty much felt like a full-time job. We had reached a crossroads where it was hard to keep doing a thing at this level without any opportunity to make some kind of living off of it. We had to figure out a new way to do it, or we might have had to stop doing it altogether. A half-ass version would never be an option.

Speaking of this being almost a full-time job, how do you fit this in with all your other responsibilities?

Wurster: I don’t have a personal life at all. That’s how it fits in. More often than not I am doing these calls from a rock club parking lot or a back alley somewhere. Every day that I’m on the road gives me something for a call, without fail. I’m always seeing weird things, weird incidents, misreading signs triggering things. Almost everything in my life is fodder for a call.

What’s the deal with Gary the Squirrel?

Scharpling: Gary the Squirrel was the second puppet added to the show and it just became this really stupid thing that I really enjoyed doing. It’s hard to explain because the idea of doing a puppet on the radio is so stupid on such a core level. It’s almost like I have to let it be what it is and not think about how stupid it is or I would never be able to do it again. I would just be wracked with embarrassment.

What is your favorite call?

Scharpling: The call that just makes me laugh when I think back on it is this call called “Big Bill/Little Bill,” where Jon was doing a father and son who both had the same voice. Jon was just doing his normal voice, but it was supposed to be this 10-year old kid and his father and they both had the exact same speaking voice and they were both on the line at the same time talking to me. Then suddenly their dog Mr. Sherbert came on and was talking too and he had the same voice. I was having a conversation with three people and I couldn’t tell any of them apart. It was just crazy and of-the-moment for me that it just made me laugh. It made me laugh all over again when we put it on the box set.

Wurster: There’s one that we did on the last CD we put out, "The Art of the Slap," that was kind of the first epic call that we did. It was a two-parter about a band called Mother 13. Just kind of a generic alternative rock band and they want to be the first rock band to play on the top of Mount Everest. The first part of the call is about the plan and how great it’s going to be. The whole time Tom is just saying, you’re never going to be able to do this, and the guy has just such misguided confidence and hubris. The follow-up call is the tragic aftermath of the attempt to play Mount Everest. It just had so many outrageous moments.

After all these years, is it still fun?

Wurster: I think it’s more fun now somehow. I think knowing that there is a big audience who likes it really helps. Before podcasts and instant feedback, we were just doing this for each other, for our own amusement. There wasn’t much feedback other than listeners stopping me on the street. It’s exciting to see people react to what we do.

Scharpling: It feels like we can find new places to go with stuff. It’s exciting to be this deep into it and realize that we’re not running out of ideas. It doesn’t feel like we are treading water. We’re in a really good place where it feels like it’s growing, not diminishing. It’s still funny and we’re still making each other laugh. That’s a great place to be with it this far in.