Modern science fiction and comic books are "childish"? They're not -- and it's time for this debate to end 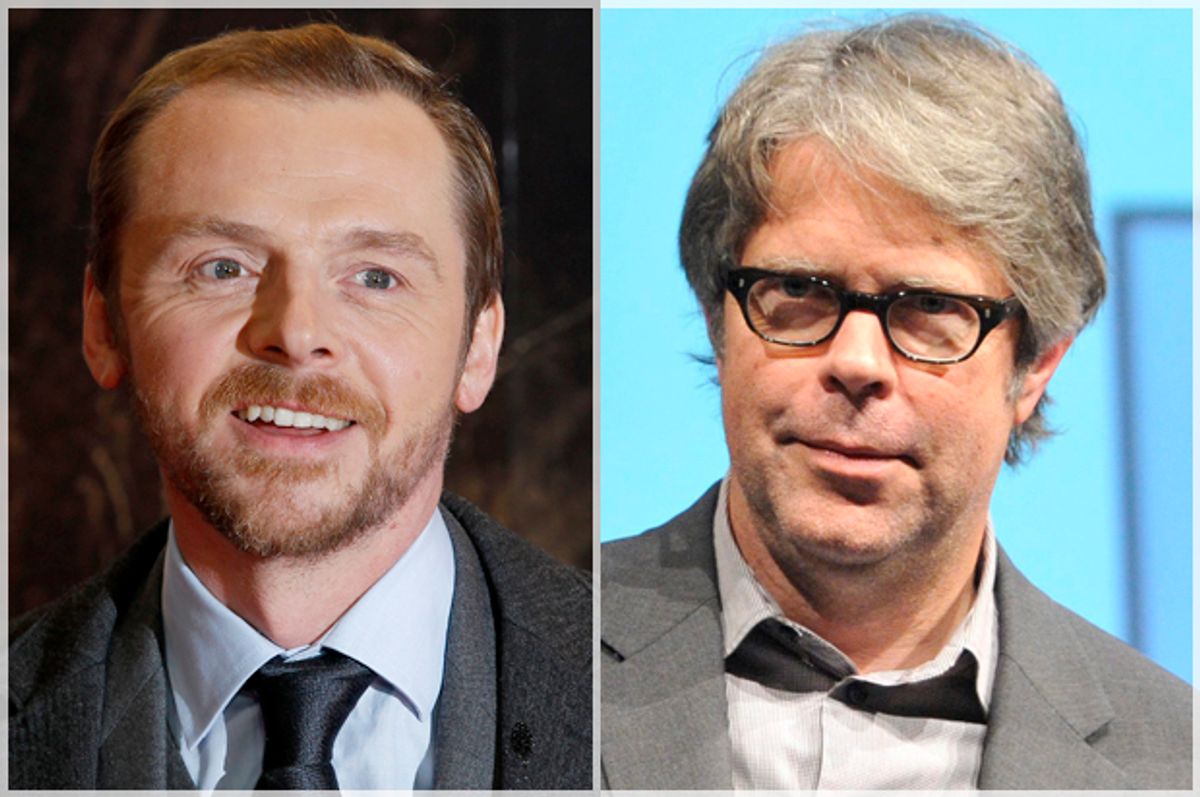 Actor Simon Pegg may have thought he was making an original statement when he lamented to Radio Times that modern science fiction and comic books are “childish” and that we’re all on the way to becoming so infantilized and dumbed down we can’t think about anything serious, as reported by i09, but his statements are just the latest variation of cultural snobbery masquerading as concern for the impending downfall of society. (For a primer, see BookRiot’s translations of “Shit Book Snobs Say”).

i09 does a great job of defending the nuances of comics and science fiction, but this issue crops up every few months and isn’t specific to those fields. I don’t need to know much about superheroes to relate, because I do read two genres that are often seen as just as deplorable, ruinous and facile: romance and young adult. In the wake of the success of "Fifty Shades of Grey," it’s become almost obligatory for any respectable publication to offer simultaneous awe at its commercial success while finding even faint praise too kind.

Pegg’s comments arrive just a few months after author Jonathan Franzen told literary journal Booth, “Most of what people read, if you go to the bookshelf in the airport convenience store and look at what’s there, even if it doesn’t have a YA on the spine, is YA in its moral simplicity. People don’t want moral complexity. Moral complexity is a luxury.” The truth is, there’s nothing more childish or morally simplistic than trying to tell other people what forms of pop culture they should be consuming, as if their appreciation of entertainment should be predicated on someone else’s taste—because that sounds like the height of adulthood, doesn’t it?

Yet apparently it makes Pegg and Franzen feel better about themselves to look down upon the masses reading their preferred books or movies or TV shows, ones that may or may not make us think about, as Pegg put it, “real-world issues.” It’s elitism plain and simple, dressed up to seem like it’s furthering a greater cause. Whatever the supposed motivation, there’s no disguising that their essential argument boils down to: I don’t like what other people are reading or watching; my choices are better, not just for me, but for everyone else.

Thankfully, there’s been a backlash against this kind of hysterical hierarchy as readers and fans of all sorts of genres are banding together and proudly declaring their interests, regardless of what the naysayers think. During the recent #IReadYA hashtag on Twitter, YA author Maureen Johnson tweeted, “#IreadYA also because annoying literary snobs is a lot of fun, and that kind of fun should not be underrated.”

Former literary snobs are seeing the error of their ways (take note, Pegg and Franzen). Professor James W. Hall, author of "Hit Lit: Cracking the Code of the Twentieth Century’s Biggest Bestsellers," explored how he learned to love bestsellers by teaching them in the classroom.

“I was so dedicated to spreading the gospel of high road literary values that, on a whim, in 1984 I designed a course featuring the most popular American bestsellers of all time, with the sole intention of showing their inferiority to the literary canon.  A semester of snark is what I had in mind… As you might guess, that’s not exactly how it panned out. Instead, I was gobsmacked by the likes of Scarlett O’Hara and Allison McKenzie (the protagonist of ‘Peyton Place.’) I was awed by what these, and other popular novels had to offer, their sweeping panoramas, their density of factual information, their emotional intensity and raw power…In that semester the passion for reading I’d once had as a kid and lost in the years of academic study was rekindled, and suddenly I began to question many of my long-held assumptions about ‘literature.’”

At Bookish, Natalie Zutter confessed, “Before I started writing full-time about books, I carried a pretty stereotypical disdain for romance. When all I knew were the cheesy Fabio covers and kooky plots, I couldn’t imagine these novels being anything more than the literary equivalent of junk food.” She soon came to find a genre rich with variety and female empowerment. That’s not to say you or Pegg or anyone else should read romance or sci fi or anything you don’t want to (unless you’re in school and it’s part of the curriculum).

The book snobs aren’t without plenty of storied company. In a 1904 letter to Oskar Pollak, Kafka wrote, “Altogether, I think we ought to read only books that bite and sting us. If the book we are reading doesn’t shake us awake like a blow to the skull, why bother reading it in the first place? So that it can make us happy, as you put it? Good God, we’d be just as happy if we had no books at all; books that make us happy we could, in a pinch, also write ourselves.” With all due respect to Kafka’s literary prowess, I must strenuously disagree. Life is challenging enough; after hearing news about, say, the Amtrak train crash, I don’t necessarily want “bite” or “sting,” but rather, pleasure and escapism.

But I’m tired of cultural pompousness passing as a form of intelligence and moral superiority, whether we’re talking about television, book, movie or music preferences. I record "Keeping Up with the Kardashians" while my boyfriend records "Nova"—does that make him a better person? Is that really what we want to pass down to the next generation—a way of one-upping ourselves over something that should be entertaining?

I’m in the middle of packing to move and paring down my book collection from around 35 boxes to 10. Needless to say, some of the choices have been harrowing, but the process has also been enlightening. I have everything from a memoir by Sarah Weddington, the lawyer who argued Roe vs. Wade; to the novel "Naked" by Betsy Franco (James’s mom); to a novel “by” a fictional character (Thelma Harper of "Mama’s Family" fame). And you know what? I value them equally. Sure, some books may make me think harder than others; some I may pause and reread and savor sentences simply because of how they’re constructed, while others I race through to see whodunit, but so what? I don’t want to live in a world where I have to pass some test of approval by cultural gatekeepers before I flip open a book or set foot in a movie theater.

Everyone is entitled to read, watch and listen to whatever they want. Personally, I’d rather see people reading something than reading nothing. Furthermore, Pegg and co., if you’re so concerned with society being dumbed down, why not try to tackle the problem of illiteracy or education or library funding? Better yet, build an entire library full of all the books you think people should be reading. You can even put your name on it.