The 6 best sex scenes from "Bachelorette" host Chris Harrison's romance novel: "His body and hers curled around the epicenter of pleasure" 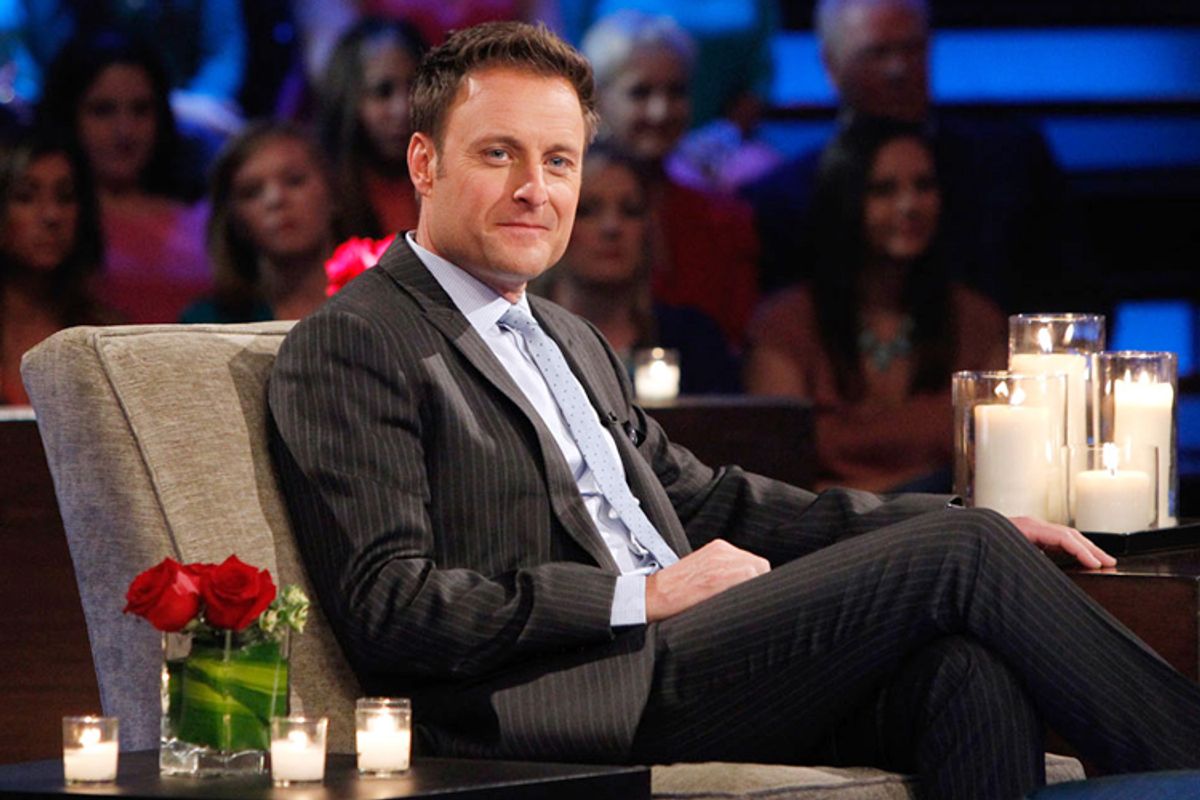 Have you ever wondered what it would be like to read erotica penned by “Bachelor / Bachelorette” host Chris Harrison? This is a man who has personally invited dozens of men and women into the "Fantasy Suite" (to sleep with each other, sure, but he writes the date cards) so clearly he must have a pretty good idea about what goes on what happens when two people come together to consummate their love when the time feels right.

Here, our heroine and her long-lost ex-con lover reunite, but they decide to take things slow:

“Between them, the growing weight of ten years of lust and longing, the swell of want. Leigh reached down and touched him through the fabric of his jeans, and felt him recoil. “Don’t,” he said, his voice low and ragged. “Let me take it slow, or this will be over in under a minute. I’ve waited ten years to touch you again, and I have no intention of rushing things.”

“She raised her hips higher to admit him, and grabbed his buttocks and pulled him into her, deep, deeper. She pulled him in until she thought her ribs would crack and her body would collapse with wanting. At last they both cried out and shattered against each other, first Jake, then Leigh a second later."

It's vaguely disturbing to think about Harrison writing this scene where a teenage Leigh loses her virginity to Jake in a barn, but hey, whatever serves the narrative:

“A quick burst of pain and then it was done, more smoothly than she had imagined. He moved over her, hips pushing into her softness, into the ache, her body so lit with desire she no longer had any sense of where she stopped and he began. She grabbed him and pulled him into her, deeper, nothing but his body and hers curled around the epicenter of pleasure.”

Different settings and environments are no obstacle to Harrison's lyrical way with words, such as this scene, which takes place in the shower. I also love how Harrison envisions the female orgasm here: A gentle pop! How quaint:

"Jake turned to kiss her, body slick with water and soap, his hands and mouth gliding over the silkiness of her breasts, between her legs. There was no friction, but only the pressure of desire. Leigh closed her legs and felt the water spraying them both, a wetness on top of wetness, Jake's tongue flicking over the center of desire gently at first, then more and more insistent, until she felt a gentle pop and the world was warm around her."

Later, Leigh and Jake have a romantic tryst near a hotel ice-machine. The old ice-cube trick! Chris, have you been reading Cosmopolitan lately?

“With one hand he opened the lid of the ice machine and took a piece of ice. With the other he slid the strap of her nightgown off her shoulder, revealing her breast. He touched the ice to her nipple, and she shivered. She couldn’t move. She was pinned there by his body, his hands, his own pulsing desire.”

Harrison seems a bit spent by the time we reach the final scene, but hey, there's only so many ways you can say orgasm before you start to run out of synonyms:

“She felt her own power surge over him, his breath fast and hot on her neck, on her breasts, as he lay helpless beneath her, pressing his hips upward into hers. She would never stop wanting him, never — and at last he cried out and she took her last stroke of pleasure only moments before he, too, exploded into her.”

Want more where this came from? Buy the book!