An anti-LGBT pastor's Grindr outing: The church's hypocrisy and denial are the real sins 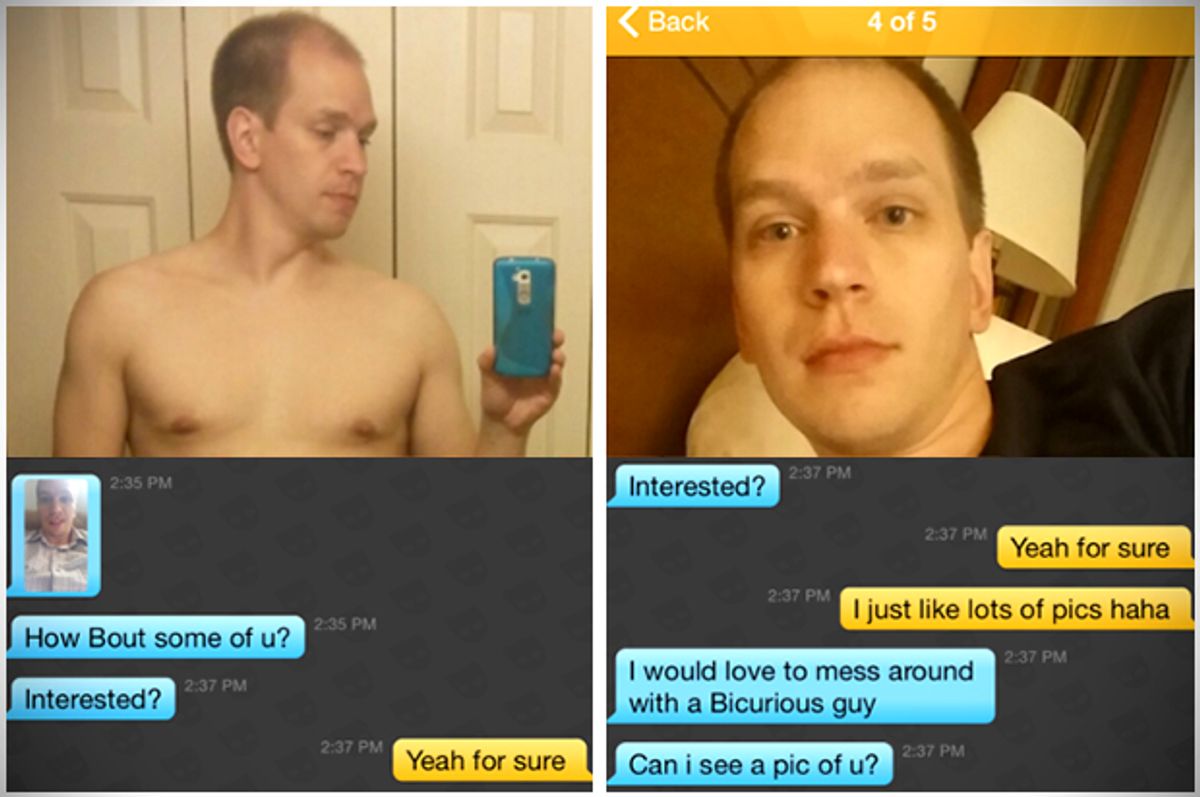 Well, well, well, what a surprise. Here's the setup: Meet Reverend Matthew Makela of St. John’s Lutheran Church and School. Until very recently, he was an associate pastor whose church bio described him as a man "blessed" with a wife and five children, one whose interests include "family, music, home improvement, gardening and landscaping, and sports." And, as Queerty reveals this week, he's also enjoyed taking a clear anti-gay stance, writing in a now-deleted November letter to the Midland Daily News that "We don’t tell a person born with tendencies to abuse alcohol to keep on giving in to his innate desires because he can't help it. We try to help him in his struggle." He's also spoken out on Facebook about how "The transgender movement is going to assist opportunistic sickos in preying upon children and others." So anyway, guess who's turned up on Grindr?

In screenshots obtained by Queerty and confirmed by Makela, the reverend is seen shirtless in a Grindr exchange, saying that "I love making out naked, oral and massage. And I top. Also love to cuddle." He now tells Queerty he has recently "resigned" from his position but declines to comment further. As Queerty points out, what people do in private is their own business. But if you're publicly promoting the idea that gay people are like alcoholics and that trans people are in line with "sickos" while you're trawling for dates on Grindr, this is not quite in line with what you're preaching about "taking the marriage union with the utmost seriousness." And it's genuinely sad and painful to imagine what this man and his family must be going through now because of the conflict between what he desired in private and what he promoted in public. This is what shame and secrecy — so often brought about by some spectacularly warped ideas about God's will — do to people. Imagine how much turmoil could have been avoided by just being honest. Imagine, beyond the profoundly harmful hypocrisy here, the torment of a man who among other things wanted someone to cuddle. That's goddamn heartbreaking.

And that's why this story is not just about Makela's double life. In an open letter on the St. John’s site, Senior Pastor Reverend Daniel Kempin has announced, "It is my grief to inform you that Pastor Makela announced his resignation as a pastor of St. John’s through a letter that was read in worship on Sunday, May 17.… The details of sin that have been kept confidential are being posted online by those who seek to do harm to the Makela family and to St. John’s. This is taking an already difficult situation and making it even more painful.… The Facebook pages associated with St. John’s have been taken down in an attempt to remove the opportunity for malicious posters to have access to St. John’s members.… I write this to you to warn you that you may be confronted with the details of the sin, and to remind you that sin is never pretty. Don’t panic.… Don’t respond.… Be patient and trust God. This too shall pass."

The viciousness of Internet mob justice is real and very scary, and unfortunately the trolls will take any opportunity that presents itself to be threatening and abusive. I wouldn't blame the St. John's community in the least for not wanting to expose itself to drive-by attacks by Facebook cretins. And there's a measure of compassion to be found in the church's choice to not embarrass Makela in a public condemnation. But for St. John's to so actively discourage its congregants from knowing what went down sure seems to indicate a certain "Please just slink off and let's everybody just forget this ever happened" attitude. That's unhelpful and profoundly unrealistic. If you want to talk about what's "never pretty," start with the death-threats-as-default reaction that a certain segment of the social media population seem to employ with stunning regularity. Then move on to the common conservative resistance to the stubborn reality that the world is not made entirely of man-lady, child-bringing-forth relationships. And while denial may not be a sin, how much more proof do we need that it sure as hell is corrosive?