China's impact looms large as US debates its own trade deals 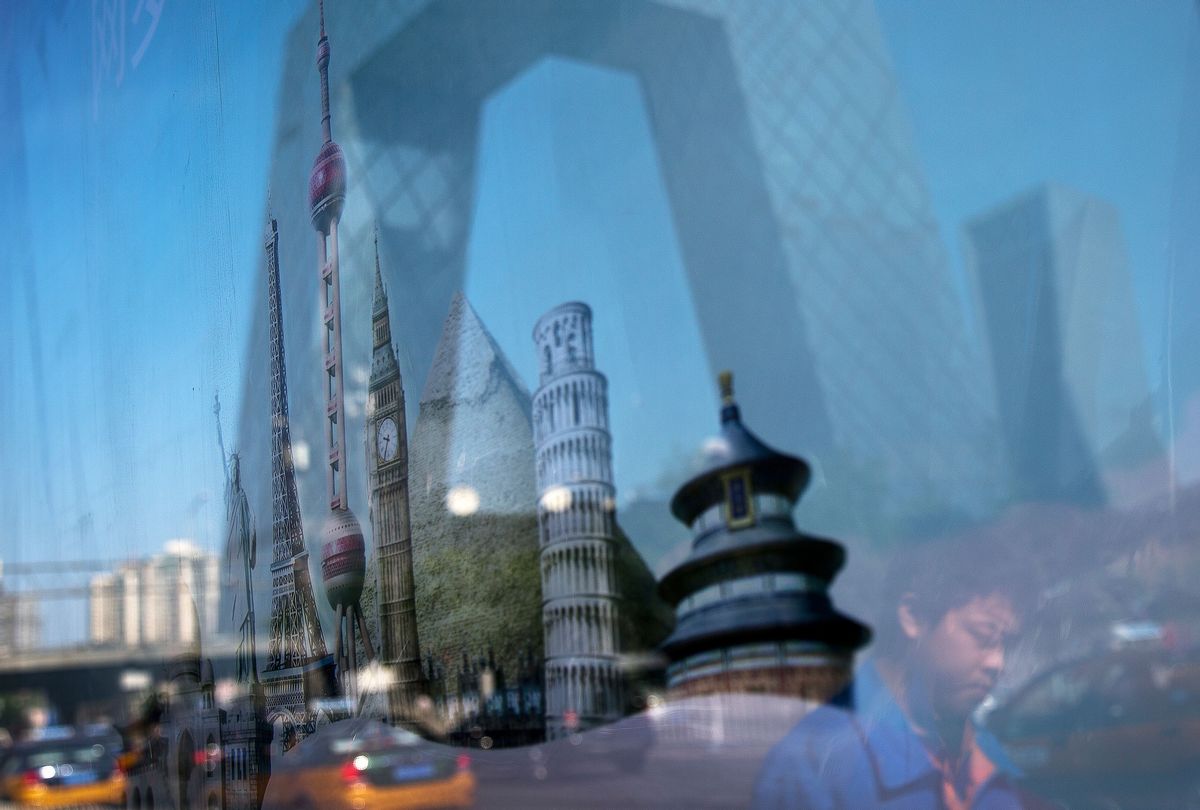 A man and the building of China Central Television (CCTV) headquarters is reflected on an advertisement billboard shows various countries' scenic places on display at the Central Business District of Beijing, China Wednesday, May 20, 2015. If the U.S. doesn't write the rules of international trade, President Barack Obama warns, China will. In fact, China is already helping write those rules, and in some ways has jumped ahead of the game. (AP Photo/Andy Wong) (Andy Wong)
--

WASHINGTON (AP) — If the U.S. doesn't write the rules of international trade, President Barack Obama warns, China will. In fact, China is already helping write those rules, and in some ways has jumped ahead of the game.

There's intense competition between the U.S. and China for economic influence in the world. As Obama seeks to persuade lawmakers to back his trade agenda, he has cast that competition as an economic threat.

"They'll write those rules in a way that gives Chinese workers and Chinese businesses the upper hand, and locks American-made goods out," the president said in Oregon this month.

As a result, China's impact, both current and potential, is partly shaping the U.S. debate over whether Congress should grant Obama greater trade-negotiation authority. Under such authority, lawmakers could still set parameters for trade deals, but once an agreement was negotiated they could only approve or reject it, not change it.

Obama is seeking the "fast-track" authority to complete a Trans-Pacific trade deal with 11 other countries along the Pacific rim, many of whom are also negotiating separate trade pacts with China.

There is significant overlap. Countries involved in both negotiations include Brunei, Malaysia, Singapore, Vietnam, Australia, New Zealand and Japan.

China, under President Xi Jinping, is also starting an Asian Infrastructure Investment Bank and has enlisted 57 countries to sign up. Such a venture is designed to broaden China's practice of using its state-owned companies and its workers on foreign capital projects.

The U.S. and Japan, leading shareholders of the World Bank and Asian Development Bank, have expressed concern over the new bank's governance standards and the types of projects it might finance. "They may be very good for the leaders of some countries and contractors but may not be good for the actual people who live there," Obama said last month.

Still, Britain, France and Germany have broken with Washington and are seeking membership.

As a result, the Trans-Pacific trade deal Obama seeks would do less to thwart China than to help the U.S. "rebalance" toward Asia and gain a foothold in a major world market.

"The U.S. has to be in the game itself," Evan A. Feigenbaum, a former deputy assistant secretary of state for South Asia, said at a recent conference on U.S.-China economic relations. "In the full sweep and scope of Asia institutions, agreements, functional areas, clearly the United States, if it's going to adapt and compete, has to compete with something."

HOW TOUGH ON LABOR RIGHTS?

When Obama says the U.S. needs to "write the rules for trade" he is addressing a difference between the trade deals that China is negotiating and those that the U.S. is hoping to complete. The Regional Comprehensive Economic Partnership is much like a traditional free trade agreement that simply seeks to lower tariffs and increase access to markets.

The Trans-Pacific agreement, however, also aims to set labor and environmental standards for its participants. Presumably, that would enhance U.S. competitiveness in its exports.

The debate in the United States centers on how enforceable those standards would be. The North American Free Trade Agreement negotiated by President Bill Clinton had side agreements on labor and the environment that were not enforceable. More recent deals, many with Latin American countries, have built enforcement into the agreements.

Results have been mixed.

A Government Accountability Office report last year found that while some countries have taken steps to strengthen labor rights, enforcement has been limited and U.S. agencies have been inconsistent in monitoring. It found that of five labor complaints submitted to the Department of Labor since 2008, only one had been closed.

"The history of these agreements betrays a harsh truth: that the actual enforcement of labor provisions of past U.S. FTAs lags far behind the promises," concluded a report this week by Sen. Elizabeth Warren, D-Mass., a vocal critic of Obama's trade efforts.

Administration officials concede past problems in addressing claims. They say some delays are due to a lack of resources and others are the result of labor standards that are unclear or too weak to make a strong case. They say the Trans-Pacific deal would reflect those lessons.

U.S. administrations have long complained that China subsidizes its exports by keeping its currency values artificially low. And while China is not a participant in the Trans-Pacific agreement, critics and even some supporters of the deal believe it should include measures that would crack down on nations that manipulate currency.

"Past administrations have had a number of tools at their disposal, but they've sat in a drawer gathering dust," Sen. Chuck Schumer, the New York Democrat who succeeded in placing currency valuation restrictions in related trade legislation, said last week.

But administration officials say any provision that would punish countries deemed to be purposefully undervaluing their currency to gain a trade advantage would prompt retaliation and lead to a trade war. The administration on Tuesday said that if the currency manipulation restrictions are placed directly in the "fast track" legislation, Obama will veto it.

"There was a time when China was pretty egregious about this," Obama said during a trade pitch at Nike headquarters in Oregon last month. "And we pushed back hard, and China moved. ... That's not an argument against this trade agreement."

He said in an email: "One reason for our persistent trade deficits is that some of our trading partners have managed their currency to subsidize their exports to us and tax ours to them."