Mills tells Salon about playing "So. Central Rain" on Letterman in '83, tweeting the news Dave was leaving and more 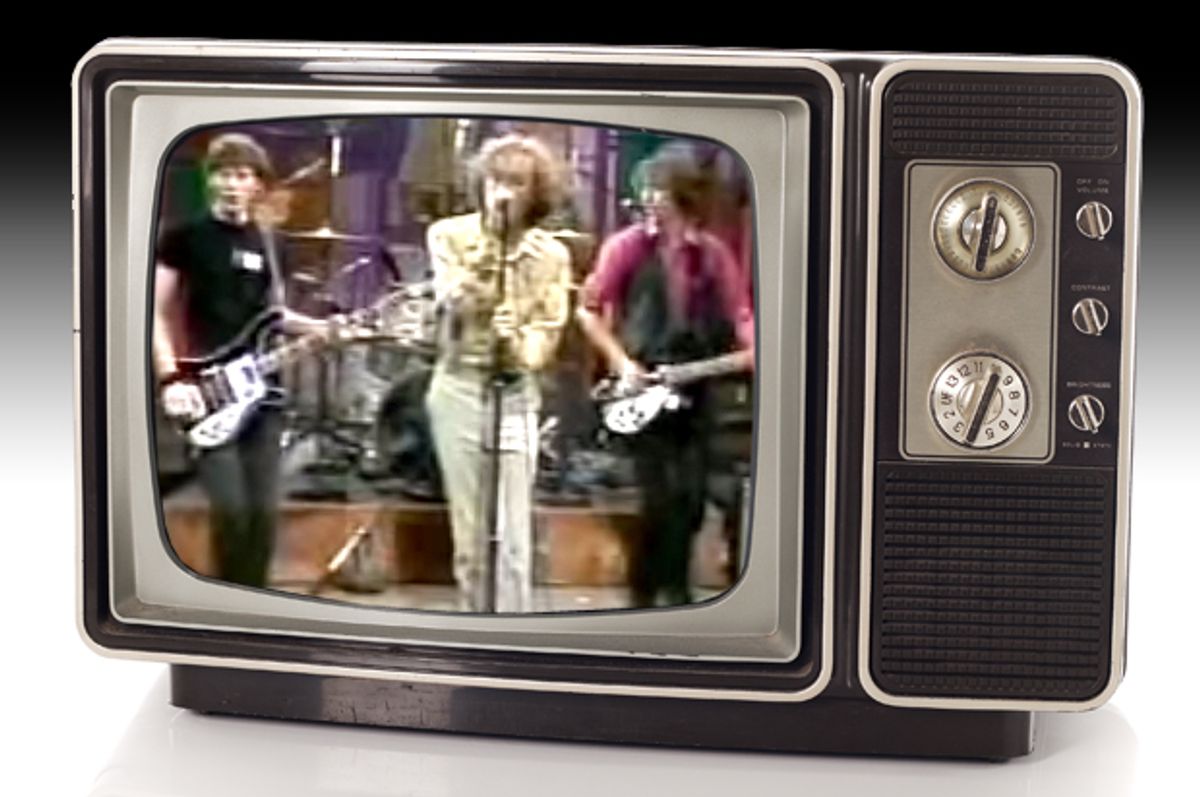 David Letterman's departure has spawned a million top-10 lists, but there's one thing everyone can agree on: One of the very best musical highlights was the first national TV appearance by R.E.M., back on Oct. 6, 1983.

R.E.M. played two songs -- "Radio Free Europe" and a still untitled song that would later become "So. Central Rain" -- and spent a couple minutes chatting with Letterman, who excitedly left his desk to talk with Mike Mills and Peter Buck.

Letterman would spend 33 years redefining late night. R.E.M. would spend 31 years reshaping American rock. The influence of both will resonate for years.

Mike Mills had a fascinating view on it all -- he not only talked to Letterman that first night, but he was playing on the show with Joseph Arthur on the evening when Letterman announced his retirement. Mills broke the news to the world on Twitter. We'd call that a perfect circle. (Sorry.)

Salon wanted to hear Mills' perspective on Letterman's last week, his stories from those many appearances over the years, and any advice he might have for someone walking away after three decades of success. We talked last week by phone, while Mills was traveling between appearances with The Baseball Project.

Your first appearance on the David Letterman show was also your first national television appearance. This was not too long after "Murmur." Did it feel like a really big deal at the time? A 12:30 talk show, the band usually isn't on until 1:20 at the earliest. But did getting this appearance feel like a confirmation that things were happening?

I was always a big fan of Dave's so we were really happy to be on his show. You knew that your friends all watched that show. We didn't know who else did, but we knew our friends did, so it was very exciting. Things were starting to happen for us and that felt like a big boost of momentum.

Do you know how it came about? There were only two shows at the time. In some ways, it's less shocking now when your favorite new band plays on late night. There are 12 shows.

But back then, it was really just Letterman, in that you'd never see a band on IRS play Johnny Carson.

Dave was always a big music fan and his staff always kept their eyes open for hot bands they could put on.

They do look pretty smart for making the booking.

They got a kick out of being first. They liked to find it before anybody else did -- even though at the time there was no late-night competition. It was still a coup for them to get hot young bands on there first.

Have you watched it lately? Some of the footage is in the R.E.M. documentary so you probably saw some of it there.

Not really, other than watching the documentary, which was fun and bittersweet. Dave's a big part of that.

You got two songs -- and even on late night in 1983, that seems special. But he also came over and did an interview in between songs with you and Peter. It's almost impossible to think of other bands, especially new bands, getting such a fun chunk of time.

That's true, he came out and chatted. Everybody thought Michael didn't want to talk, but it was only because it was originally planned that Peter and I were going to go sit by him. Then Dave didn't do that. He walked over to us, and Michael had already sat down by the time Dave walked over. Peter and I were standing there.

Michael has talked about that moment, and he thinks that's the exact time he got branded as enigmatic, and it followed him forever.

(laughs) Maybe. I can see that. But there was nothing mysterious about it. He wasn't expected to sit next to Dave, so he just sat down.

It's a very charming interview...

All I remember is him talking about the song. Dave wanted to know what the name was.

And there was none. Enigmatic!

I don't think we had a name for the song yet so he was like, "Too new to be named." And we actually talked a little about why CDs cost more than LPs. Or why LPs cost so much? I can't remember exactly what.

You made a Herschel Walker joke.

Dave asked about other interesting things coming out of Athens. Peter, ever the serious record store clerk, talked about Love Tractor and the Method Actors. You told him Herschel Walker.

Huh. I'd have to see it again. I don't remember that part of it.

The first song you played was "Radio Free Europe," the single. Why did you come back with the second song, on a national platform, and play something too new to be named? Feels like a very R.E.M. move in a lot of ways.

Well, because it was always exciting for myself and Peter as music fans to go see somebody play and have them play something that hadn't been released yet. It's a treat for a true fan because they get to hear something before anyone else does and before it has actually been put out on anything. It's more fun for us to do and I think it's more fun for the real fans to get to be the first to hear something.

So you have a great experience on the show, but then it's 12 years before you make it back on. Why?

I don't know. I'm sure there were probably scheduling problems, not having time when we went to New York. It wasn't deliberate on anyone's part. We loved the show, we liked the people there, we always enjoyed doing it. It was nothing deliberate. It just worked out that way.

The second appearance is on "Monster," and Dave debuted the footage from Madison Square Garden where then-CBS News anchor Dan Rather got on stage and did "What's the Frequency Kenneth" with you. That is still really weird.

(laughs) Yeah. He came over to soundcheck and sort of talked his way through it. Dan was a good sport and a fan of the band as well.

He had some interesting dance moves.

The next time you're on the show you play "The Great Beyond" from the "Man on the Moon" soundtrack, and a film about Andy Kaufman. Was that special considering the history of Letterman and Kaufman? There's that Jerry Lawler appearance on Letterman that's one of the best-ever moments on the show. The line "Andy Kaufman in the wrestling match" in some ways could be a Letterman reference.

Yes. Dave always had his finger on the pulse, about a lot of things. I guess there were a lot of circles completed on that show -- he had Andy and Lawler on the show and we get up and sing about it. I think Dave liked the symmetry of those things coming together.

Then it's "Imitation of Life." I watched "So. Central Rain" and "Imitation of Life" back to back, and of course it is 1983 to 2001, but wow, the transformation. Michael goes from hiding behind his hair in the first clip to bouncing across the stage exhorting the balcony. You go from a black T-shirt and black jeans to the fancy hair and the sunglasses....

Well, TVs good for that. You can watch how people change over time. You would certainly hope that you would grow into what you're doing if you're going to be doing it for that long.

And then three decades after you play the show, you're the one who breaks the news of his retirement on Twitter. How did that happen?

Peter and I were playing with Joseph Arthur. We were sitting in the little dressing room and listening to him doing his opening monologue. I looked at Peter and said, "Did he just say he was retiring?" Peter said, "Get ready for the joke" -- but there was no punchline.

I hadn't had a Twitter account for very long, and I said "should I do this?" I got to thinking: If I didn't, somebody else will. There;s no way this was going to hold fast until 11:30 at night. So I put it out there.

Was everybody OK with that? Ever hear from Dave?

Yeah, they heard. They interviewed me; they sent a CBS guy to talk to me after the show. I think they were fine with it. They had to know it wasn't going to last until 11:30. Somebody from the audience would have sent the word out. If it had to be somebody, I think they were glad it was somebody with a history with the show.

Is there a little moment you treasure most from playing there over the years?

Before the first show, Peter and I were sitting in the dressing room drinking beers and Dave walked in. He looked at the beer and he says. "You guys nervous?" We said, "Yeah, a little bit." He said, "Don't worry, it's not like it's a real show or anything."

You can still hear him saying that.

Exactly. That's him in a nutshell.

He's walking away after 33 years. R.E.M. called it a day after 31. It's clearly not the same thing as you are calling from the road now and still spend a lot of time playing and on the road. But is there advice you'd offer or insight into what it's like those first weeks and months away from doing the thing you've done you're entire life, and with which your identity is so wrapped up in?

What helps it pass?

You know, I'd say it's knowing that it's the right thing to do, to walk away. That's why I don't think Dave will have any problem. I think he feels good about the timing. If you feel in your heart like you know it's the right thing, then it's easier to deal with.

I am and always have been a huge fan, and I'll miss him. But he had a great run, and like I said, I know in his heart he feels good that it's time to move on to something else. I just wish him well.