Sexy "dad bods" are not progress: Fetishizing beer bellies only fat-shames others

If the choice is just Zac Efron or Seth Rogen, we are leaving a lot of guys out of the conversation 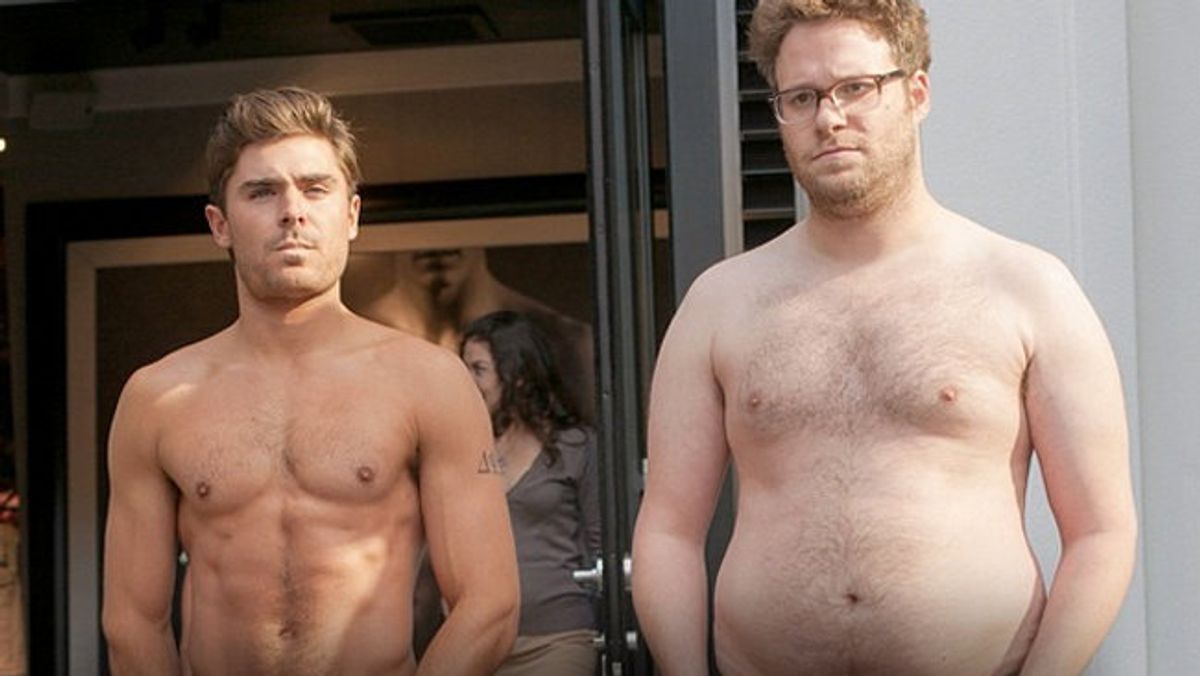 You would think that given my crushes on fat men like James Gandolfini, and the fact that my boyfriend weighs over 300 pounds, I would be all in favor of the dad bod trend the world seems to can’t get enough of. “Dad bod,” if you missed it, according to college student Mackenzie Pearson, whose essay sparked a flurry of impassioned stories, “is a nice balance between a beer gut and working out. The dad bod says, ‘I go to the gym occasionally, but I also drink heavily on the weekends and enjoy eating eight slices of pizza at a time.’ It's not an overweight guy, but it isn't one with washboard abs, either.”

On one hand, it’s great that we are giving men a tiny bit more room to be, well, themselves, and not as fastidiously obsessed with their weight as women have traditionally been in Western culture. But aside from the inherent sexism that women’s similarly large “mom bods” will never be quite as celebrated, which Pearson also wonderfully breaks down (as have Kristen Schaal and Brittany Gibbons), my biggest problem is that the “dad bod” craze doesn’t actually puncture our society’s obsession with policing other people’s bodies. It simply fetishizes one less thin type while carefully delineating who makes the cut.

For instance, Vox writes about Hollywood dad bods in the forms of Jon Hamm and Seth Rogen, then notes, “Real-life dad bods may be less appealing.” They also go on to say that “pop culture is full of instances of beautiful women throwing themselves at slovenly men,” citing Kevin James in The King of Queens, George Constanza on Seinfeld and Jon Favreau in Chef. I can’t support the dad bod DILF worship if it comes at the expense of men who may be genetically predisposed to have more than a cute beer belly.

“Dad bod” is one step forward, two steps back in terms of male body image and acceptance. Its advocates take such great pains to emphasize the parameters of the dad bod, as if the only alternatives are emaciation and sloth, with dad bod as a comfortably happy medium. But even the supposedly relaxed standards of a dad bod are not realistic for everyone. As Pearson told Slate in an interview, “A dad bod is a guy who is not incredibly chiseled, but at the same time, is not unhealthy. He’s not overweight.” Some people’s bodies are simply going to retain more weight, no matter what they eat. It’s called genetics. Does that mean Pearson et al have to find fat people attractive? Of course not. But let’s recognize that the way we stigmatize fat people is widespread, and an inherent part of praising dad bods.

The other rallying cry of dad bod fans is that they know how to indulge, that they aren’t ordering a salad (with the implied sentiment, like a girl), but instead, a steak—or maybe even two! Yes, I too like men (and women) who know how to relax around food, but this mindset insists that only those who eat whatever they want get chubby or fat, and that’s just not how every body operates. In December, without using the phrase du jour, Katy Horwood wrote a piece entitled “Why big men are sexier than gym bunnies” in which she stated, “when a man enjoys his food, embraces excess and prioritises the good life over a two hour run every morning, it’s smokin’ hot.” The fact is, there are men out there who might run or play sports and eat healthily and still have a gut (because, again, genetics), but we’re not talking about that.

Lastly, “dad bod” trend pieces have almost all focused on why you can still get laid if you have a dad bod. Case in point: Pearson’s article was titled “Why Girls Love The Dad Bod.” But women have been arguing for seemingly ever that we don’t want to be subjected to the whims of the male gaze, so why is it okay to simply do that same thing when the object of the gaze is men? Yes, I’m well aware that there are plenty of articles of the “he doesn’t care about your weight” variety aimed at women, and those irk me just as much. Who cares? I would like everyone regardless of gender to be more focused on their personal health and comfort with their bodies, whatever size they are, than trying to meet the ever-changing cultural standards for what’s sexy (because you know “dad bod” lust won’t last forever).

I’m not saying I expect the world as we know it to come to a screeching halt and suddenly stop shaming men or women for being overweight or equating being fat with eating to excess. But let’s not pretend “dad bod” is some major body image breakthrough. It’s not—though it has the potential to be a step in the right direction, if it could recognize dad bods as one among many acceptable body types.