The media's Hillary Clinton problem: It's very simple -- the media is annoying

Whining about questions helps, but it's not enough. The media could threaten to stop covering her events 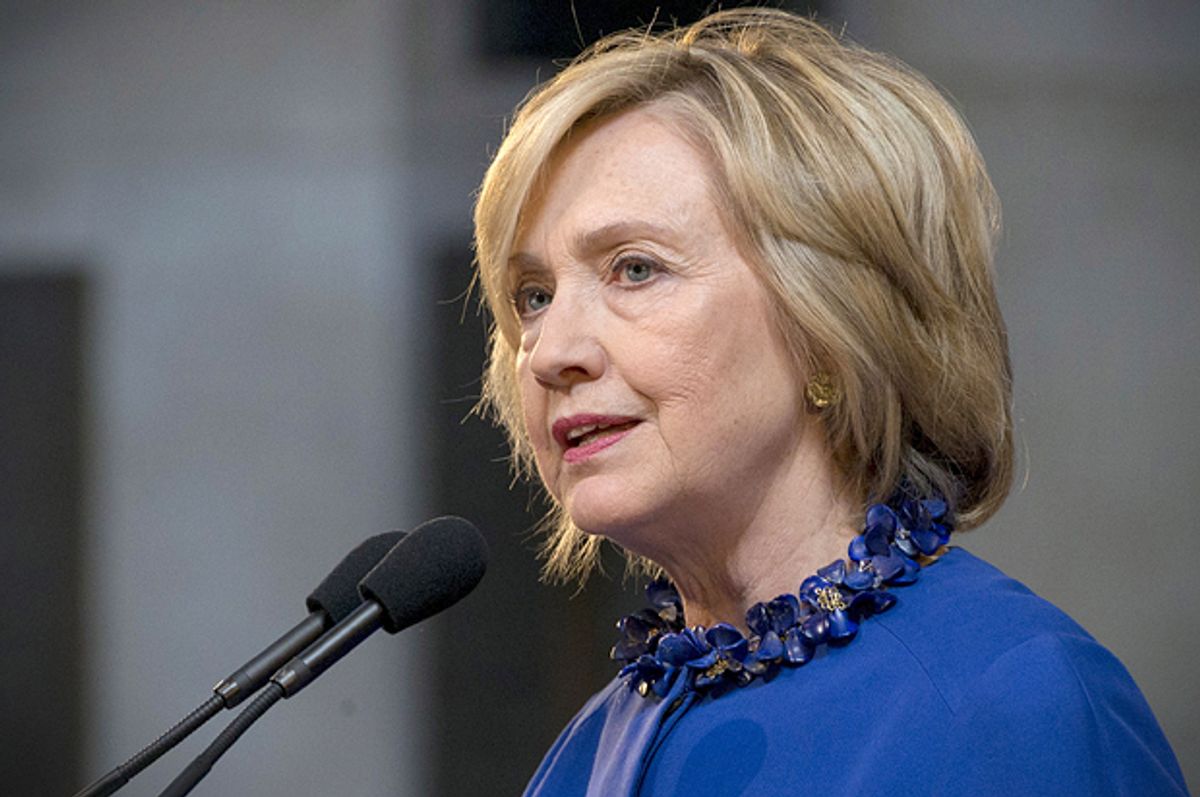 The political press is having a difficult time adapting to Hillary Clinton's 2016 presidential campaign. She does not want to talk to the press. There's a lot of history behind Clinton's particular example, specifically a three-decade relationship of mutual hatred and mistrust between the press and the Clintons. But that's not the reason that Hillary Clinton is going weeks without fielding questions from the press corps. It's because she doesn't need to. She is leading every Democratic primary poll by dozens of percentage points, and the press has shown itself more than willing to cover her events and her campaign statements without getting anything in return.

Hopefully members of the press haven't deluded themselves into thinking that they're getting more facetime with Republican candidates because those candidates like them, or enjoy talking to the press. No politician likes the political press, because the political press is annoying. It's just a simple calculation: there are ~15 candidates positioning for exposure to the public, and so they need to go to the press. They need their mugs on the nightly news if they want Republican primary voters to know they exist and may have something appealing to offer, and, by the way, would appreciate donations. If, say, Jeb Bush had a 50 percentage point lead in the Republican primary field, you wouldn't see him putting himself through this wringer voluntarily. (Which would be a shame, because that was really fun.)

Is it a problem that Hillary Clinton is going weeks without fielding questions from reporters? I certainly think so. If a candidate is expects the news media to print their releases and air coverage of their events to get their ideas out, they should be expected to answer follow-up questions from that same news media that they're using.

If this impasse is to be solved, though, members of the political press corps are going to need to get over the belief that they're entitled to access. That God himself created the political press corps and decreed to all politicians, Thou shalt talk to Chris Cillizza if thou darest become President. Alas, God didn't instruct Moses to jot this down atop Mount Sinai. The Constitution forbids the government from abridging freedom of the press, but there isn't any subclause in there about how Hillary Clinton needs to put in 15 minutes with Mark Halperin anytime she visits the Pizza Ranch in Cedar Rapids, and there isn't any statuary law on the FEC's books requiring the same.

Media critic Jay Rosen captured some of the more comical expressions of this sense of entitlement in a piece yesterday. The Washington Post's Cillizza, for example, seems to think there is some established definition of "the role of the media" in covering presidential candidates. "The role of the media in this process," Cillizza writes, "is to show voters who these people are, really, and to explain how these people would govern the country if elected. Like the media or not, that’s a very important role — and one that is essential to a functioning democracy." Cillizza's colleague at the Washington Post, columnist Ruth Marcus, is also of the mind that Hillary Clinton needs to answer all the questions "because that’s part of the process." Well, Hillary Clinton disagrees. So whatcha gonna do?

No, I don't mean that rhetorically: What? There are options beyond going off in a huff and stating that Hillary Clinton needs to take questions just because that's the way it's always been done. (Which isn't entirely true, anyway.) As Rosen writes, it's a matter of thinking about power relationships. Hillary Clinton's power to shut out the press is strong because of both her position within the Democratic primary field and new technologies that allow campaigns to disseminate information without going through the traditional middle man. But that doesn't mean the press is without power of its own to leverage.

Whining/Shaming. This is the only power the press has at which it currently excels. It is news that Hillary Clinton can go several weeks without fielding a single question from the press. It's perfectly reasonable for the press to use its platform to point out that the leading Democratic presidential candidate is going great stretches of time without talking to a single reporter. You can state this fact without getting into the sort of off-putting, self-righteous tone that Cillizza and Marcus do. This might begin to negatively affect Clinton's public image, and Clinton might feel compelled to take questions. This appears to have happened Tuesday, when she finally took a few questions from the press. It's a positive development, but it may be only short-term: now she can go another long period of time without taking questions, maybe a few weeks, when she'll offer another perfunctory 10-minute availability.

Doing other journalism stuff. As Rosen writes, there are ways to do campaign journalism about Hillary Clinton that don't involve following her around and not asking her questions! You can dig up stories on Hillary Clinton, and if they look like they're going to be damaging, she might feel compelled to respond. There's some term for this. "Investigative reporting" or something. This is a Good Option.

Writing really negative stories about Hillary Clinton until she starts taking questions. This would be a power move indeed. Reporters and editors from mainstream media outlets can decide that they will just hue their stories with shit-talk until she offers more press avails. A sample New York Times story might go something like this:

Clinton, who has a dumb face, argued that her plan would allow millions of students from lower-income families to receive affordable college education. Most Iowans, however, believe her plan to be dumb. And an impartial New York Times investigation has confirmed that it is dumb, and boring, and she is a fraud.

"Hillary Clinton is dumb, as is her plan," everyone was reported as saying.

Well, maybe more discreet than that.

The problem with this option is that it is wildly unethical and inappropriate and we're mostly including it in here as a joke to lighten up this dumb story about the dumb media. It's probably crossed many a mind, though.

Cutting her off. Hillary Clinton does rely on the media. When she's giving a speech on criminal justice reform or immigration or the heroin epidemic, when she's hosting a well-curated roundtable with "everyday Iowans," when her campaign is issuing a press release to roll out some bit of information, she and her campaign expect reporters to write it up and/or stream her remarks on television and online. Social media makes it so that she's not entirely reliant on a third party to get her message out. But for the most part, the political media still controls the infrastructure for broadcasting a candidate's message, and this is its greatest source of leverage.

Why not threaten to deny a candidate the use of that infrastructure?

If Hillary Clinton is not going to field a single question, then a news outlet could let the Clinton campaign know that it will neither write up, televise, nor even acknowledge in anyway Hillary Clinton's trip to Iowa to hug a DREAMer or whatever.

In order for this to be effective, news outlets would have to organize. This would be extremely difficult in the new media environment. It would have been much easier "back in the day," as they say, when there were three television stations and like 10 newspapers and this was "the media." Now there are a full seventy trillion news organizations in Iowa alone. The major media outlets could all band together, but even then some pipsqueak #millennial scab from the local college paper could go break the picket line and get the Hot Scoop about how Hillary Clinton hugged a DREAMer. Still, if all the major media outlets -- as in, the ones that can afford to send reporters and camera crews everywhere Hillary Clinton goes -- boycotted Clinton, that would likely get her attention.