"Tomorrowland": Can nostalgia for the future save our doomed planet? 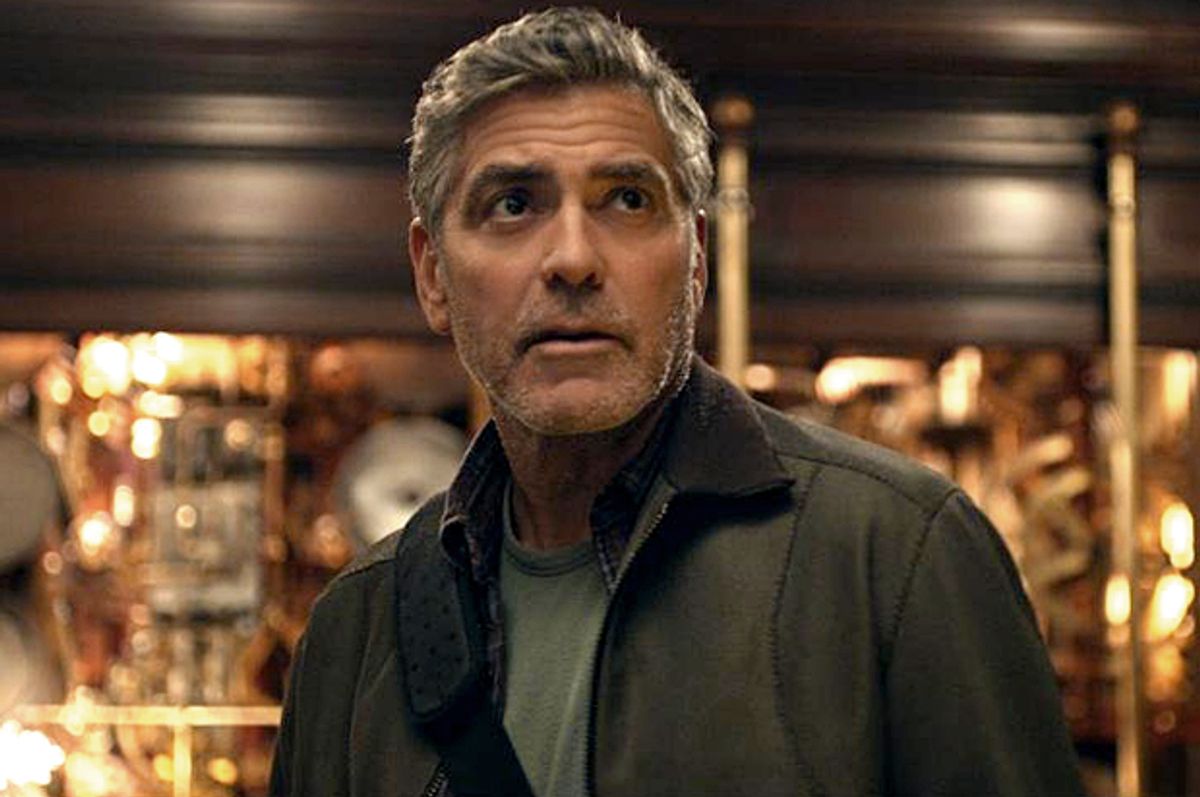 From the moment you first see that 1960s atomic-energy symbol as the middle “O” in the opening title credit for Brad Bird’s massive Disney summer adventure “Tomorrowland,” you know it’s bad news. I mean, right? Once upon a time, that stylized little graphic of particles looping around a nucleus stood for a future of unlimited clean power; now it stands for Fukushima and Three Mile Island and concrete-reinforced subterranean pits that will still be full of radioactive waste long after the human race has perished from the planet. But the wonder of “Tomorrowland” – and with all its flaws and its hidebound Disney formula, it really is wonderful – is that Bird’s tale of nostalgia for the lost future manages to recapture some of that original, optimistic meaning without losing sight of the newer and darker one.

Bird built his reputation as a director of ambitious, family-oriented animated films, making “The Iron Giant,” “The Incredibles” and “Ratatouille” before moving into live action with the triumphant 2011 action spectacle “Mission: Impossible – Ghost Protocol.” If that movie achieved two unlikely goals, resuscitating a seemingly defunct franchise and reviving the flagging star career of Tom Cruise, Bird’s ambitions in “Tomorrowland” are higher still. If you’re old enough to remember the original significance of that atomic-power symbol – and to understand the iconic importance of the 1964 World’s Fair in New York’s Flushing Meadows, a central touchstone of “Tomorrowland” – then you also remember the live-action Disney films that dominated Saturday-morning moviegoing in the ‘60s and ‘70s. It’s a much-derided tradition that included a good deal of insipid and forgettable junk (Dick Van Dyke as “Lt. Robin Crusoe, U.S.N.”), but at its best – “Mary Poppins” and “Bedknobs and Broomsticks,” sure, but also “That Darn Cat!” and “The Love Bug” – produced a number of blissfully enjoyable family experiences, large doses of innocence flavored with just a smidgen of adult experience.

What Bird and co-writer Damon Lindelof seek to do in “Tomorrowland” is to recapture the energy and enthusiasm of those classic Disney offerings, while also repackaging and reframing it for a much different and far more guarded era. I can understand why some viewers feel let down by the conventional story they’re telling here, which is a familiar fable about a plucky teen who might just be able to counteract grown-up cynicism and save Fairyland from self-destruction. But for my money they come doggone close to succeeding: The visual thrills and unjaded inventiveness of “Tomorrowland” are off the charts, as it careens back and forth between our world, plagued by climate change, environmental degradation and political crisis, and an alternate dimension where all the futuristic dreams of the Jet Age, imagined so lovingly at that 1964 World’s Fair, seem to have come true.

Even the preachy and sentimental final montage of “Tomorrowland,” which strains to fend off all possible political and cultural criticism, brought me to the edge of tears. I watched this movie from a particular perspective, as the father of a geeky and technology-obsessed 11-year-old, who is only now coming to grips with the fact that he was born into a world that seems to have lost its yearning for adventure and its zest for the future. He is likely to love this movie more than words can express, and to discern deep meaning and purpose in it. With its ardent promise that hope is not lost, “Tomorrowland” could serve as a formative inspiration for my son and many other kids like him, and for that alone I am profoundly grateful.

I am often dismissive of spoiler concerns (as some of you are eager to remind me), but in this case I really want to be cautious about not revealing too much. I think we can say that George Clooney, in his best crotchety loner mode, plays a reclusive inventor named Frank Walker, who long ago – at that legendary and heartbreakingly realized Flushing World’s Fair, in fact – had a childhood encounter with a strange little girl named Athena (Raffey Cassidy) that changed his life. Back in the 21st century, Athena reappears (looking no older than she did 50 years ago) and settles on a new target, a plucky tomboy genius named Casey (irresistible newcomer Britt Robertson) whose task is to drag Frank out of his half-century funk. Oh yeah – she also has to outwit hordes of killer cyborgs who seem a little too obviously imported from “The Matrix,” and then she has to save the planet from imminent destruction. But that’s it.

There are any number of spectacular special-effects scenes in “Tomorrowland,” and if they ultimately get repetitious all are delivered with the combination of good humor and unquenchable brio that feels like Bird’s trademark. It turns out that interdimensional travel leaves you super dehydrated, for example – and creates a seamless opportunity for Coca-Cola product placement! (In some weird way, I didn’t mind. Finding that they had Coke in another dimension would be oddly reassuring.) It also turns out that Gustave Eiffel’s well-known construction in Paris has a secret purpose we never suspected, and that Nikola Tesla, Thomas Edison and Jules Verne were all in on it. (I promise I’m stopping there!) Hugh Laurie gets a slightly undercooked role as the semi-villainous scientist-prince of Athena’s decaying utopia, and Kathryn Hahn and Keegan-Michael Key make amusing cameos as a pair of sci-fi collector geeks up to no good.

But I think the real appeal of “Tomorrowland” does not lie in the splashy CGI creations or the giant-robot fight scenes (because we really have seen enough of those) but in a secret ingredient that’s harder to define. For one thing, Bird never seems bored or exhausted by the story he’s telling, and his central characters are clear and appealing. Of course we know that Clooney’s Frank will turn out to be decent after all, and since he’s George Clooney we know he won’t behave creepily toward the cute teenager camped out on his front porch. Frank’s relationship with Athena is the secret engine of his personality, which won’t seem much like a secret to adult viewers, and this role demands a kind of purity from Clooney that makes it one of his best film performances.

Some people will find “Tomorrowland” total cornball, but I didn’t. At a philosophical level its subject is deeply intertwined with its form and its message: We have lost faith with the future, and the effects are poisonous. We have gotten addicted to gloom and paralyzed by it, Bird argues; we have all seen the writing on the planetary wall, shrugged, and gone back to our cubicles and our iPads. Our civilization’s death wish and self-hatred have grown so strong that they threaten to become self-fulfilling prophecies, devouring both will and courage. I certainly don’t think our problem is quite that simple, and “Tomorrowland” comes dangerously close to announcing that the next generation, inspired by the not-quite-dead spirit of ’64, will save us after all. But I find considerable simplicity and truth in the basic premise that our fixation with dystopia is not helpful.

I won’t be the first person to observe that “Tomorrowland” is strikingly similar, in terms of theme and narrative structure and other elements, to Christopher Nolan’s “Interstellar.” Both films wonder ruefully what became of the glorious technological optimism of the Space Age, ask whether hope can be rescued from the ruins, and imagine human redemption through love. You could almost say that the magical realm that Athena offers to Casey and Frank in “Tomorrowland” is the same constrained, extraplanetary paradise where Matthew McConaughey winds up near the end of “Interstellar.”

For all its technical magnificence, the Nolan film is a maudlin and despairing slog through a ruined future, and the only version of hope it offers is a paradoxical joke, a time-loop into an infinite nirvana that is indistinguishable from extinction. I have little or no desire ever to watch "Interstellar" again, and I don't feel that way at all about "Tomorrowland," which is exhilarating on every level. In positioning itself as a family film constitutionally forbidden to surrender to hopelessness, Bird's film actually poses a more radical challenge. We have no habitable planets to flee to, and no galactic supercomputer will grant us immortality. To have hope at all we must stop dwelling on doom and imagine the alternatives. We must rescue our dreams of tomorrow, however tarnished and ridiculous they may appear, from the wreckage of today.