From his tribute to his family to his farewell speech, there were plenty of moments that had us choked up 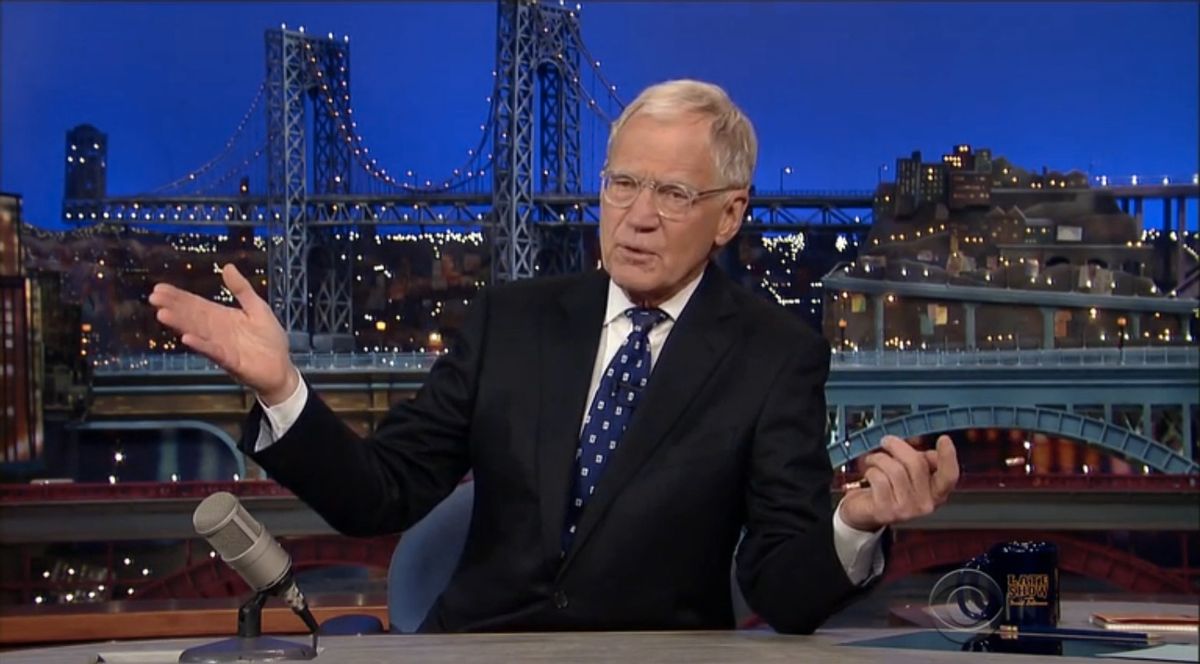 As expected, David Letterman remained stoic and dry-eyed through his final performance, but their were definitely some tissues being passed around the house as the King of Late Night bade his final farewell. Amid the clips and ironic sendoffs, there were plenty of moments of real heart, from his tribute to his family to his earnest farewell speech. Here are the ten of the most affecting moments:

1. The standing ovation
While Dave may have wanted to go out with minimal fanfare, the audience had a different idea, greeting the iconic host's final walk-on with a clap that didn’t want to end.

2. When all his celebrity friends stopped by to say goodbye
The sheer amount of star power assembled for Dave’s final top ten list — Bill Murray, Chris Rock, Julia Louis Dreyfus, Tina Fey, Peyton Manning, and others — was a testament to just how revered Dave is in the showbiz community, and a reminder of the wonderful relationships that have always been the heart of the show. It was also sort of a roast, because would Dave have it any other way? As Jerry Seinfeld put it, "I have no idea what I'll do when you go off the air -- you know, I just thought of something. I'll be fine."

3. ...and what he said to them
While the list itself was funny, the individual goodbyes Dave gave to all of them were even better: Telling Louis-Dreyfus how much he loves “Veep,” his childlike glee at seeing Peyton Manning, and his sly whisper to Bill Murray “I saw you on TV last night, are you alright?"

3. The 'Letterman with kids' montage
While it was a laughably (and predictably) understated move for Dave to send himself off with what was largely a clip show, his montage of interactions with kids made it worthwhile -- a funny and playful reminder that the famous curmudgeon always had a soft side.

4. His loving tribute to his family
In a rare private moment, Letterman thanked his mother, a frequent guest, as well as his wife Regina Lasko and 11-year-old son Harry, who were sitting in the audience. As he put it: “Seriously just thank you for being my family. I love you both and really nothing else matters, does i?.” For a man who has lived much of his adult life in the spotlight, this glimpse into his private world was perhaps the most moving tribute amid a show full of them.

5. When he shouted out to his son’s friend Tommy Roboto
“Harry wanted me to introduce his buddy Tommy Roboto,” Letterman said, as the camera panned to his little pal grinning in the audience. “Tommy, right there. There’s Tommy. Go get ‘em, son!”  It was a totally absurd, silly, off-the-cuff moment -- the sort of thing that we'll probably miss the most when Dave is gone.

6. The behind-the-scenes montage
The look at Dave's daily life behind-the-scenes was a rare peek behind the curtain, and a testament to the hard work, love and energy that has gone in to building the late night institution every day for the past few decades.

7. Dav'es tribute to Paul Shaffer
The "Late Show" band-leader has been with him since the beginning, and Dave gave him a lovely sendoff, calling him his best friend and paying tribute to his unparalleled talent. He also gave shoutouts to the individual band members, as well as to his crew, including fan favorites like Biff, serving it all up with his usual dose of humility. As he put it: "These people deserve more credit for this show than I ever will."

9. His final speech
Dave's final speech, in which he thanked his staff, underplayed his own accomplishments, and undercut sentiment with wry self-deprecation, was exactly what we’d expect from Dave -- no more, no less. He finished the whole thing off with a simple, classy farewell, saying: "The only thing I have left to do, for the last time on a television program: Thank you, and good night."

10. The Foo Fighters' sendoff
We can’t decide what was more emotional — Letterman's Foo Fighters introduction, in which he described how the band canceled their tour to appear on the show after his quintuple bypass — or the song they chose, “Everlong,” which features lines like “And I wonder if everything could ever feel this real forever, if anything could ever be this good again.” Sob. We'll miss you, Dave.