Six officers have been charged in the death of Freddie Gray. At least one has a history of abusing his authority 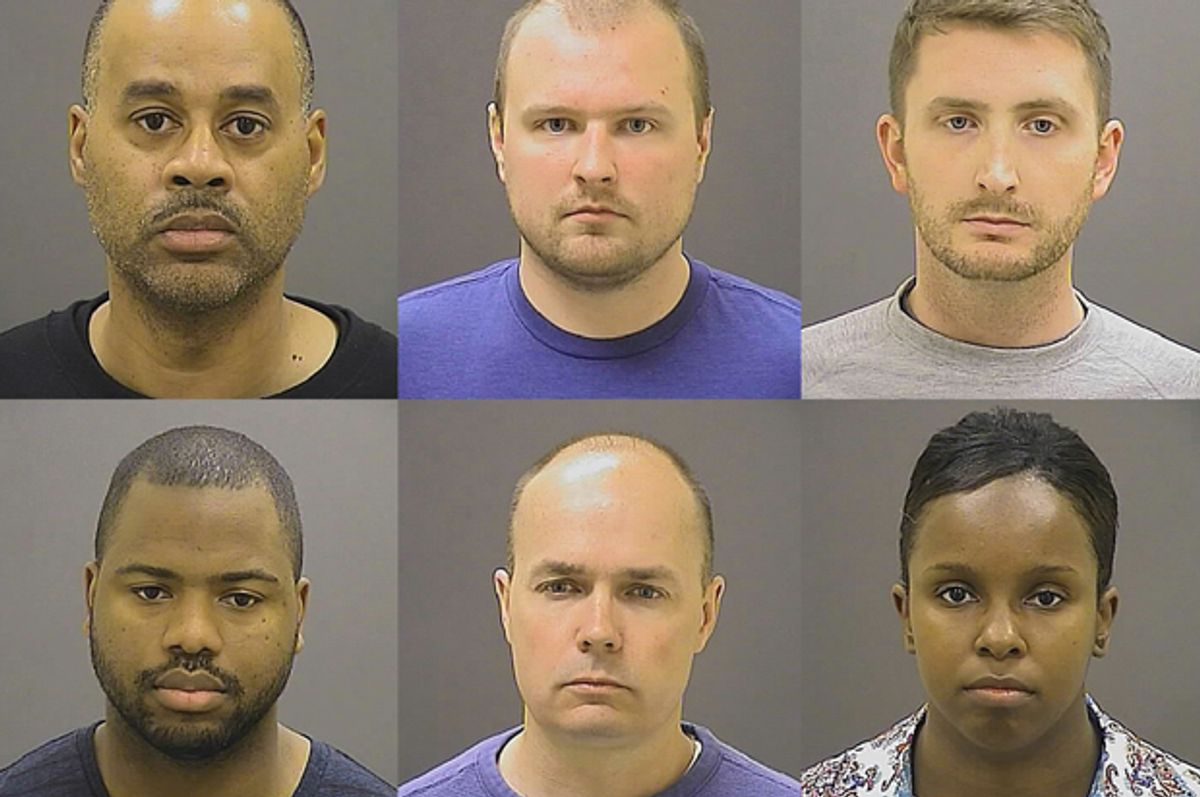 We’ve learned a lot about policing in Baltimore since the six police officers involved in Freddie Gray’s arrest were charged in connection to his death.

One of the so-called Baltimore Six has a highly questionable history of abusing his authority; according to the Guardian, he tried to get his ex-girlfriend’s husband arrested in connection with a personal dispute. Besides the personal issues of some of the officers, Americans learned a lot about the department’s use of force. Over the past four years, the city of Baltimore has spent more than $5.7 million to settle lawsuits connected to allegations of abuse by its police department. The Baltimore Sun also reported that many of the vans in the Baltimore region aren’t equipped with seat belts, which opens up more speculation about the BPD’s alleged use of the “rough rides” locals have complained about. Rough rides and other abusive practices might account for the shocking revelation that thousands of suspects in Baltimore are turned away from jails because they are too badly injured.

But another rarity that took place in Gray’s case is that the officers were charged for his death to begin with. On May 1, state prosecutor Marilyn Mosby brought charges against the officers, evoking praise from activists and many in the black community but fierce opposition from the department’s police union. Then there were the arrests last week of two Baltimore correctional officers charged with looting that was caught on video.

Here are eight troubling revelations that have come to light since the officers involved in Freddie Gray’s death were arrested and charged.

1. The most senior officer charged in Gray’s death demanded the arrest of his ex-girlfriend’s husband who lives in a nearby town.

Two weeks before Gray’s arrest, Lieutenant Brian Rice walked into the Westminster Police Department demanding that officers go to the home of Karyn McAleer, Rice's ex-girlfriend and a fellow Baltimore cop with whom Rice has a young son, to arrest her husband, Andrew McAleer, because he was allegedly violating a court-issued peace order to stay away from her and the home, the Guardian reports.

“Heads will roll if something happens to her or the children, if you do not go arrest him,” Rice said, according to Westminster police officer Christopher Obst who was at the station at the time. Rice was told to stay out of a situation with a court order that didn’t involve him. Officers also asked for his identification, which he refused to give. When Rice was asked for his phone number, he gave an incomplete one. Westminster police sergeant Nicole Ensor reported the incident to Baltimore police. Officials from the BPD didn’t say whether or not Rice was disciplined for his behavior.

In 2013, Rice was placed on a temporary restraining order after he was accused of threatening to kill Andrew McAleer after several encounters.

Neill Franklin, who served as a lieutenant colonel in the Baltimore police force until 2004 and commanded the department’s education and training services, told the Guardian that the two incidents should raise questions about Rice’s suitability to wear the uniform.

“He is in a position of authority, not just in the community, but over the top of other police officers, giving directions and guidance. Obviously he’s the one in charge, on the scene where Freddie Gray is arrested so the other officers are definitely going to take his advice and his direction and orders,” Franklin said.

2. The city of Baltimore has spent more than $5.7 million settling cases of alleged police brutality dating back to 2011.

More than 100 people have won court settlements or judgments totaling $5.7 million related to allegations that Baltimore police officers abused them, according to the Baltimore Sun. Some of the victims suffered broken jaws, noses, arms, legs and ankles. Other experienced head trauma or kidney failure and some were killed. Most victims were black Americans.

One of the victims, Jerriel Lyles, says Baltimore detective David Greene hit him so hard during a 2009 arrest that “it felt like his radio was in his hand.” His eyes swelled and blood dripped from his eyes and nose. The detective claimed Lyles, who was never charged with a crime during the incident, poked himself in the eye. The jury didn’t believe Greene’s account and ordered the city to pay Lyles $200,000.

The Sun estimates that the $5.7 million the city spent on settlements could have paid for the renovations of more than 30 playgrounds or a state-of-the-art recreation center.

3. Most police vans in the Baltimore region don’t have seatbelts.

A Baltimore Sun report found that vans in Anne Arundel, Harford, Howard and Baltimore counties do not have seat belts. One of Carroll County’s two police vans has seat belts.

It is an important point, because Baltimore state's attorney Marilyn Mosby accused officers involved in Gray’s arrest of violating department policy by not securing him in a seat belt. Gray suffered a fatal spine injury while in police custody, according to Mosby. The department has been accused of taking suspects on “rough rides” in police vans, the practice of purposefully tossing people around in the back of a car or van with the intent to hurt them. Since May 1, the day Mosby’s office charged the six police officers involved in Gray’s death, at least two other men have come forward accusing the department of taking them on rough rides.

Since 1997, at least three people have been paralyzed by such rides, according to a review by the Sun. One man died as a result, which won his family a $219,000 payout.

4. Nearly 2,600 suspects have been turned away from Baltimore city jails because they were too injured to be admitted.

As AlterNet previously reported, from June 2012 to April 2015, nearly 2,600 detainees were so badly injured by the time they arrived at Baltimore jails that the jails would not take them. The Baltimore Sun originally reported that many of the detainees had broken bones and head injuries. Either the arresting officers did not know about the injuries or ignored them altogether.

As a result, the city has shelled out tens of thousands of dollars to arrestees who told officers of injuries or pre-existing conditions but did not receive medical treatment.

Here is one story of someone who went to Central Booking injured, but was denied treatment, per the Sun:

John Bonkowski, who received a $75,000 settlement over allegations that he was beaten by an officer in 2012, "complained of pain at the scene but was denied medical treatment," according to his lawsuit. He was held without treatment at the Central District Station for about three hours before being taken by ambulance to a hospital where doctors found he had a fractured ankle, a broken jaw and cuts on his head and face, the lawsuit said.

Bonkowski, who had driven his car while intoxicated through a gate in a downtown parking garage, accused officers of pulling him out of a car and pummeling him with their fists and batons. Officers contended that Bonkowski crashed into another car and hit an officer.

There are many more stories like Bonkowski’s. Read them at the Sun.

5. Presidential aspirant Martin O'Malley may have some explaining to do about his record as mayor and the hyper-agressive policing he brought to Baltimore.

During Martin O’Malley’s time as mayor (1999 to 2006), the crime rate in Baltimore dropped 16 percent while arrests rose dramatically, something his critics say was a result of heavy-handed “zero tolerance” policing tactics. In 2005, 108,447 people were arrested, or about one-sixth of the city’s population, according to the Washington Post. About two-thirds of those arrested were jailed for nonviolent offenses.

Critics of O’Malley, who has said he would run to the left of Hillary Clinton, say he helped create the police culture that has culminated in Freddie Gray’s death, and the unrest that followed.

"We still have men who are suffering from it today,” Marvin 'Doc' Cheathem, a past president of the Baltimore branch of the NAACP, which won a court settlement stemming from the city’s policing policies, told the Post. “The guy is good at talking, but a lot of us know the real story of the harm he brought to our city.”

Bishop Douglas Miles, a community leader, told the Post that O’Malley’s police department “set the tone for how the police department in Baltimore has reacted to poor and African American communities since then.”

“None of us are in favor of crime,” Miles said. “But we also recognized that you couldn’t correct the problem through wholesale arrests.”

To be fair, police brutality in Baltimore wasn’t created during O’Malley’s time in office. Back in 1942, 2,000 black residents marched from Baltimore to Annapolis to protest the fatal shooting of a black soldier by a white city cop.

6. No matter how badly cops behave, there will be legions of supporters willing to finance their defense teams.

Soon after the six officers involved in Gray’s death were charged, a GoFundMe campaign was started to raise money for their legal fees. The campaign was met with harsh criticism, forcing the crowdfunding site to shut down the page.

"GoFundMe cannot be used to benefit those who are charged with serious violations of the law," said Kelsea Little, GoFundMe's public relations manager, according to the Los Angeles Times. "The campaign clearly stated that the money raised would be used to assist the officers with their legal fees, which is a direct violation of GoFundMe's terms."

7. The Department of Justice has opened an investigation into the Baltimore Police Department, as it did in Ferguson.

Days after six cops were charged in Gray’s death, Mayor Stephanie Rawlings-Blake requested that the Department of Justice investigate the Baltimore Police Department to determine if it has engaged in patterns of unconstitutional policing, according to the New York Times. The DoJ opened a similar investigation into the Ferguson, MO police department and found a pattern of shockingly racist practices.

Baltimore police commissioner Anthony W. Batts said he is committed to reforming the police department, even if it takes an outside agency to help achieve it. “I am willing to do anything it takes to win that trust back,” he told the Times. “If it’s D.O.J., whatever it takes.”

Nearby Prince George County Police Department has also experienced federal oversight, from 2000 until 2009. In the 10 years leading up to the oversight period, its county police shot 122 people and killed 47. Nearly 50 percent of the suspects killed were unarmed. Since the oversight has been lifted, Prince George’s police department has killed 14 suspects. Among other things, the federal oversight process required police to install in-car cameras.

8. Two city correctional officers were charged with looting during the city’s unrest.

Two Baltimore corrections officers, Tamika Cobb and Kendra Richard, were captured on video taking items out of a 7-Eleven on April 25 during the unrest, according to the state Department of Public Safety and Correctional Services. Both officers were charged with theft and burglary and placed on unpaid leave.

We will surely learn more about Baltimore policing in the coming months, though given how widespread police brutality is, it is likely that another high-profile police brutality case in another city may take over the national headlines soon.