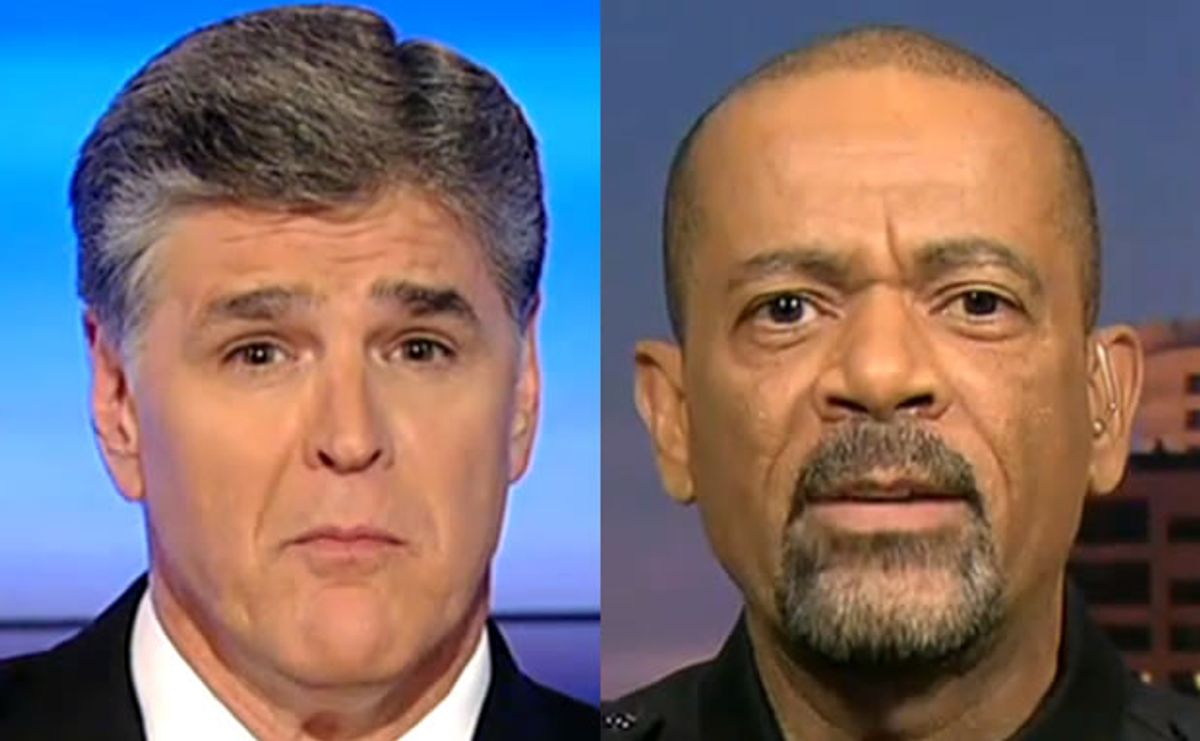 On Wednesday night, Sean Hannity spoke to Milwaukee Sheriff David Clarke about the recent civil unrest in Ferguson and Baltimore, and the sheriff didn't mince words -- neither about the state of American inner cities, nor who he believes is responsible for it.

On Tuesday, Sheriff Clarke testified before the House Judiciary Committee’s hearing "Policing Strategies for the 21st Century," and blamed much of the civil unrest on "false narratives" being peddled by the liberal media and President Barack Obama, citing Eric Garner's "I can't breathe" and "#BlackLivesMatter" in particular.

"Black-on-black crime is the elephant in the room," he argued. At the hearing, he received pushback from Democratic Representative Rep. Hakeem Jeffries, who noted that 83 percent of white people are killed by other white people -- but on "Hannity," he was allowed to speak at length and unchallenged.

"I want to keep this focused on where we can really make some strides," the sheriff said, "and that's where we start to shame this culture, this black subculture behavior that denigrates the work, blood, sweat and tears of those who had to live through slavery and Jim Crow."

"They would shun this sort of behavior, Sean. They wouldn't celebrate as modern liberalism has."

"You say 'modern liberalism' caused this and the 'elephant in the room' [is] black-on-black crime," Hannity replied. "Why is [Obama] reluctant and resistant to ever talk about the deaths in Chicago or other inner cities? Why?"

Sheriff Clarke said that it was political expediency on the president's part, because he has "succeeded on a strategy of divide-and-conquer, with this fictitious war on women, the class warfare of the 1 percent versus the 99 percent, and he's won two presidential elections on it, so why should he stop?"

"You are the president of the United States, the leader of the free world, the occupant of the White House. How can you stand up and kick white voters in the teeth? That's what you're doing, Mr. President [and] this has been very destructive for America."