The Catholic Church's American downfall: Why its demographic crisis is great news for the country 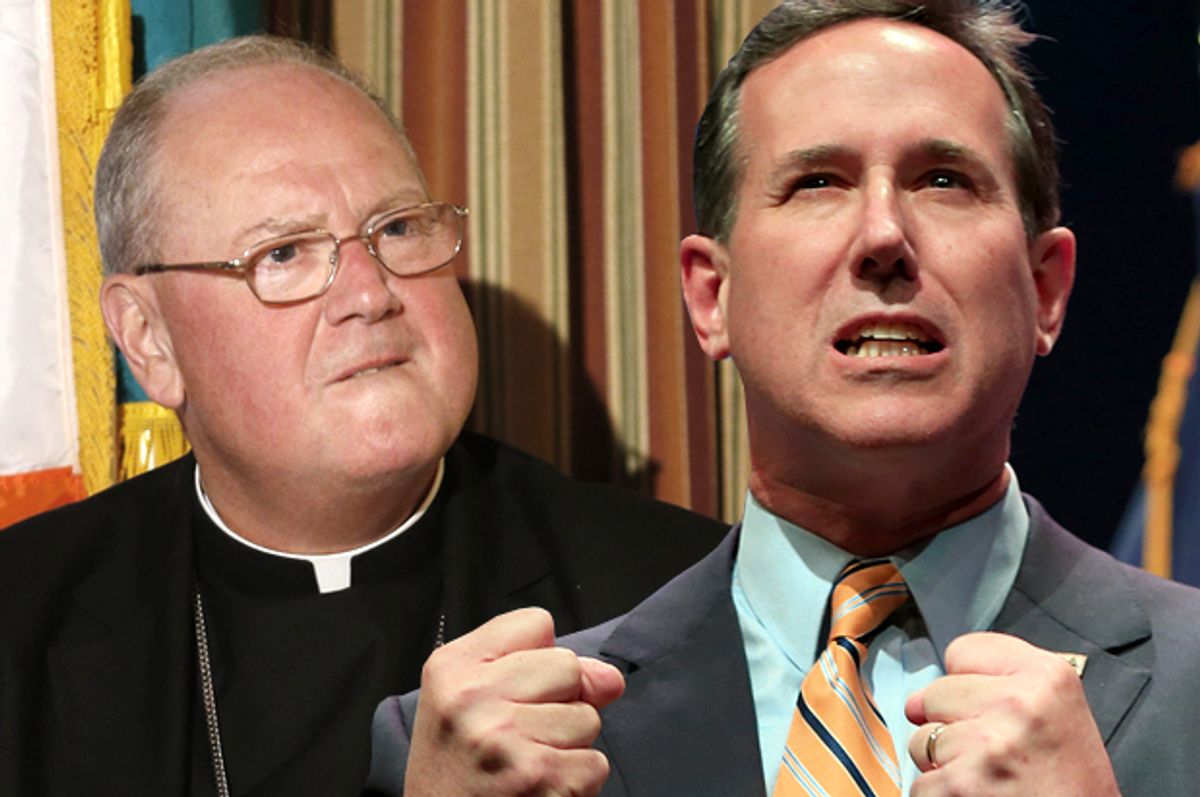 The big news out of the new Pew poll on Americans and religion was the precipitous drop in the number of Americans calling themselves “Christian” and its potential impact on the Christian Right and future religion itself in the U.S.

But there’s another number lurking in the poll that may prove just as consequential: there are 3 million fewer people calling themselves Catholic today than in 2007, the last time Pew conducted their extensive poll. As a result, the share of the U.S. population that identifies as Catholic dropped from approximately 24 percent to 21 percent.

Why is this such big news? Because despite unpopular popes and still-simmering pedophilia scandals, the percentage of Catholics in the U.S. has remained remarkably steady for decades. The relative stability of the Catholic population allowed many on the Catholic right to dismiss calls for reform in the church and gave the Catholic bishops political clout when it came to opposing things like no-cost contraception in the Affordable Care Act in the name of “Catholics.”

But now it appears that the Catholic Church is in a demographic free-fall, as it sheds adherents faster than any faith other than the mainline Protestant denominations, which have been in decline for decades. Nearly one-third of all American adults were raised Catholic, but a stunning 41 percent—four in ten of those who marched to the alter in their little white First Communion dresses and suits—no longer identify with Catholicism.

Why is the Catholic Church suddenly crashing? The reality is that the Catholic Church has been shedding adherents for a long time. But it was gaining new parishioners just as fast, thanks to the dramatic increase in Hispanic migration to the U.S. The influx of Hispanics, who are overwhelming Catholic, helped make up for the departing white, native-born parishioners and masked their continued defection from the church. As a result, one-third of Catholics in the pews today are Hispanic.

But now the Hispanic influx into the church has slowed, largely as a result of a decline in Hispanic migration to the U.S., which since hitting a peak in 2007 has dropped as a result of the recession. And Hispanics too are increasingly abandoning the Catholic faith. The Pew survey found the percentage of Hispanics calling themselves Catholic dropped below 50 percent for the first time, from 58 percent in 2007 to 48 percent today. And while nearly 20 percent of Hispanics now identify as Evangelicals, that’s only up three points since 2007. The big jump is in the number of unaffiliated Hispanics, with 20 percent of Hispanics saying they don’t have a religion, up six points since 2007.

The big decline in the number of Catholics may give progressives in the church a critical boost going into this fall’s Synod on the Family, which is part two of the historic meeting of bishops that Pope Francis called to consider reforms like allowing divorced and remarried Catholics to receive communion. For years, conservatives have pointed to the Catholic Church’s relatively stable numbers during the orthodox papacies of Popes John Paul II and Benedict as evidence that it is conservative policies that will ensure the future of the church. As New York Times columnist Ross Douthat famously warned in 2012:

[T]oday the Episcopal Church looks roughly how Roman Catholicism would look if Pope Benedict XVI suddenly adopted every reform ever urged on the Vatican by liberal pundits and theologians. It still has priests and bishops, altars and stained-glass windows. But it is flexible to the point of indifference on dogma, friendly to sexual liberation in almost every form, willing to blend Christianity with other faiths, and eager to downplay theology entirely in favor of secular political causes. Yet instead of attracting a younger, more open-minded demographic with these changes, the Episcopal Church’s dying has proceeded apace. … Practically every denomination—Methodist, Lutheran, Presbyterian—that has tried to adapt itself to contemporary liberal values has seen an Episcopal-style plunge in church attendance.

But the evidence suggests that it’s the lack of evolution on hot-button doctrinal issues that’s precisely what’s driving Catholics from the church. According to the 2007 Pew survey, “two-thirds of former Catholics who have become unaffiliated say they left the Catholic faith because they stopped believing in its teachings.” And the new poll found that the majority of Catholics leaving the church either become “nones”—which means they either identify as atheist/agnostic or say they have no religious affiliation—who are liberal-leaning on social issues; or join liberal Protestant denominations. Former Catholics are two and a half times more likely to become unaffiliated or a liberal Protestant than an Evangelical, which is presumably where Catholics would go if they thought the Catholic Church wasn’t conservative enough.

In fact, Catholic defection is the single greatest factor driving the much-heralded rise of the nones, who now account for just under 23 percent of the population. Almost one-third (28 percent) of nones are former Catholics, the single largest share of any religion. And in an irony that’s probably causing John Paul, the great promoter of orthodoxy as a bulwark against secularism, to turn in his grave, the share of nones in the country is now larger than the share of Catholics.

But what’s bad news for the church may be good news for the country. For years, the Catholic Church’s demographics—larger than any single Protestant denomination and located in key swing states in the Northeast and Ohio Valley—have given the U.S. Catholic bishops an outsize role in U.S. politics, which they use to espouse conservative positions diametrically opposed to those of the Catholic faithful. It was the Catholic bishops who single-handedly made coverage of abortion in the Affordable Care Act an issue that almost killed it and who ginned up the "religious liberty" meme to oppose both the contraception mandate and same-sex marriage—despite support of nearly two-thirds of Catholics on both issues.

But now, with their flock fleeing and Pope Francis espousing a more conciliatory form of Catholicism less focused on the pelvic zone, the U.S. bishops don’t look so powerful. And while it’s too early to tell if and how the emerging bloc of religiously unaffiliated voters will flex their political muscle, any group that represents nearly one-quarter of the electorate can’t be ignored. As Charles Blow notes, the unaffiliated are wildly underrepresented politically and if they

“are to make their presence felt in terms of more representation, it will most likely come on the Democratic side.”

In which case, Catholics will have literally voted with their feet, abandoning the religion of their birth to help create a new coalition of modern freethinkers and freelancers that can oppose many of the very policies their old leaders insist on clinging to and insist will be their salvation.

Patricia Miller is the author of “Good Catholics: The Battle Over Abortion in the Catholic Church.” Her work on politics, sex and religion has appeared in the Atlantic, the Nation, Huffington Post, RH Reality Check and Ms. Magazine. Follower her on Twitter @patti_miller.