Up all night in Mexico City: "Güeros," a gorgeous, ecstatic slacker odyssey, is one of the best movies of the year 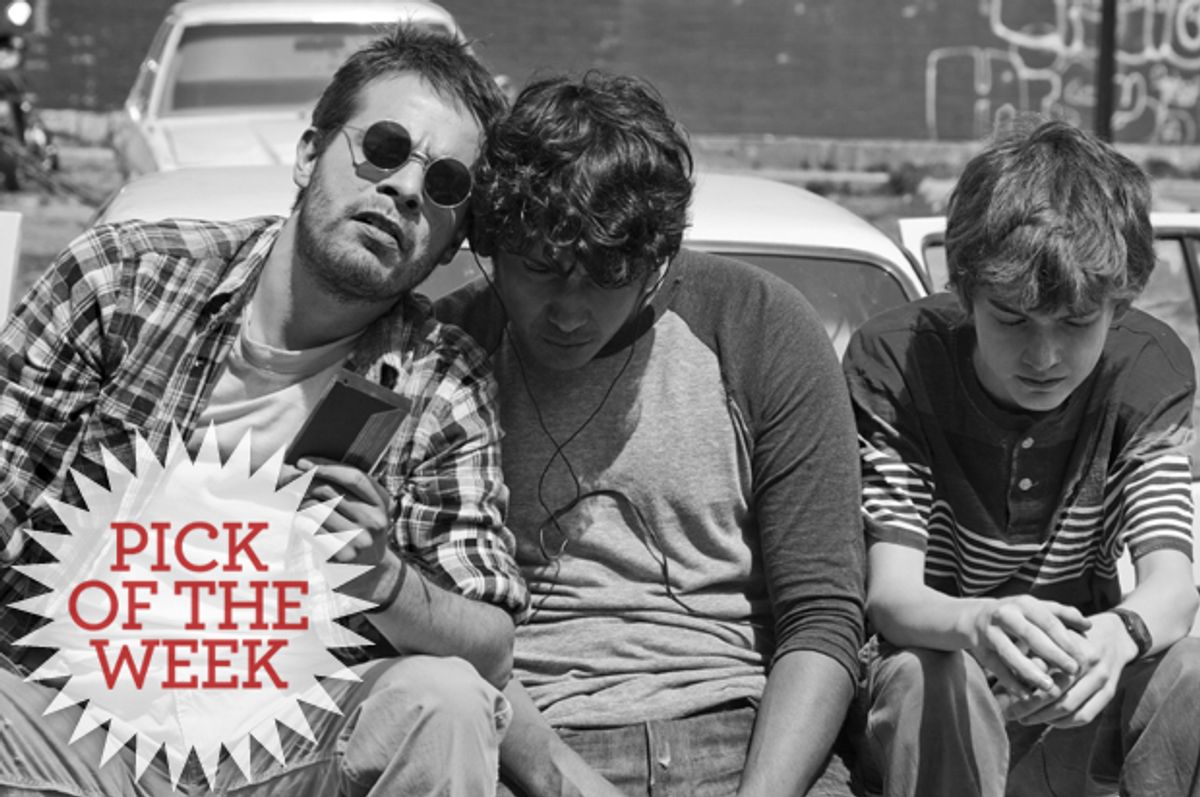 I had already decided that “Güeros,” a gorgeous slice of deadbeat Mexico City slacker poetry, was a work of genius even before the characters step out of the story (for the second time) to debate the movie with the director. These pretentious Mexican directors, one character complains (while sitting on a fancy terrace of a party he just crashed, drinking someone else’s booze), are painting an unfair picture of the country. Why do they want to make these arty movies in black-and-white featuring beggars and criminals? Then they go overseas to film festivals and convince French critics that Mexico is full of gangsters and hustlers and degenerates and phonies and corrupt politicians. But that’s all true, his friend observes. OK, the first guy admits, it is. But should they really get to make their movies on the taxpayers’ dime?

To be fair, “Güeros,” the whimsical, mysterious and subtly tragic debut feature from Mexican director Alonso Ruizpalacios, both is and is not the movie these guys are talking about. It is most certainly an art film, shot in black-and-white, that might well seem puzzling or pointless to many of Ruizpalacios’ fellow citizens (and to lots of other people besides). But it’s a story about dreamers, about deadbeats, about rebels without a cause, not about crime or poverty. “Güeros” is set in Mexico City during the 1999 student strike at UNAM, the gigantic national public university, and paints a highly specific romantic and satirical portrait of that time and place. Then again, it isn’t really about that at all – it’s a gorgeous sound-and-vision journey through a mystical or mythical space that has echoes of the 1960s Paris of Godard and Truffaut and the 1980s New York of Jim Jarmusch.

I don’t kid myself that this witty, delicate and often magical movie is likely to find a wide audience. But you don’t have to understand its points of reference in Mexican history and culture or speak Spanish or possess a dense mental thesaurus of art cinema in order to connect with it. If you have been young and felt disconnected from your surroundings, yet also felt the yearning for some ineffable meaning that lies behind it all but keeps slipping away, that’s plenty. “Güeros” is the foreign-language discovery of 2015 far, and pretty close to the best film I’ve seen all year.

The two guys who may be debating the merits of the movie they’re in are a dreamboat-handsome college dropout known as Sombra, which means “shadow” (Tenoch Huerta) and his best friend and roommate Santos (Leonardo Ortizgris). They are convincing and hilarious human characters and also archetypes of dissolution drawn from the history of pop culture. (They’d fit right in as the new Latino buddies in the household of Richard Linklater’s underappreciated “A Scanner Darkly,” for example.) Sombra and Santos have embarked on an odyssey, without quite intending to, in search of a dying Mexican rock hero who once made Bob Dylan cry. Their journey is both real and symbolic, and their story has elements of surrealism and postmodern self-referentiality, without ever quite abandoning everyday Mexican reality. (Which can get pretty weird.)

Ruizpalacios’ title is a derisive slang term applied to light-skinned Mexicans who betray European rather than mestizo or Indian ancestry, and the reference is so specific it has no English equivalent. “White boys” might be a rough cognate, but to call someone a güero is to imply softness and privilege, an upper-crust urban origin and a lack of real Mexican identity. Whether Santos and Sombra, and Sombra’s undeniably light-skinned little brother Tomás (Sebastián Aguirre), are in fact güeros is a point of unresolved controversy. As we eventually discover, “Los Güeros” is also the title of the only known album by the enigmatic Epigmenio Cruz, who may or may not have thrown his prospective ‘60s rock stardom away for a woman and may or may not have reduced Dylan to tears.

“Güeros” is full of those kinds of little echoes and resonances, but never in the service of some heavy-handed artistic agenda. If this is an ambitious movie it’s also a playful one devoted to capturing the wonder and mystery and loneliness of being young and adrift in a big city, and one that never loses sight of its central emotional drama. Back home in Veracruz, on Mexico’s Gulf Coast, Tomás has committed a minor act of juvenile delinquency – one that could have been disastrous and tragic, but wasn’t. That has convinced his mother to ship him off to Sombra (whose real name is Federico) in Mexico City, which could be construed as an all-time terrible parenting decision. Mom presumably doesn’t know that Sombra has fallen into a depressive philosophical funk that renders him a less than ideal caretaker. He has taken advantage of the UNAM strike to sit around and do nothing. He and Santos are “on strike from the strike,” as he puts it. They can only watch TV or keep their beer cold when they convince a young girl who lives downstairs to send up an extension cord in a basket. Why should they bother going out, Sombra muses, if they’re only going to end up coming back again?

For many Mexicans, especially those who came of age during that era, the ’99 UNAM strike looms in retrospect as an early battle against neoliberal economics, not to mention a signal defeat. (Believe it or not, the precipitating issue was the administration’s decision to start charging tuition – about $300 a year.) While the computers, the cars and the clothes are all roughly accurate, and Ruizpalacios’ portrayal of the hotheaded, self-absorbed and halfway appealing student radical movement is highly convincing, he also violates the period several times: We see upscale hipsters tapping on smartphones at the aforementioned party, and a few obvious eruptions of 21st-century architecture.

That kind of device could be irritating or affected in the wrong hands, but this is a movie where every movement of Damián García’s camera and every haunting snippet of music on the soundtrack – from vintage Mexican pop to Delta blues to Elvis singing “I Was the One” -- is part of a lovingly woven tapestry. It probably doesn’t help to compare one obscure film to another, but if “Güeros” bears many influences it reminds me most of Philippe Garrel’s 2005 “Regular Lovers,” an ironic and languorous ode to bohemian dissolution that both is and is not set against the Paris student uprising of 1968 (and is among the greatest and most overlooked works of recent French cinema). See them both, in whichever order you can.

When the characters listen to that legendary album by Epigmenio Cruz, on a cassette tape bequeathed by Sombra and Tomás’ late father, we hear only ambient sound around a cone of silence. It’s frustrating, but also perfect: What actual, audible music could possibly live up to the greatness of Epigmenio? Tomás’ near-tragic act of vandalism is echoed by another kid’s misdeed late in the film, one that nudges the story even closer to catastrophe but also toward unexpected discovery. Ana (Ilse Salas), the revolutionary firebrand of the student movement and Sombra’s on-and-off girlfriend, accompanies the three guys for a while on the great Epigmenio quest, and no words are required to explain the impression she makes on Tomás. This is a movie about the things that slip away from us – the girls or boys we loved, the musical heroes, the impossible political goals, the great romantic movies of other eras – and about the traces they leave behind.

“Güeros” is now playing at Film Forum in New York. It plays June 3 only in Santa Barbara, Calif., and opens June 19 in Montreal, June 26 in Denver and Coral Gables, Fla., and July 10 in Hartford, Conn., with other cities and home video to follow.