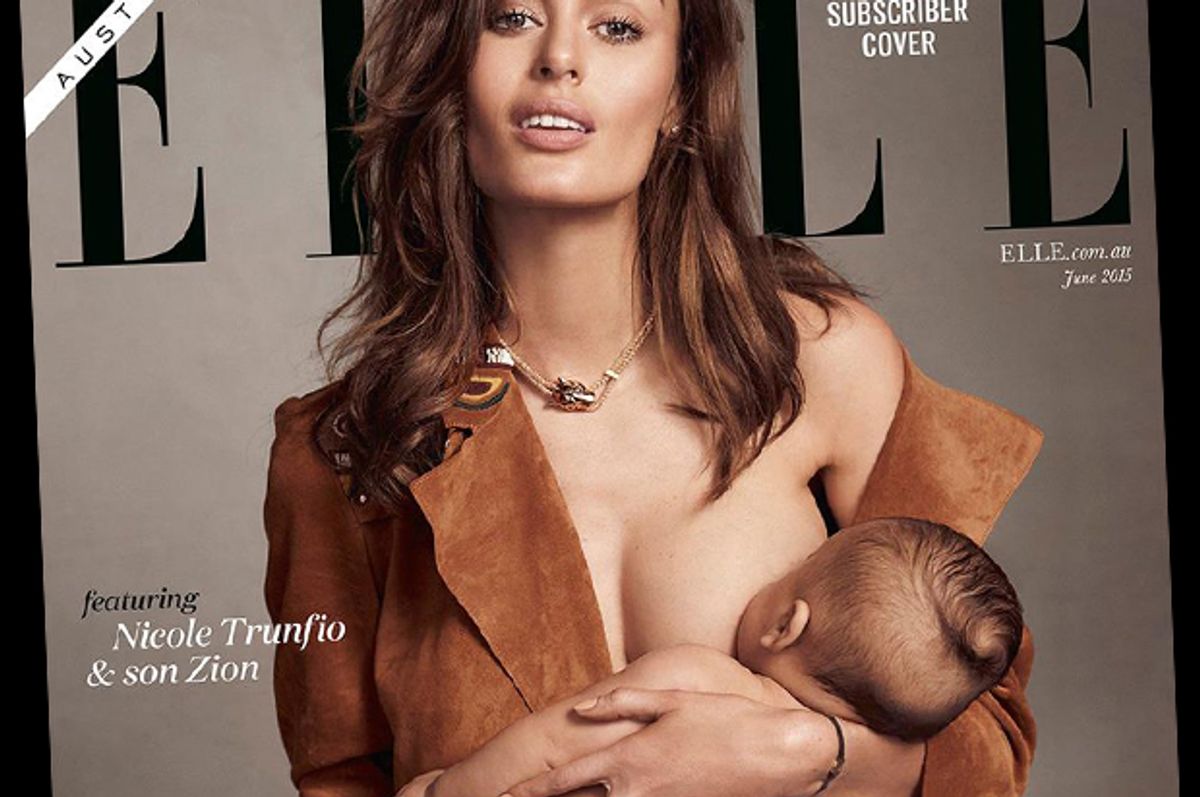 On the cover of the new June issue of Australian Elle, model Nicole Trunfio looks flawless in tousled hair, a suede Burberry coat, an engagement ring from fiancé Gary Clark Jr., — and her naked, four-month-old son Zion latched artfully at her breast. But that photograph is only for the issues Elle sends to subscribers — the newsstand copy features a more traditional, covered up image of Trunfio in a Prada dress with her sleeping baby facing outward. So is this, as the Daily Mail and other critics have been quick to harp, a case of Elle "refusing to sell controversial cover," or, as Elle's Australian editor-in-chief Justine Cullen explains, a "beautiful bonus" for subscribers?

On Elle's site, Cullen says that "This wasn’t a contrived situation: Zion needed a feed, Nicole gave it to him, and when we saw how beautiful they looked we simply moved her onto the set. It was a completely natural moment that resulted in a powerful picture." Well, natural in the sense that it's a photograph of a professionally beautiful person who got back in her bikini weeks ago, aided by hair and makeup artists and a skilled photographer.

The Gorgeous Woman Nursing Her Gorgeous Baby has become a hot editorial trope in recent years, joining the ranks of Nude and Hugely Pregnant and Flaunting That Post Baby Body in the endless cycle of simultaneously sanctifying and sexualizing motherhood. Miranda Kerr  opened the floodgates four years ago with a sweetly low-key image that ran in both People and OK! magazines. Then Gisele upped the ante two years ago with a self-deprecatory Instagram shot of herself "multitasking" at work — feeding her baby while a phalanx of stylists primped her. At the time, Jessica Grose wrote in the American version of Elle that "Celebrities post photographs like this as a way to humanize themselves to their fans. Stars, the Us Weekly cliché goes, they're just like us! They feed their children! But this particular photograph shows how absurd that fantasy is." Then last year, Olivia Wilde did an elaborate Patrick Demarchelier photo shoot for Glamour with infant son Otis that included an image of her nursing him in a Roberto Cavalli dress and Prada shoes. And she thanked the magazine "for knowing there’s nothing indecent about feeding a hungry baby" but also admitted that Otis had peed on the dress during the shoot. As that's why you don't wear Cavalli when you're breastfeeding, ladies.

Babies are not accessories, real-life nursing doesn't come with couture and putting nursing moms in fashion magazines can be both a sign of progress and a clever way to drum up attention at the same time. This week on Instagram, Trunfio posted her cover image with the message, "I'm so proud of this cover and for what it's stands for. I obviously don't look like this while I am breastfeeding but this stands for all women out there, whether you breastfeed or not, we gave birth, we are women, we are mothers. Thank you to Elle for being so bold and making such an encouraging, positive and healthy statement." It's not exactly realistic, but it still gets to an undeniable truth about breastfeeding nonetheless — that it's pretty damn beautiful.