With the news about the Duggars and Bill O’Reilly, it was a bad week for the holier-than-thou crowd 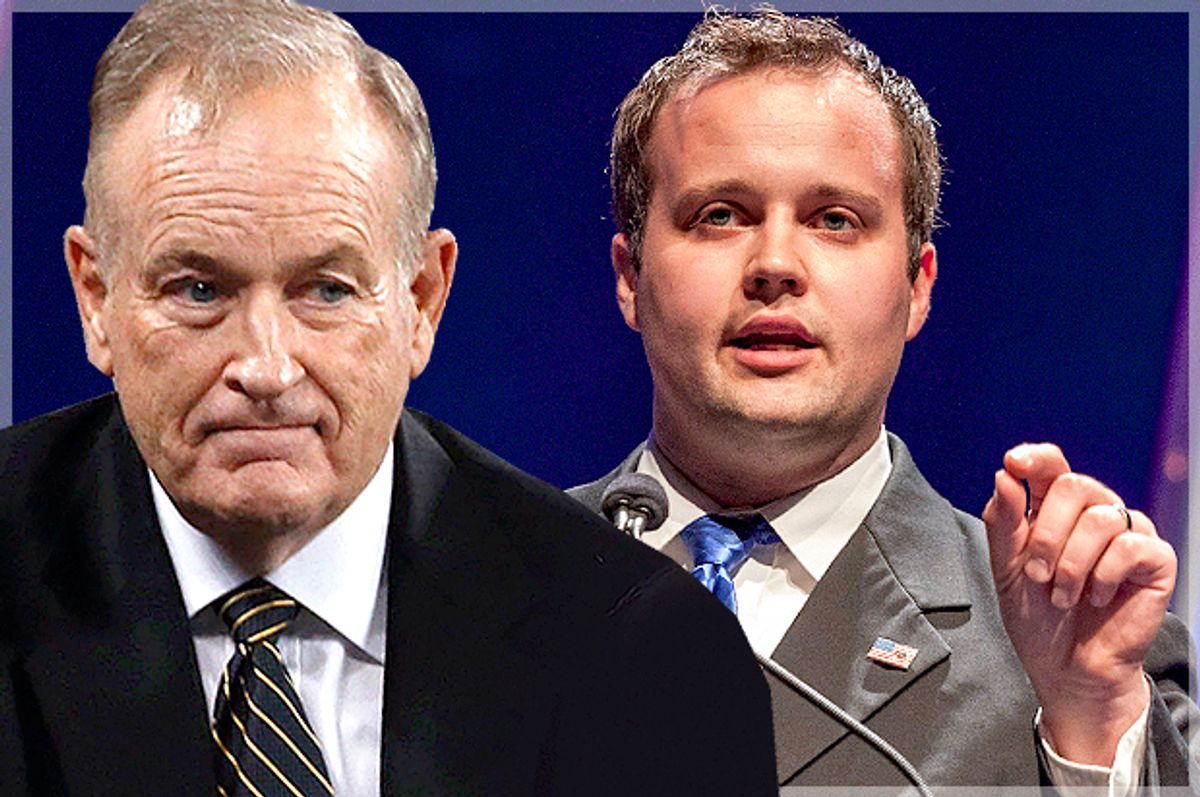 “19 and Counting” could be the name of a reality show on the 2016 GOP presidential field. (Poor Reince Priebus.) But it’s actually the name of that TLC show you never watch on the bewildering Duggar family, headed by Jim Bob and Michelle, who have 19 children (and counting?) because they claim that’s what God wants. There was always something off about them, but now comes news that oldest son Josh Duggar, executive director (until Thursday) of the Family Research Council’s political arm, sexually molested at least five young girls, including, it seems, his sisters, when he was a teenager.

As the details come out, it seems Jim Bob Duggar knew about his son’s abuse for at least a year, and tried to address the problem by taking him to talk to church elders, including a session with an Arkansas state trooper who later went to jail for child pornography. No, I’m not making this up. Then they sent him for “counseling” to a program that consisted of remodeling homes. When police investigated three years later, they wouldn’t let them talk to young Josh. No charges were brought against him.

We don’t know all the details of the wrongdoing of Josh Duggar, who was a minor at the time. We do have a lot of details about what his parents did, and it’s safe to say they handled the problem abysmally, for Josh and their daughters. By the way, it was observed on Twitter that the family’s sanctimonious statement mentions God six times, “daughters” none.

This comes on the heels of court transcripts revealing that bullying patriarch Bill O’Reilly, another purveyor of right-wing family values, used to return to his family and “go ballistic,” in his words, once dragging ex-wife down the stairs by the neck in front of his daughter. The daughter called his outbursts “scary and demeaning,” but also told a counselor she didn’t have much of a relationship with him because he was “never around.”

Of course, that didn’t stop O’Reilly from lecturing African Americans on how to raise their families, blaming black community troubles on “no supervision, kids with no fathers.” Now we know that instead of taking care of their own children, O’Reilly and the Duggars were out telling other people how to take care of theirs.

Or in the case of the Duggars and LGBT folks, telling them they couldn’t have any. With 19 biological kids of their own, the Duggars should have been way too tired for that level of homophobic activism, but they made time for it. And yes, a staple of their screechy preaching has been that LGBT people…wait for it…molest children.

Stellar mom Michelle Duggar made a robocall pushing the repeal of a local anti-discrimination ordinance, arguing that it would allow “child predators” to threaten “the safety and innocence of a child.” Maybe she had a guilty conscience.

Josh himself claimed anti-discrimination laws “protect one group of people over another” and make it hard to “protect the well-being of women and children in our cities.” (Think Progress has a handy guide to "9 times Josh lectured the world on family values before admitting he was a child molester." Enjoy.)

On the campaign trail in 2012, Duggar told reporters “Our family is like the epitome of conservative values. People connect to us in that way.” Much of the 2016 GOP presidential field has connected to Josh, at least, who seems to have a vanity photo with a most of the 19 (or so) and counting GOP presidential contenders. The entire Republican field is united on the inferiority of gay families, but hails parents like the Duggars, who let their son prey on his sisters for a year without going to authorities.

Meanwhile, Fox News remains silent about the behavior of O’Reilly, because his angry white patriarch shtick is the core of its brand. The NFL is now more sensitive to the concerns of women’s rights advocates than Fox is. It was a tough week for sanctimonious creeps, but it wasn’t so great for the rest of us, either.