David Foster Wallace vs. Jonathan Franzen: Finding truth and authenticity in an age of irony

If Franzen is our genius realist, and DFW our genius postmodernist -- how might they meld irony and sincerity? 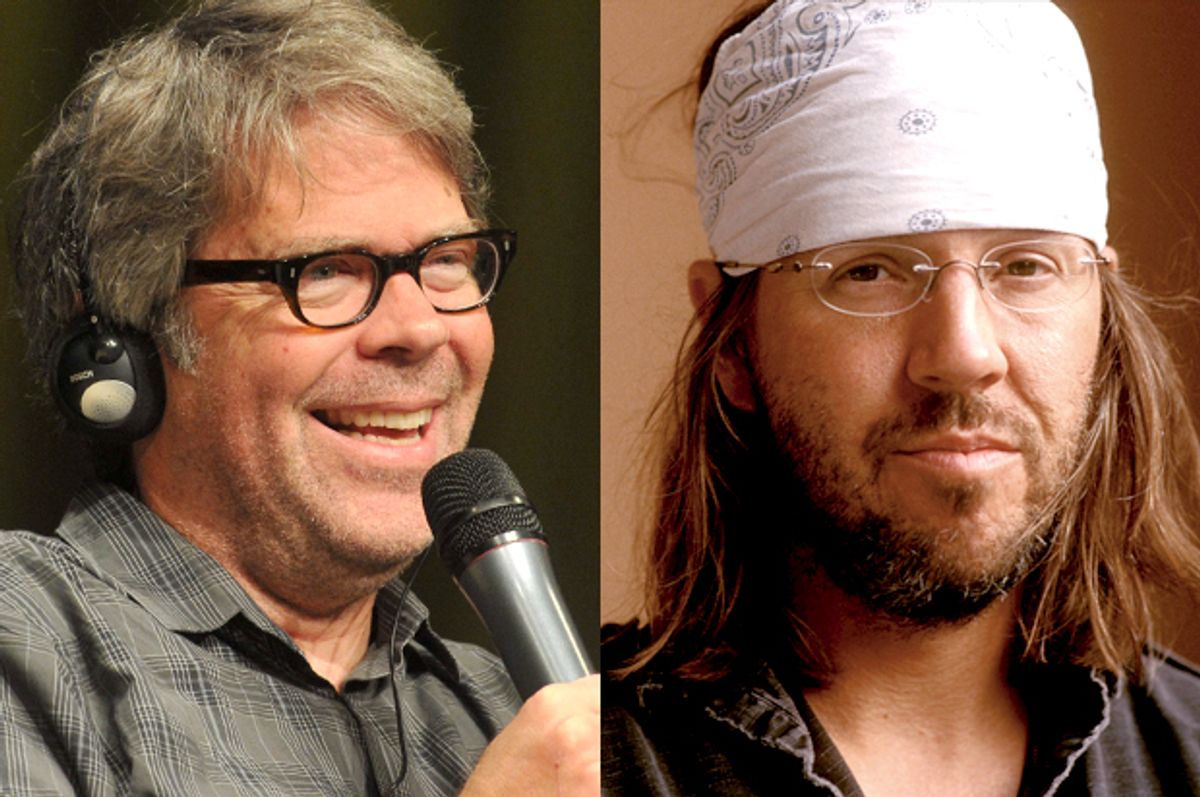 Excerpted from "KEEP IT FAKE: Inventing an Authentic Life"

When you’re not ready enough, old-fashioned realism reigns. You assume that what you see is what you get and believe that the artist, yourself, and everyone else should mimic the given. But when you’re too ready, irony simply for the sake of irony dominates, endless reflection upon reflection upon reflection, no end in sight, and artists—ourselves—merely enter into states of “n+1–ness,” exhausting themselves into po-mo-nihilistico apathy. If you can doubt everything, why bother doing anything?

Our most famous and accomplished realist is Jonathan Franzen, composing his Dickens-like tomes—"The Corrections," "Freedom"—on recognizable, “everyday” characters negotiating current cultural forces. He favors the third-person omniscient narrator, the eye in the sky, objectively recording earthlings’ goings-on. And our most well-known and brilliant postmodernist would be David Foster Wallace himself, whose thousand-page "Infinite Jest" combines a multitude of styles, voices, and genres, many of which receive highly self-aware commentary in a lengthy section of footnotes. You walk away from Franzen thinking, “There’s a world and it’s serious,” while you stagger from Wallace, spinning dizzily in the thought “There are only words, words, words, around the void whirling, and nothing to do, if you even want to sniff something resembling reality, but show that you know this.”

Wallace couldn’t return to conventional realism, though, suspecting it to be the most banal and uninteresting of shams. So, he wondered, what kind of sincerity could be ironic and earnest at the same time? He described the shape such authenticity might take in his famous Kenyon College commencement address, from 2005, titled “This Is Water”: to be truly educated, he claims, “means being conscious and aware enough to choose what you pay attention to and to choose how you construct meaning from experience.”

If you’re aware enough to give yourself a choice, you can choose to look differently at this fat, dead-eyed, over-made-up lady who just screamed at her kid in the checkout line. Maybe she’s not usually like this. Maybe she’s been up three straight nights holding the hand of a husband who is dying of bone cancer. Or maybe this very lady is the low-wage clerk at the motor vehicle department, who just yesterday helped your spouse resolve a horrific, infuriating, red-tape problem through some small act of bureaucratic kindness. Of course, none of this is likely, but it’s also not impossible. It just depends what you want to consider. If you’re automatically sure that you know what reality is, and you are operating on your default setting, then you, like me, probably won’t consider possibilities that aren’t annoying and miserable. But if you really learn how to pay attention, then you will know there are other options. It will actually be within your power to experience a crowded, hot, slow, consumer-hell type situation as not only meaningful, but sacred, on fire with the same force that made the stars: love, fellowship, the mystical oneness of all things deep down.

Then the ever-reflective, and humble and self-effacing Wallace admits, “not that that mystical stuff is necessarily true.” But what is true, “capital-T True,” is “that you get to decide how you’re gonna try to see it.”

Call this aesthetic pragmatism. Call it Romantic irony. Call it the new sincerity (apparently a movement). Or perhaps term it, after reading a fine scholarly article by Timotheus Vermeulen and Robin van den Akker, metamodernism. It, whatever this is, results in transforming the woman in the checkout from boringly annoying to resplendent saint (or the game of cricket, played by the ocean, into redemption, or the stark winter light into a revelation of melancholy’s meaning). In each case the artist—and we all are artists, good, bad, or ugly—expands the ordinary into the extraordinary or condenses the extraordinary into the common. He, she, enchants the cosmos.

Real magic: believing is seeing; seeing, acting. Wallace imaginatively transubstantiates the checkout woman into a paragon of compassion wearied into consternation. Is that enough? It is something, sublime, a reorientation that turns annoyance or resignation or boredom into almost mystical community. But more, the sweet, inexhaustible more, would be: Wallace says to the harried woman, a kind thing—even if it’s a cliché, a lie, like chuckling bright-facedly, “Those kids of yours are sure spirited,” or, in a soft voice, saying, “Looks like you’ve got your hands full.” These lines might relieve the woman’s burden for just a second, recall her to better moments. Who knows? Such lines, though, could just as easily make the situation worse, might irritate the woman more, coming across as intrusive or just as annoying as the little ones.

This sounds like stupid stuff, the mundane made moral. It probably is, but sometimes these little niceties, for all their shallowness, can make all the difference. Like the day I went into a New York deli, hungover, depressed, lonely, hungry, nonlabyrinthine as Jedediah Purdy (who I bet is a light drinker), having little money in my pocket, and the guy making my sandwich—turkey and provolone on white—said to me, so gently, as he was finishing up, “You wanna a little bacon?” and when I said no, knowing the extra cost for this, he continued, “Okay, but I got it here, might as well throw it on there, no charge,” and I nodded okay, and then he laid those perfectly fried strips on the sandwich as if they were sacred wafers, and as he completed the meal and wrapped it snugly in paper and then handed it to me, smiling, I really did feel better—less alone, more hopeful—since in this cruel universe a person can be merciful, giving a stranger a boon whether the stranger deserves it or not—deserving in fact being beyond, entirely, the question—for that’s what mercy, earth’s greatest fiction, is: treating someone “as if” he were worthy, and rewarding him, when in fact that person, like all of us, is inwardly criminal or on the outside. Who should ’scape whipping, Grim Dane?

God’s bodykins, this is stupid stuff. Yes. We would—I would—feel more hopeful if Wallace’s metamorphosing imagination had generated not just his own inner calm or a kind passing word for a tired woman managing two howling brats but also a more lasting change: Wallace, sensitive to suffering and aware of his special power to ameliorate it, becoming more affectionate and understanding to those he loves or offering to volunteer (as Wallace, bless him, did) to help others, the homeless, the impoverished, maybe stray cats and dogs. (Apparently Wallace at one point, when his writing was coming hard, thought he might run an animal shelter for a living.) And surely such profound, lovely transformations occur all the time, short-term or long, and are certainly more substantial by far than the ten-second faux social chitchat at the checkout, however kindly intended.

Mock me for being sentimental, with my little Dickensian tales of charity’s unexpected birth and prospering. But, as Wallace says, sometimes those clichés by which we attenuate existence’s depths into tepid dishwater can, if we take them seriously for just a second—bad taste to go on too long—bloom from the banal into the beautiful: take it one day at a time; the longest journey begins with a single step; be here now; fake it till you make it. To imagine these flattenings of life’s complexities as pragmatic directions expands them into intricate maps to the heroic: character, fortitude, creativity, flexibility, grace.

Excerpted from "KEEP IT FAKE: Inventing an Authentic Life" by Eric G. Wilson, published by Sarah Crichton Books, an imprint of Farrar, Straus and Giroux, LLC. Copyright © 2015 by Eric G. Wilson. Reprinted with permission of the publisher. All rights reserved.

Eric G. Wilson is the Thomas H. Pritchard Professor of English at Wake Forest University in Winston-Salem, North Carolina. He is the author of "Against Happiness: In Praise of Melancholy," "The Mercy of Eternity: A Memoir of Depression and Grace," and five books on the relationship between literature and psychology.