Our dogs can read our minds: The new neuroscience of animal brains and understanding

Understanding emotion in others is basic to survival, grounded in evolution. Animals have the skill just as we do 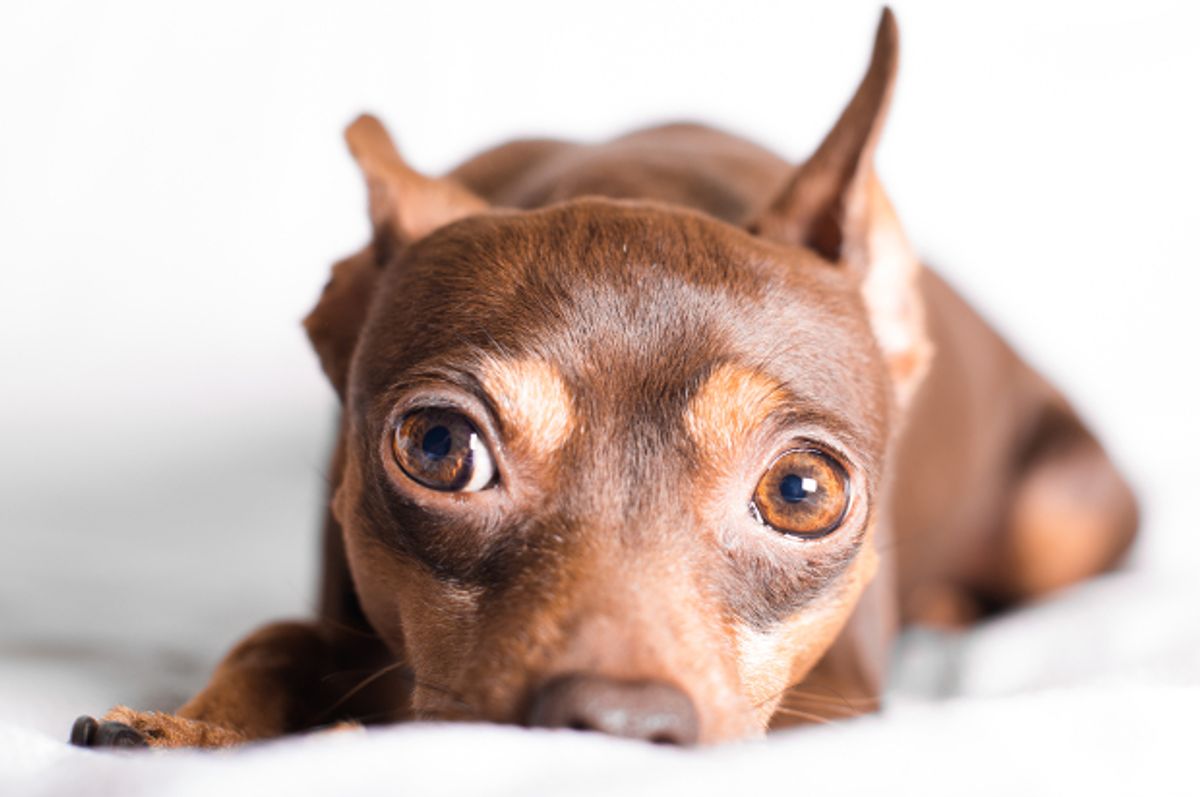 Excerpted from "The Wandering Mind: What The Brain Does When You're Not Looking"

In the quest to identify what might be unique to the human mind, one might well ask whether non-human animals have a theory of mind. In fiction, perhaps, they do. Eeyore, the morose donkey in Winnie-the-Pooh, at one point complains: ‘A little consideration, a little thought for others, makes all the difference.’ In real life, some animals do seem to show empathy toward others in distress. The primatologist Frans de Waal photographed a juvenile chimpanzee placing a consoling arm around an adult chimpanzee in distress after losing a fight, but suggests that monkeys do not do this. However, one study shows that monkeys won’t pull a chain to receive food if doing so causes a painful stimulus to be delivered to another monkey, evidently understanding that it will cause distress. Even mice, according to another study, react more intensely to pain if they perceive other mice in pain. It is often claimed that dogs show empathy toward their human owners, whereas cats do not. Cats don’t empathise—they exploit.

Understanding what others are thinking, or what they believe, can be complicated, but perceiving emotion in others is much more basic to survival, and no doubt has ancient roots in evolution. Different emotions usually give different outward signs. In Shakespeare’s "Henry V," the King recognises the signs of rage, urging his troops to

. . . imitate the action of the tiger;
Stiffen the sinews, summon up the blood,
Disguise fair nature with hard-favour’d rage;
Then lend the eye a terrible aspect . . .

The human enemy will read the emotion of Henry’s troops, just as the antelope will read the emotion of the marauding tiger. Perhaps the best treatise on the outward signs of emotion is Charles Darwin’s "The Expression of the Emotions in Man and Animals," which details the way fear and anger are expressed in cats and dogs, although he does not neglect the positive emotions:

Under a transport of Joy or of vivid Pleasure, there is a strong tendency to various purposeless movements, and to the utterance of various sounds. We see this in our young children, in their loud laughter, clapping of hands, and jumping for joy; in the bounding and barking of a dog when going out to walk with his master; and in the frisking of a horse when turned out into an open field.

We might well wonder, though, whether animals do go beyond reading the expressions of emotions, and understand what others are thinking. A good deal of attention has been directed to chimpanzees, our closest non-human relatives. It seems fairly clear that chimps have some understanding of what another chimp can or cannot see. In one study, a chimpanzee approached food when a more dominant chimpanzee could not see it, but was reluctant to do so when the dominant one could see it. Again, a subordinate chimpanzee retrieved hidden food if a dominant chimpanzee was not watching while the food was being hidden, or if the food was moved to another location while the dominant chimp wasn’t watching. The subordinate also retrieved food if a dominant chimp watched it being hidden, but was then replaced by another dominant chimp who hadn’t watched, suggesting the subordinate could keep track of who knew what.

These are examples of tactical deception. Deception itself is widespread in nature, whether in the camouflage of a butterfly wing or the uncanny ability of the Australian lyrebird to imitate the sounds of other species—including, it is said, the sound of a beer can being opened. Tactical deception, though, is that in which the deception is based on an understanding of what the deceived animal is actually thinking, or what it can see. Two psychologists from St Andrews University in Scotland, Andrew Whiten and Richard Byrne, once put out a general call to researchers studying primates in field settings for anecdotes demonstrating tactical deception. They screened the reports to rule out cases in which the animals might have learned to deceive through trial and error, and concluded that only the four species of ape occasionally deceived on the basis of an understanding of what the deceived animal could see or know. Even so, there were relatively few instances. Chimpanzees were alone in meeting nine of thirteen different classes of deception, whereas gorillas met only two. Perhaps our primate cousins are exceptionally cooperative and trusting, or their capacity for theory of mind is limited compared with the human predilection for deception, from petty lies to downright fraud.

In 1978, psychologists David Premack and Guy Woodruff wrote a classic article with the beguiling title ‘Does the chimpanzee have a theory of mind?’ This led to a good deal of research, but the issue is still not entirely settled—it seems that we humans, even the experts, are quite good at reading the minds of other humans, but not so good at reading the mind of the chimpanzee. Nevertheless, two of the experts in the field, Josep Call and Michael Tomasello, concluded that 30 years of research had shown chimpanzees to have an understanding of the goals, intentions, perceptions and knowledge of other individuals, but no understanding of their beliefs or desires. No one has yet convincingly shown that chimpanzees can attribute a false belief to another chimp.

However, the champions of mind-reading among animals are probably not chimpanzees, but our best friends. Dogs seem to have an almost uncanny knack of understanding what’s going on in the minds of human beings. They readily understand pointing. For instance, if two containers are placed in front of a dog, and a person points to the one that contains food, a dog will understand that the gesture of pointing is designed to indicate the food. The food is hidden from the dog ’s view, and experiments show that the choice is not based on smell. They will also go for the food if the person points to a container behind them. They will even choose the correct container if a person simply marks it by placing some object on top of it. Puppies without much human experience act in the same way. Chimpanzees, in contrast, are much worse at such tasks.

Dogs are descended from wolves, and wolves do not respond in the same way. The key to mind-reading in dogs is domestication. Surprisingly, though, the domestication of dogs seems not to have been driven by humans, at least initially. Brian Hare, who despite his name likes to be known as the ‘dog guy’, suggests that dogs evolved from packs of wolves who scavenged from the rubbish left by humans, and those most likely to survive were those who were least afraid of human contact, and became comfortable in the presence of humans. In Hare’s words, it was ‘survival of the friendliest’. At some point, though, humans seem to have capitalised on the friendliness of the dogs and embarked on further selective breeding, to produce the extraordinary variety of dogs we see today. (My favorite? The Nova Scotia duck tolling retriever, bred to wag its tail to attract ducks, luring them close to hunters.) Some of them have been bred back to a condition of unfriendliness, serving as guards ready to attack intruders. ‘Cave canem’, as they used to warn in Rome. Occasionally, we read of savage attacks on people by dogs, often followed by threats to have such breeds exterminated, but most dogs are wonderfully friendly and faithful, and experts at reading the human mind.

Another species to have become domesticated independently of human influence is the bonobo, close cousin of the chimpanzee, and sharing with the chimp the honour of being our closest non-human relative. In personality, though, chimps and bonobos are opposite. Chimpanzees are aggressive and competitive, with males often attacking females and the young, while bonobos are friendly, caring and sharing, and use sex rather than fighting to resolve conflicts. Sadly, they were almost exterminated in the Congo Basin in the bushmeat trade, until a sanctuary called Lola ya Bonobo, meaning Paradise of the Bonobos, was established. Curiously, increased domestication seems to be accompanied by a decrease in brain size. Dogs have smaller brains than wolves of equivalent body size, and bonobos have smaller brains than chimps. And we humans have slightly smaller brains than the now extinct Neanderthals, our closest non-living relatives. So beware of men with big heads, and take comfort from Oliver Goldsmith’s poem ‘The Village Schoolmaster’:

And still they gazed, and still the wonder grew,
That one small head could carry all he knew.

The fundamental question that haunts research on the animal mind is whether there is a discontinuity between ourselves and other species. Much of religious teaching is built on the premise that we humans are indeed on a different plane, closer to angels than apes, even if our sins have caused us to fall a little lower. René Descartes, too, argued that humans are unique through the possession of a non-material mind, whereas animals are mere machines. Opposed to that, of course, is the Darwinian mantra I quoted in the previous chapter: ‘The difference in mind between man and the higher animals, great as it is, certainly is one of degree and not of kind.’ My guess is that there is indeed a continuity between ourselves and other primates, at least in our ability to understand what’s going on in the minds of others, but with greater complexity in our own species. Indeed, as I illustrated earlier, we humans seem able to take that ability to depths of recursion well beyond that evident in chimpanzee society. This may well have been driven by increasing loops of deception, the product of the so-called Machiavellian mind—as Machiavelli himself put it in The Prince: ‘It is double pleasure to deceive the deceiver.’ The spiral of deception and intrigue has been cynically described by Nicholas Humphrey as a ‘self-winding watch to increase the general intellectual standing of the species’.

Whether to deceive or inform, we humans seem to delight in making mental journeys into the minds of others, and indeed create fictional characters for the purpose. Young children, especially in the preschool years, often create imaginary companions, invisible friends with whom they share confidences. Together with the ability to travel mentally in time, travelling mentally into the minds of others provides the platform for one characteristic that does seem to be distinctively and universally human—storytelling.

Michael Corballis is professor emeritus of psychology at the University of Auckland, New Zealand, and the author of many books, including A Very Short Tour of the Mind: 21 Short Walks around the Human Brain.