"Game of Thrones" politics: "All rulers are butchers — or meat" 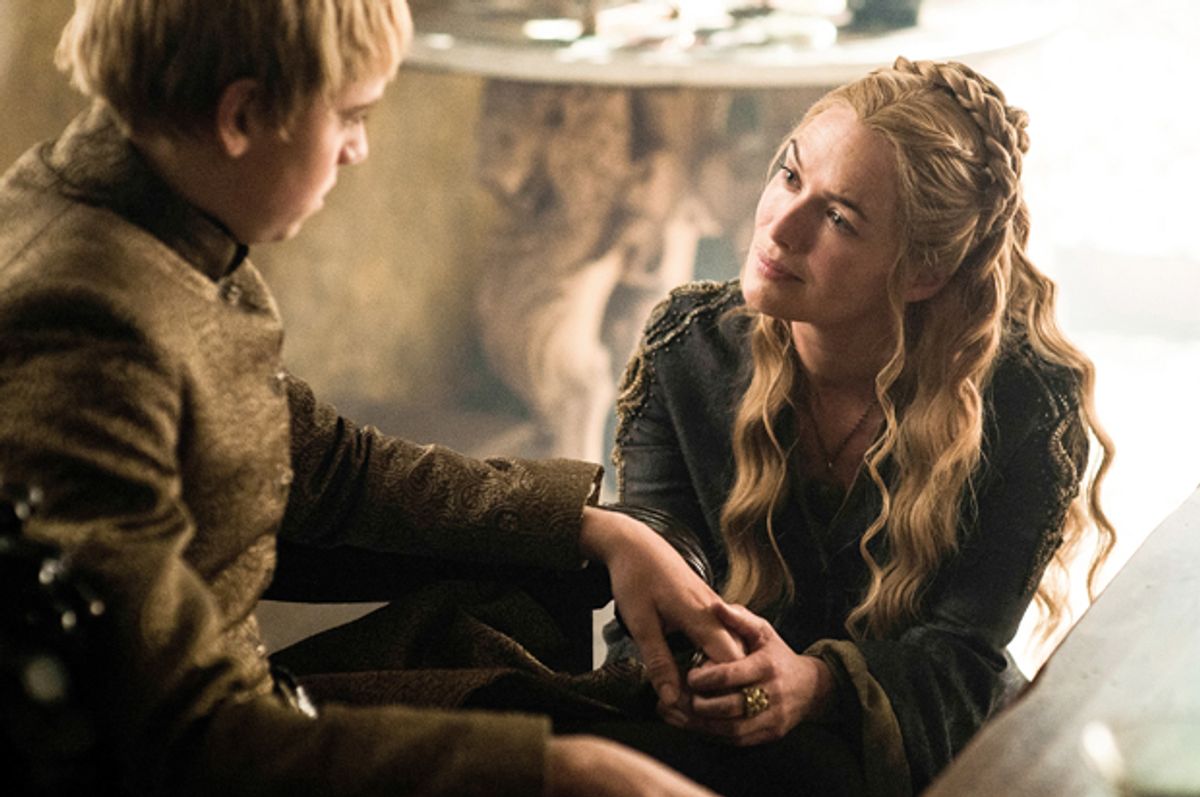 Dean-Charles Chapman and Lena Headey in "Game of Thrones" (HBO)
--

Season 5 of Game of Thrones has been an exceptionally slow burn, especially in comparison to the previous season, where Joffrey was dead by the end of the second episode. However, we’re finally starting to see momentum gathering, as the characters are being pushed to the brink as we find out what they are willing to sacrifice to achieve victory, and whether the gods will view those sacrifices favorably.

In Meereen, Jorah Mormont is willing to murder a half-dozen men with barely a second glance to once again stand before his queen, only to find himself once more a prisoner when Queen Daenerys doesn’t react favorably to her prodigal knight. The queen, meanwhile, has sacrificed her hand in marriage, if not her sexual independence, in the hope of uniting all those within the walls of Meereen. Daario Naharis, her erstwhile lover (who wouldn’t mind the idea of becoming her third husband) thinks that Dany should use the occasion of the opening of the fighting pits to execute all the masters, and indeed raises the question of whether Hizdahr zo Loraq, future King Consort of Meereen, is in fact the leader of the Sons of the Harpy who have mysteriously ceased their campaign of terrorism. Dany herself refuses to countenance this political butchery, but Daario argues that “all rulers are butchers or meat.”

The problem with Dany’s decision to sacrifice her hand and the fighting pits in return for peace is that it only changes the nature of who is being sacrificed. Daenerys may think that she is the one who “has sacrificed for your tradition,” but she’s not the one bleeding in the pit. Far from being free men as Hizdahr had promised, Jorah and Tyrion are clearly slaves, bought at auction and saved from an ugly death in the sands only by the Mormont knight’s skill at arms. Gradually, quietly, slavery is returning to the free city of Meereen, and it is the freedmen who will suffer for it.

At the very other side of the known world, another ruler is being made to choose between his deepest desires and the most painful sacrifice imaginable. For all that Stannis is the better general, for all that his army is bigger than that of the Boltons, the Northern winter that we’ve been waiting for five seasons may be his undoing. His horses are dying, his food is running out, and his mercenaries are gradually abandoning him. Stannis insists that, with winter coming, he must march forward into “victory or death,” or else be trapped on the Wall.

Yet for all that he wants to march, the winter storms are holding him back, just as the winds at Aulis held back the Achaean fleet that was waiting to sail to Troy. Just like the High King Agamemnon, Stannis is now faced with a choice between the will of the gods and his daughter’s life, the life he fought so hard to preserve when she was struck down by greyscale. Melisandre has seen herself walking the walls of Winterfell and the Bolton banner falling, but she has also been wrong before when she prophesied Stannis’ victory at the Battle of the Blackwater. She claims that the power of king’s blood held in Shireen’s veins will lead Stannis to victory, and reminds him of the three leaches which he cast into the fire that seem to have struck down two kings...but Balon Greyjoy still lives. From that evidence, we might say that Melisandre is a fraud and a crank – and yet, we have the evidence of Renly’s death and the rebirth of Beric Dondarrion to remind us that R’hllor really does have power in this world.

And that’s something of the sticking point: In our own world, we view the idea that a king might sacrifice his daughter because the gods demand it as abhorrent, in no small part because we don’t believe the sacrifices work. But in a world where we know that there really is going to be an apocalyptic conflict between the living and the dead, where the gods might actually answer prayers in the form of fiery miracles, it becomes a very different question. Once before, Stannis stood on this precipice, when it came to the question of whether Gendry Waters’ life was worth that of the entire kingdom. But now Davos cannot forestall that decision by putting Shireen on a boat.

And at last, Cersei has sacrificed everything to gain a momentary victory as she stands over an imprisoned Margaery offering the same table scraps that the two women feuded over at the Purple Wedding. Behind every line in her conciliatory speech with her son – trying to soothe his despair and helplessness by telling him “don’t blame yourself for fate,” telling him that “I would do anything for you, I would burn cities to the ground,” – we can see the power of Maggy the Frog’s prophecy. Genuinely believing that Margaery Tyrell is the mortal enemy foretold in her prophecy, Cersei has rendered the crown helpless to protect its own, as she finds out herself when she’s thrown into the dungeons, right next to her daughter-in-law.

For Cersei’s problem is that Cersei always thinks that she’s the only one willing to sacrifice to achieve their ends. In this episode, Olenna offers bribery and threatens a grain embargo to get what she wants from the High Sparrow, and when that doesn’t work, she blackmails Littlefinger with the prospect of exposing him as the architect of the Purple Wedding, and thus a kingslayer and traitor, into handing over Olyvar who is the Faith’s only evidence against Margaery and Loras. For his part, Littlefinger is perfectly happy to sacrifice his last surviving prostitute in order to preserve his ties with the Tyrells (and coincidentally thwarting the Faith who ransacked his brothels, another neat example of killing two birds with one stone).

Unfortunately for Cersei, Lancel of the Faith Militant is firmly in the control of the High Sparrow, who shows himself willing to countenance any sacrifice in the name of the Seven. Even the normally perspicacious Olenna fails to completely understand the man, because like so many other players in the "Game of Thrones," she thinks he’s got a hidden agenda, that his zealotry must be a cover for some “hidden motive.” But as he reveals, all he has is a “simple truth: the gods demand justice… for all of us, high and low.” He is happy enough to tear down the Tyrell’s pride for Queen Cersei, but equally happy to tear down the Lannisters as well, who he sees as all part of the same corrupt noble elite. Indeed, in the name of the many against the few, the High Sparrow is willing to pull the very Sept of Baelor down, strip it (and by extension, all of Westeros) to the foundations to bring back purity.

The High Sparrow has known from the beginning what Cersei has done, has always intended that her reign as queen should end with her thrown into the dungeons accused of adultery, incest, and kingslaying. But he has patiently waited for Cersei to give him every weapon, both judicial and military that he has now turned against her. And now there is nothing left of the royal government in King’s Landing, no authority but that of the Seven. This is the power of sacrifice.