In an hour that considers the subtle (and not-so-subtle) bondage of family, an unexpected encounter steals the show 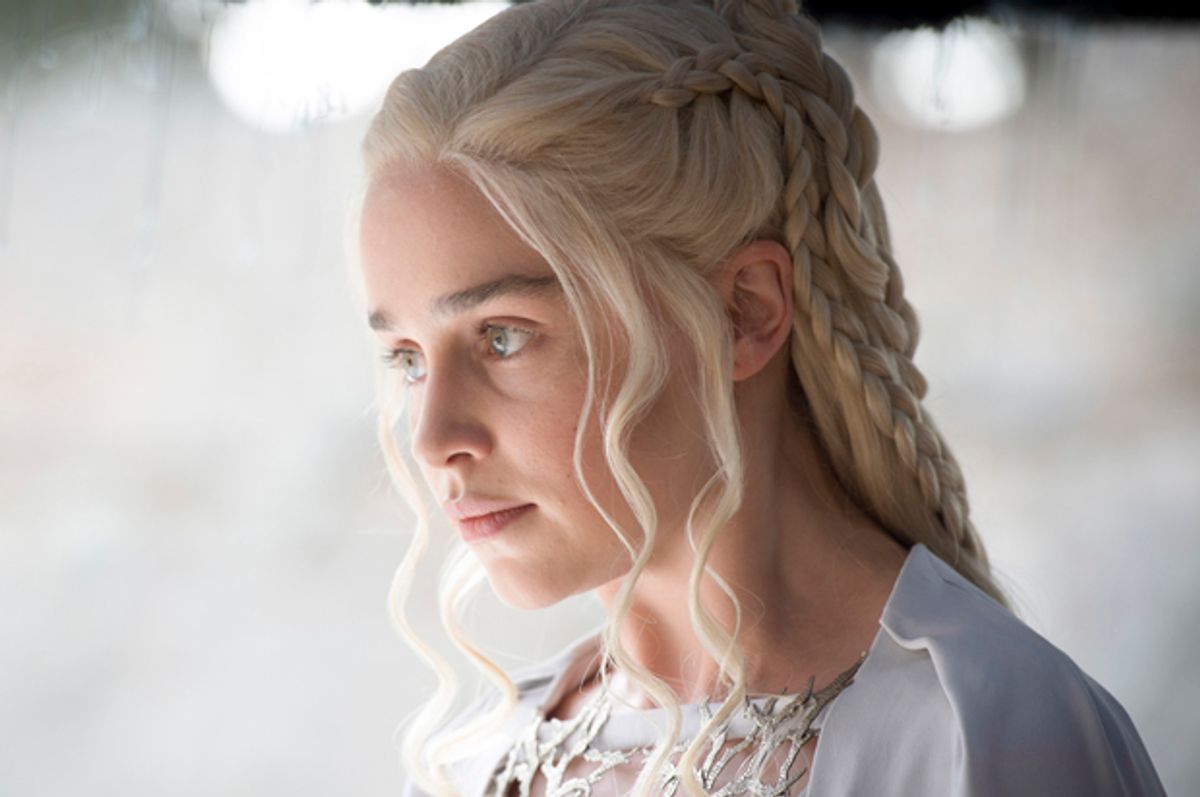 In case it was lost on anyone after watching “The Gift,” “Game of Thrones” would like to reiterate that often times, people feel imprisoned within their lives (and lies.) No less than 10 characters are imprisoned in some way, shape, or form within the episode’s hour and that doesn’t even take into consideration the metaphorical chains worn by the vast majority of the universe’s inhabitants. So what, precisely, has everyone in the greater Westeros region feeling so bound up?

As Freudian as it may sound, their parents.

Even when not directly involved in an individual’s life, parents cast a long shadow in any universe centered on a system that includes so much in the way of lines of succession, family crests, and, well, incest. Time and again throughout “The Gift,” we see individuals forced to a point where they must choose to abide by the standards set by their parents or make their own path. It’s not something that’s gone unexamined by the show before, (a theme perhaps best explored in this piece that suggests the only way for the remaining Stark children to survive the series is to stop being Starks) but “The Gift” showed a renewed commitment to the question, with father figures passing on and actual fathers forced to choose whether or not to sacrifice their children for their own glory.

The episode begins at the Wall, with Jon taking off with the wildlings to meet up with more of their brethren and leaving Castle Black under the rule of First Ranger Thorne. Jon’s choice to become Lord Commander of the Night’s watch and eschew the opportunity to become a Stark both bears out his father’s wishes by abiding by his oath to the Night’s Watch, the honorable thing to do, particularly by Ned Stark standards, while also cutting himself off fully from the family he knew as his own. Meanwhile, Sam loses his father figure in Maester Aemon and is almost immediately forced to defend Gilly from lecherous members of the Watch. In the aftermath, Sam breaks his vow of celibacy as he and Gilly consummate their relationship.

In less pleasant consummations, Sansa is imprisoned in a tower in Winterfell, spending her days weeping and her nights being raped, leaving her so desperate that she begs Theon to help her, by placing a candle in the broken tower to signal the North of her distress. She appeals to him, not as Reek, the broken down toy of a sadist, but as Theon Greyjoy, the last surviving son of Balon Greyjoy. Theon, being a useless sack of shit, takes her faith in him and craps it all out on Ramsay’s floor, giving him both Sansa’s candle as well as her intentions with regards to her escape. In retribution, Ramsay flays the nice old woman from last episode and lets his wife admire his handiwork. On the bright side, Sansa returns from their ambulation with a handheld weapon she manages to secret into her skirts, so maybe she can do everyone a favor and bury it in someone’s brain before the season ends. The most curious factor of Sansa’s storyline, a repurposed plot that in the books involved a character named Jeyne Pool posing as Arya Stark and being married off to Ramsay, is the idea that it’s the Stark name and the fate that befalls Sansa that would drive the North to rise up and protect her. She is being punished because her name has value, her father’s honor had value, and that value can still be exploited.

(In case you were hoping for Brienne to sweep in and rescue Sansa, we briefly see the former standing watch outside of Winterfell staring intently at the broken tower, willing a candle to appear and anxiously awaiting episode nine, which I assume is around the time Brienne will actually be allowed to do something again.)

Stannis is another character who’s having trouble getting anything going, as his troops seem to be faltering under what would be considered Massachusetts’ mildest winter ever, which leads Davos to suggest they give up and return to Castle Black. However, winter in Westeros lasts for years, as Stannis reminds Davos, and this is as good a chance as they’ll ever have to take Winterfell. Davos slinks off with his tail between his legs and Melisandre suggests that they could probably move things along if Stannis would just let her sacrifice his daughter to the Lord of Light (which, honestly, feels like Melisandre’s solution for everything). But Stannis, as evidenced in the last few episodes, is a loyal father to Shireen and rebuffs the Red Woman, sending her away and leaving him alone with his thoughts and contemplating the fight to come.

But, as likely comes as no surprise given the recent loss of their patriarch, no family struggles as mightily in the shadow of their father as the Lannister clan. In Dorne, Jaime fruitlessly tries to persuade Myrcella to return home with him, advising her that it’s her mother’s will. But Myrcella is young and in love and has no qualms about refusing her “Uncle Jaime’s” wishes. As far as she’s concerned, her mother traded her like chattel to Dorne and now that she’s happy, wants her to abandon her happiness and return to King’s Landing, merely because she bids it. In this moment, Jaime yearns for the authority that a father has over his child, that Tywin never shied away from using with his own children, but serving merely as Uncle and messenger, he has no such sway over Myrcella, a realization that leaves him wanting.

As for Tyrion, his travels with Jorah finally come to an end when the pair are sold to a man interested in slaves for the fighting pits at Meereen. When Jorah realizes that winning means an audience with the queen, he rushes into the battle and lays waste to the competition before revealing his visage to Dany. Unmoved, Dany tries to dismiss him, only to have Tyrion present himself as the eponymous gift and finally bring two of the show’s finest characters into contact. It’s curious how far Tyrion has come from the man we saw only episodes ago, uninterested in Daenerys Targaryen and her dragons, and intriguing to think how his murdered father would react could he see his son’s actions.

However, it’s Cersei Lannister that struggles most of all under the weight of family expectations. With King Tommen refusing food, heartsick at the imprisonment of his queen, it’s his mother who takes to the cells to visit Margaery and offer “comfort.” He’s moved by his mother’s empathy, almost as angrily moved as Margaery is by Cersei’s gloating visit. Cersei has always prided herself on being the most like her father when it comes to matters of cunning, a title that almost certainly belongs to her brother Tyrion, a fact made obvious by how blindsided she is by what transpires next.

Blind to the danger that lurks anytime Olenna Tyrell and Petyr Baelish inhabit the same area, blind to their cunning, just as she’s blind to the fact that they murdered her son, it’s only midway through the High Sparrow’s speech that Cersei realizes that she has painted herself into a deadly corner from which there may be no escape. Cersei is about to get a long overdue dose of comeuppance, something the Lannister collective have been needing for quite some time.

The characters on “Game of Thrones” are all imprisoned. Some are trapped by chains and cells, some by lies and deceit, some by duty and obligation, but all are bound by the expectations of the family that raised them. And no matter the chains that bind them, no situation will ever be as insurmountable as learning how to navigate the family you’ve found, the legacy they’ve left, and the life you’ve yet to lead.

Interestingly, Daario suggests that Dany is the only person in Meereen who isn’t free, trapped as she is by the expectations of a ruler and a queen. More than that, as mhysa to the freed slaves, Dany also carries the burden of motherhood and the responsibility that goes with it, for thousands of citizens. The fact that her last (known) relative in Maester Aemon dies in the episode without Dany’s knowledge, leaving her as the last living Targaryen.

Between the attempted sexual assault of Gilly and Sansa’s rape tower, it still wasn’t a great episode as far as matters of sexual violence on the show go. The problem that “Game of Thrones” encounters more often than not when it attempts to tackle these smaller, more human moments of the aftermath of trauma, is that it’s just not built for it. There’s no way to sufficiently capture the grief of Sansa after being raped because there are fifteen other characters that need servicing in each episode. The same was true when the show used to do its “Theon’s Torture Time” drop-ins during season three. There was no way to adequately build out the ramifications of Theon’s fate because to do so would require far more of a time investment than the show could afford. So when people say that “Game of Thrones” should stop featuring rape as a plot, it’s not so much that it should stop featuring rape just because rape is bad. It’s that they should stop featuring rape because it is physically impossible for the show to portray it in the sufficiently grave light that it deserves. As it stands, Sansa’s fate leaves two possible options for resolution: Either she rises up, more powerful than before and uses her rape as PROOF that she is a STRONG WOMAN and she has OVERCOME ADVERSITY (which conveniently overlooks the fact that she’s already overcome the razing of her home, the ritual slaughter of her family, her near first marriage to a sadist, etc.) or she’s rescued from her terrible fate by outside forces. Either way, those aren’t great options and they aren’t great justifications for making that particular story choice.

The less said about the completely unnecessary scene between the Sand Snakes and Bronn the better. Bronn was poisoned, seduced, and then given an antidote, but why? Boobs? Boobs, apparently.

It’s weird that Melisandre would appeal to the parent that has the most affection for Shireen on the matter of sacrificing her to the Lord of… oh no.

For as many plots that fell a little short, this episode was far better than it had any right to be. Credit its success entirely on the kinetic introduction of Tyrion to Dany and on the brilliance of Lena Headey’s subtle facial reactions.