As Republican anti-poverty policies fail to reduce poverty, states are doubling down on making the poor miserable 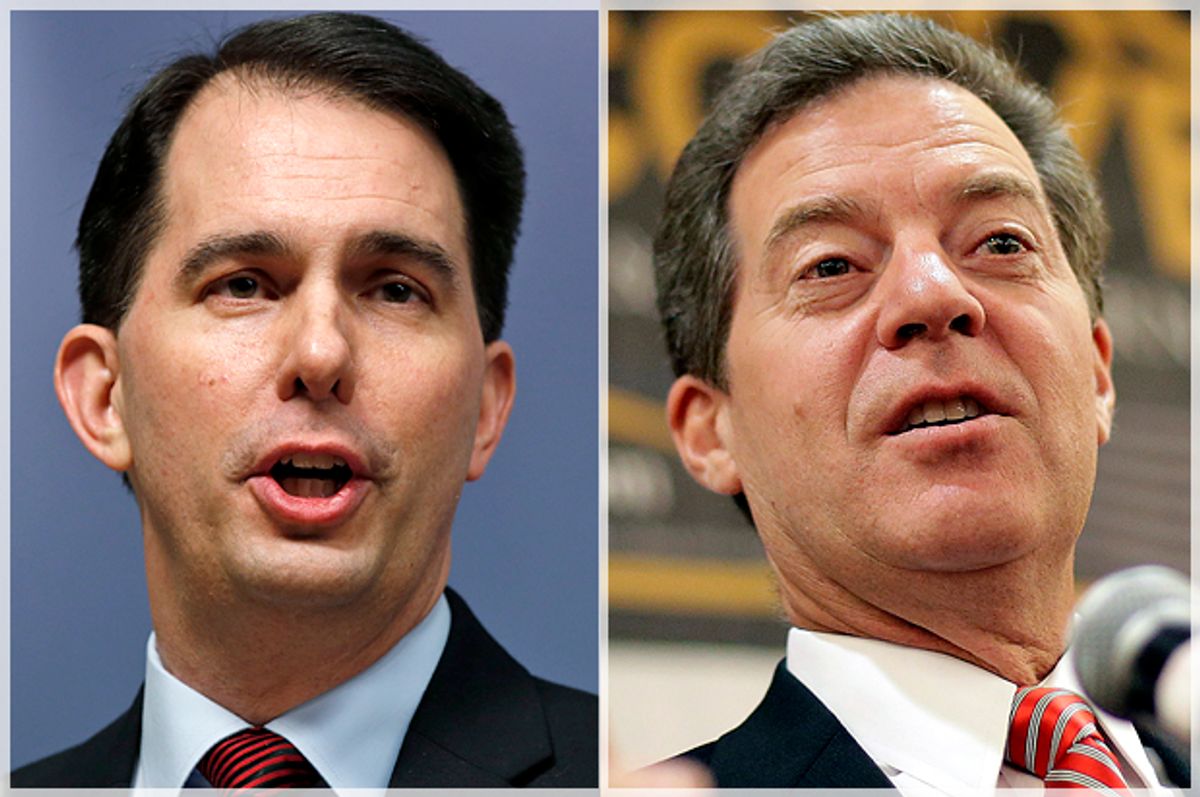 Happy Memorial Day! But if you’re in Wisconsin, and relying on food stamps, remember that Republicans don’t want you to have ketchup on your hamburger. They’d probably rather you didn’t have a hamburger at all, but Wisconsin farmers and ranchers have clout, and so proposed cuts to the Supplemental Nutrition Assistance Program made room for Wisconsin products. But they still don’t want you to have "crab, lobster, shrimp, or any other shellfish." Or ketchup. Or spaghetti sauce. Really.

For now, that’s all grandstanding. SNAP is a federal program, and the Obama administration hasn’t allowed states to restrict food purchases that way. But that hasn’t stopped GOP legislators from trying. Maine and Missouri want to ban SNAP “junk food” purchases. Wisconsin and 16 other states are also trying to drug test recipients.

And Wisconsin has nothing on Brownbackistan, I mean Kansas. The state has already outlawed the use of Temporary Assistance for Needy Families program debit cards at a range of businesses, including movie theaters, college sports games (?) and cruise ships. (There goes the welfare cruise ship business!) Kansas TANF recipients also are unable to withdraw more than $25 a day from their accounts. That means to withdraw $100, they’ll pay five bank fees (since ATMs only dispense $20s). Banks win, the poor lose.

All this is happening against the backdrop of GOP policy failure. We’ve had a 30-plus year experiment in Republican approaches to the problems of poverty and declining economic opportunity – and it’s turned out abysmally. Ronald Reagan convinced a lot of people that “we fought a war on poverty, and poverty won,” so Democrats came together with Republicans and slashed the largest welfare program for families with children, first in the states, then federally. Bill Clinton signed the federal bill into law, thinking he could get the issue of the lazy poor behind him, and then concentrate on the supports low-wage workers might need to climb.

Of course, Clinton never completed that part of his agenda; he got distracted by the GOP witch hunt known as impeachment. Republicans still didn’t want to make friends even after Clinton gave them punitive welfare reform; go figure.

Then George W. Bush became president, and we got a lesson in the way tax cuts create jobs – as in, they don’t. In eight years of the Clinton administration, which raised top tax rates, 23 million jobs were created, compared with 3 million in the eight low-tax Bush years.

It might be time to try a whole new approach to fighting poverty – raising the minimum wage; strengthening workers’ ability to bargain; investing in infrastructure to shore up our roads, bridges and rail system but also to create jobs; expanding access to college. Instead, red state GOP legislators are pushing ever crueler ways to treat the poor like garbage.

Sam Brownback’s Kansas is becoming an ever more awful dystopia. It’s an absolute laboratory for tax-cutting, welfare-slashing schemes, and it’s circling the drain economically. Scott Walker is an amateur compared to Brownback, but he’s working hard to make sure Wisconsin ties Kansas for the most dysfunctional economy.

The Wisconsin GOP’s bogus health claims for the SNAP cuts are belied, the Huffington Post observes, by the fact that the amended law now allows the purchase of any and all dairy products, thanks to the power of the state’s dairy lobby.  Theoretically, a SNAP recipient could spent the whole month’s allotment on “Dippin’ Dots,” one legislator notes. "The 'ice cream of the future' is now on the list of what’s acceptable to pay for, but a bottle of ketchup is not," he noted.

But of course this isn’t about the keeping the poor healthy; it’s about punishing them. The fact that the cuts almost certainly won’t be enacted makes them more cynical, in a way. This is how you tell the Kochs, and scared white people, that the slackers and moochers are being punished. It accomplishes nothing, but it’s good politically. That’s still the core premise of Republican politics, and it will remain so through the 2016 election, at least.