"Over there": The battle for Cantigny and the birth of our modern Army

The doughboys' first victory of WWI was brutal, harrowing, confusing -- and marked the US military's coming-of-age 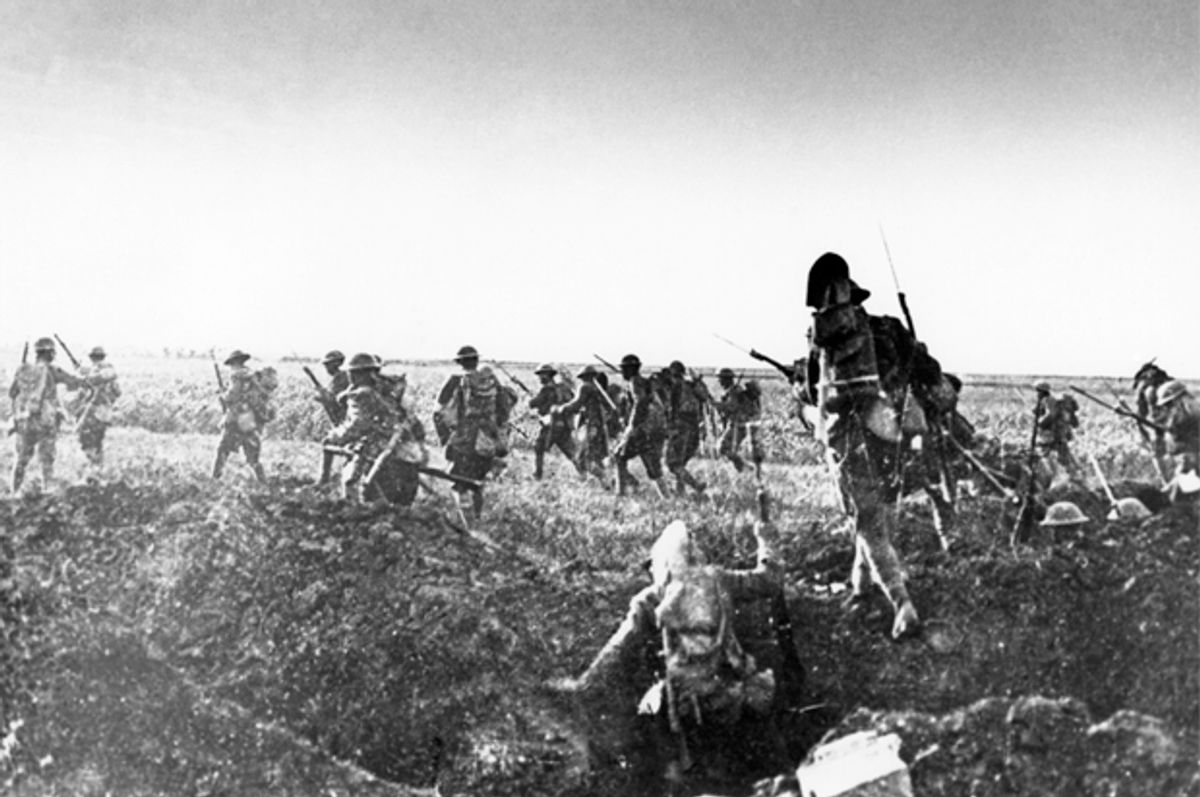 The 28th Infantry Regiment of the First Division, A.E.F. going over the top on May 28, 1918 during the first American offensive of World War I in the battle of Cantigny, France. (AP)
--

Adapted from "First Over There: The Attack on Cantigny, America's First Battle of World War I"

On Memorial Day, May 30, 1919, barely six months after the guns of the World War fell silent, at a brand-new U.S. cemetery on the outskirts of Paris—the first of seven that would be built throughout France and Belgium for America’s recent fallen—President Wilson spent "Decoration Day" laying a wreath and paying tribute to "men of a unique breed" who "crossed the seas to a foreign land to fight for a cause which they ... knew was the cause of humanity and of mankind."

Seventy miles away, on the scarred earth and grassed-over trenches among the ruins of the village of Cantigny, young soldiers with the U.S. Army’s Graves Registration Service had the grim task, then into its fifth month, of locating and disinterring the remains of America's fallen for proper reburial. The piles of brick and twists of splintered timbers where they dug marked the place where one year earlier the German Army had pushed the furthest west in an effort to break the Allied lines, and where the Americans—then new to the war and still unproven in battle on the Western Front—retook the village from the enemy in what would be America’s first battle and victory “over there” in a world at war.

Today, 96 Memorial Days later, the roll of those we honor includes the fallen from another larger, deadlier world war, a war full of larger battles and a resonating victory that keeps World War I in the shadows of forgotten history. "First Over There" is my effort to tell the story of a small fraction of these men, the few who fought at Cantigny, whose sacrifice has been long relegated to history’s footnotes. And to underscore the larger truth that the narrative of America’s contribution to Allied victory on the Western Front, however late it came, began at Cantigny, and it did not, as I say in the book, “end at the cemetery":

[I]t was on the battlefield around the village, where so many breathed their last, that the future of the war was written. Marking the first time that an American unit would capture enemy territory, the 1st Division’s improbable victory in what Pershing called “this great battle” was the first American dent in the impregnable armor of the Western Front. Making far more than a single statement, Cantigny was the doughboys’ baptism by fire, and for those who survived, it became the crucible by which they would measure all subsequent experience, in large-scale fighting at Soissons and the grand Meuse-Argonne offensive.

Historically, the fight for Cantigny was the first American clash with the German Army, a conflict between two world powers that would see many bloodier fights over the next twenty-seven years. Tactically, the operation previewed modern military methods, marking the first time American soldiers fought with the intricate support of artillery, machine-guns, flamethrowers, grenades, gas, tanks, and airplanes, signifying the establishment of combined arms and the birth of our modern Army. Thus, May 28, 1918, was the US military’s coming-of-age—the day it crossed a historical no-man’s-land that separated contemporary fighting methods from the muskets and cannon of the nineteenth century.

The 1st Division’s casualties in the battle tolled more than 1,600 men. Thinking as one does in the context of the First World War as a whole, this number is small, but the scale of turning points is not always grand. Not always is a vital battle of war marked by the magnitude of Operation Overlord on D-Day, the desperate struggle of the Marines on Iwo Jima, or the romantic attachments of historians to the pivotal battle of Gettysburg. Often the tide of events reaches a peak on the corner of a small foreign field with relatively few witnesses.

Cantigny was such a moment, reminding us that in history’s malleable narrative, scale is no measure of significance. The decision to attack the Germans first at this small village would prove momentous, and the surge stirred by the battle’s timing and outcome would not only elevate the AEF’s role on the Western Front and in the World War, but would prove America’s first small step toward a colossal Allied victory.

The first reports of American victory at Cantigny made their way into print by the second morning of the battle, May 29, 1918, even as General Bullard’s soldiers hung on tenuously to their positions in a struggle against death under a rain of enemy steel. Triumphant headlines monopolized the front pages of newspapers: “Americans Take Town Alone,” “Sammies Shout ‘We’re on Our Way to Berlin’ As They Take Village,” and “Yankees Yell As They Take Cantigny,” all bought up by a public thirsty for good news from “over there.” It had been thirteen long months since the citizenry had been stirred by President Wilson’s eloquent call to arms—“The world must be made safe for democracy”—and since then, communities had seen their high school students and local businessmen flock to the colors in growing numbers. Hometown papers carried daily articles about local boys in training, and published letters home in devoted sections, “News from the Front,” or “Letters from the Trenches.”

So when morning headlines carried bulletins of America’s first victory against the Germans—against “Kaiser Bill” and his dreaded “Huns”—a national pride was ignited that would endure unmatched by any subsequent news until war’s end. In the years after the Armistice, each May 28th would see editorials celebrating the battle, often including interviews with local veterans of the storied attack, occasionally enlarging the deeds of many into exaggerated legend. John Pershing and Robert Bullard, even in retirement, would each preside over “Cantigny Day” ceremonies, which often coincided with Memorial Day.

Through the 1920s and ‘30s, “Cantigny” remained a symbol of American sacrifice and triumph, a uniting emblem that finally exorcised the dividing demons of the Civil War in a way the Spanish-American War never could. But then came Pearl Harbor. And D-Day. And the Bulge. And in the wake of these epochal events, the 1st Division’s attack at Cantigny lapsed into footnotes, its story left to slumber for a century.

This book is my effort to pull America’s first fight of the Great War out of the dark shadows of a forgotten past. It is an attempt to memorialize the battle by revisiting a few of war’s irreducible truths—that victories in combat are the collective actions of otherwise ordinary citizens, that statistics cannot tell sacrifice’s story, and in war, no matter how many millions are killed, soldiers die as they lived, one by one by one. The last Cantigny veteran died in the late 1990s, and with the passing of Frank Buckles in early 2011, the living narrative of the doughboy on the Western Front was forever sealed. Any attempt to breathe life into names chiseled in the faceless marble crosses at American Cemeteries or to pierce the anonymity of featureless lists of the missing can never be complete. Soldiers’ private writings, official reports, and memoirs are now all we have, but they add rich color to fading, sepia-toned photographs. They reveal the transformation of farmhands from Kansas and factory workers from Michigan into soldiers. They shed light on the difficult transition of a handful of professional Army officers—veterans of quieter times—into commanders of the first American fighting force on a world stage. And they chronicle the front-line education under machine-gun and artillery fire that turned college students and young professionals into leaders of men.

The diaries and letters of Cantigny veterans contain expressions of dread or nerves otherwise hidden beneath layers of youthful bravado. They uncloak the men who fought to the high ground of the village, revealing an inner spectrum of adrenaline, strength, fear, and sadness. Many were mere boys who had sprinted to enlist, propelled by images of battlefield glory. But the blood and death that soon besieged them forced a realization that war was no adventure—it was dark, confusing, brutal, and harrowing. Those who survived would go on to work as accountants, railroad engineers, and insurance salesmen; they would be elected mayor and US senator; and a few would continue military service as generals in World War II and Korea.

Though they helped bend the course of a world war, they allowed neither the battle nor the war to define them, and most only spoke of it—if at all—when corresponding with old Army friends who had shared their experience, or when pressed by family members or an occasional print reporter.

This book chronicles that small part of their life’s journey—the passage of the men of the 1st Division in World War I, from enlistment to training to France to the trenches to what General Pershing [called] a “great battle of the greatest war in history.” It is the story of the first “over there.”

Adapted from "First Over There: The Attack on Cantigny, America's First Battle of World War I" by Matthew J. Davenport. Copyright © 2015 by the author and reprinted by permission of Thomas Dunne Books.