The military is buying patriotism: A Memorial Day nightmare about Pentagon budgets -- and veterans used as a sideshow

This holiday, let's tell the truth: We remember our fallen veterans by not making new ones 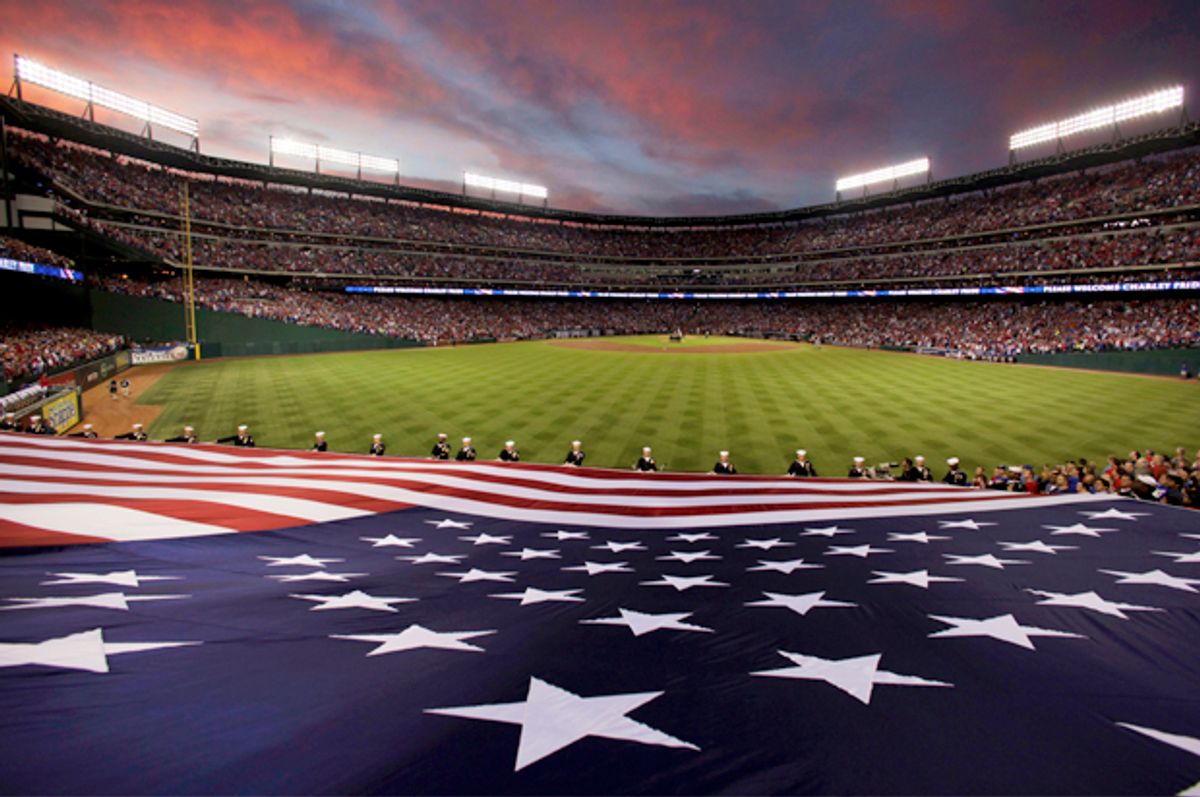 The American empire is dying, and the economy is declining. Dysfunction and disrepair define the sick status and mechanized failure of educational, medical and governmental institutions. One in 10 Americans take antidepressants, unemployment and underemployment soar, poverty blights and obliterates inner cities and rural villages alike, 45 million adults are functionally illiterate, and anyone with all but the lowest lucidity can see clearly that the political system operates as bribery for the highest bidder. Given that the top 1 percent own 40 percent of the wealth, it is likely that the extortionists who purchase political representation all shop at the same clothing store.

In an America suffering from increasing infirmity, anything that allows for denial of reality and comforts delusions of superiority becomes essential and central to the national identity. The United States military, with its garish parades and idolatrous rituals of uniform and flag consecration, functions as the final and fading echo of its country’s creed: “We are better than the rest.”

The real religion of America is America, but as the old gods of economic triumph, middle-class stability and cultural achievement begin to die, chances for sacrament become slim. Commentators and Senators were aggrieved to learn that one of America’s favorite ceremonial rites was nothing more than the slick synthesis of public relations and propaganda.

The New Jersey Star-Ledger reports that from 2011 to 2014, the Department of Defense paid 14 NFL teams a total $5.4 million, while the National Guard paid 11 teams $5.3 million, to “honor America’s heroes” before football games, and during halftime shows. Not every NFL ceremony was part of the pay to play scam, but many of those maudlin, red, white and blue salutes to the soldiers, Marines, airmen and sailors, complete with jet plane fly overs, marching bands and giant banners were no different than the advertisements for Coca-Cola or Viagra.

There is an ironic symbiosis between the NFL and the Department of Defense. Both institutions capture American zeal for grandiose displays of strength, bravado and gladiatorial machismo. They both benefit, however, from an unwillingness on the part of the public to closely examine what transpires beneath the surface of spectacle. A friend of mine once made the dark joke while watching a football game, “I’m just here for the concussions.” The administration of the NFL has tried to deny the connection between gridiron combat and early dementia, but the evidence is overwhelming.

The Pentagon is obstinate in its refusal to deal with the sexual assault epidemic in the military, where some reports suggest one-third of servicewomen are raped, and most of them are too frightened of the consequences to their careers to report the crime. Twenty-one percent of all domestic violence cases are committed by combat veterans. Stacy Bannerman, a leading advocate for the service and protection of military families, has written a bill that would provide military spouses suffering from violence and harassment transition funding to escape their tormentors, and begin new lives. The Pentagon is resistant, and not one Senator has yet to sponsor the bill. Meanwhile, the U.S. government and military establishment has apparently proceeded without shame or hesitation to allocate taxpayer money to the let the world know they are ready for some football, and commercialize the catastrophe of war.

Regardless of how one feels about lionizing the military, it is distasteful, and indicative of America’s cultural collapse that the NFL jumps at the opportunity to take millions of taxpayer dollars to exploit a genuine affection and gratitude many Americans feel for veterans to rehabilitate its own image, present itself as not a money printing machine destroying the brains of its players, but a company of patriotic virtue. Sincerity and authenticity no longer exist in America, because everything from the cheaply vulgar to the seemingly sacred, wears a price tag. Capitalism triumphs over culture when it sublimates everything into commerce, and when it morphs every interaction into a transaction.

As a fairly regular viewer of football, it now strikes me that rarely have I seen any opening or halftime ceremony include veterans in wheelchairs or vets struggling to stand on prosthetic limbs. Living and breathing human beings who come to represent the cold and callous consequences of war are not convenient symbols for American greatness or military adoration. The fact that what many citizens believed was an attempt to celebrate sacrifice was merely moneymaking stagecraft captures the vacuity of “support the troops” slogans. The fact that on the stage those veterans who most need attention and assistance – the wounded, traumatized, homeless – almost never appear captures the hypocrisy.

Many Americans believed that the military existed in the world of valor and sacrifice beyond the tawdry traps of greed and con artistry. They aren’t exactly excited to learn that the purity of the Pentagon is yet another American invention. Pundits, like Megyn Kelly, and politicians, like Sen. John McCain, have called the NFL “disgraceful” for accepting payments from the Department of Defense. Condemnation, or even acknowledgment, of the military’s role in the deal is mysteriously missing from the teary speeches on Fox News. Just as any capitalist should understand, the Pentagon did not donate millions to the NFL. They paid for a service. An inspection of that service fills the nostrils with a putrid odor and presents a hideous image. Something is rotten in the State of America.

When the Pentagon enlists the NFL in a propaganda campaign to transform America into Sparta, it equivocates war with football. Football is a testosterone fueled battle where warriors in uniform heroically overcome the odds to impress and excite millions of viewers with their feats of courage, speed, and strength. The long term consequences of dementia and disability are irrelevant. Similarly, war is now an abstract pride stimulator for Americans. All the troops are heroes, and the wars in Afghanistan and Iraq are fought for freedom. It is fun to watch Chris Kyle kill people. The long-term consequences of death, and destruction of American and Middle Eastern lives are irrelevant. War, like football, is now entertainment, and the entertainment is an anesthetic for the pain of American failure. As the late George Carlin said, “We can’t educate our young people, can’t feed our poor people, can’t take care of our old people, but we can bomb the shit out of your country.”

There is an insidious connection between the State, major corporations, and the creation of a country where the vast majority of the people subsist on crumbs falling from the feast of the banquet table overhead.

Gore Vidal once taught a political science course in a single sentence: “The only subject that a mature people in a so-called republic should be interested in is who collects what money, to spend on what, for whom.”

America is no longer a republic in political procedure nor is it truly democratic in cultural practice. It is a militarized economy and a garrison state. Fifty five percent of discretionary spending from the federal government goes to the military. That amounts to 27 cents of every tax dollar, and it does not include Department of Energy money spent on maintaining a nuclear arsenal, the budget for the Department of Homeland Security, or the costs of recent wars. Joseph Stiglitz calculated the cost of the war in Iraq at $3 trillion. The war in Afghanistan’s bill totals $1 trillion. As the cruelty of American foreign policy makes more veterans with disabilities and psychological trauma, it is medically and morally necessary to continually increase funding for the VA.

The imperial theater of military glorification in football stadiums is a small part of the large, and largely successful, effort to intellectually paralyze the public with propaganda. The ruling class, and their loyal court of jesters in Washington, are not likely to explain how American tax money goes to nothing that is actually useful and helpful to the public. Save for Dwight Eisenhower’s too little and too late farewell address in which he warned of the dangers emanating from the “military-industrial complex,” few national officials, Republicans or Democrats, have shown a willingness to confront the cannibalistic Pentagon. So, it proceeds to eat through all the money and resources that might otherwise go to quaint, weird things like schools, hospitals, libraries, trains, buses, and bridges.

It is most depressing that the majority of Americans seem like easy marks – willing participants in their own exploitation. When President Truman designed the creation of the National Security State – retaining wartime spending during peace time, creating the CIA, enforcing loyalty oaths in the government – Republicans in Congress advised him that it would work only if he “scared the hell out of the American people.”

If Americans were not so easily frightened by Muslim monsters underneath the bed, and not so eager to celebrate itself with a vision of military supremacy, it might exert enough political pressure on Washington to truly memorialize its dead soldiers by committing itself to not making any new ones. Instead America will settle for bloated and bombastic tribute ceremonies at football games. The Department of Defense is cynical and savvy enough to take advantage of the apathy and ideology of Americans. Otherwise, they would not have offered the NFL millions of dollars.

The fun is over for the NFL now, and it will soon end for the entire country. That is until and unless America reaches a day when schools and hospitals have all the money they need, and the Pentagon has to host a bake sale to fund its new bomber.