America will die old and broke: The systematic right-wing plot to ransack the middle-class nest egg

Despite what conservatives say, the safety net works—which is why the 1 percent wants to stage a hostile takeover 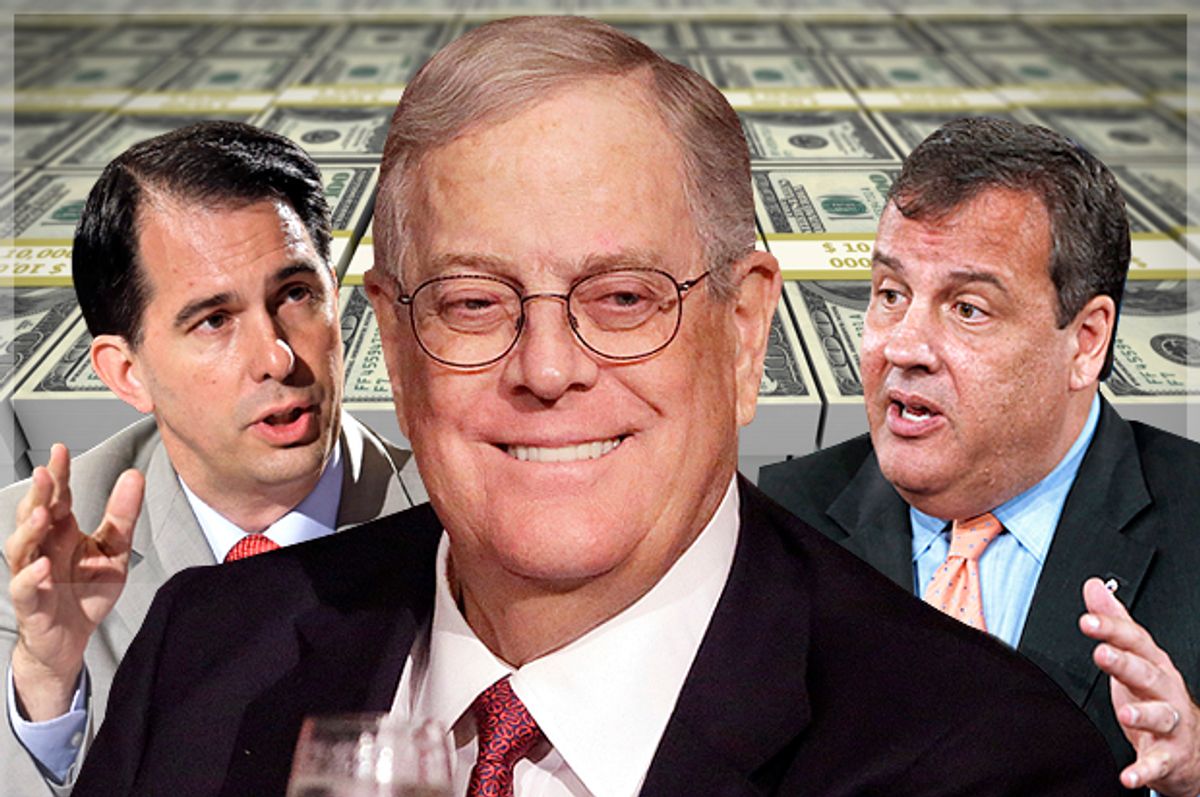 Through a quirk in state term limits combined with a terrible midterm election, the Nevada legislature has been taken over by amateurs and extremists. The legislature is now debating whether to dismantle the Nevada public employee pension system (PERS), a system that has gotten consistently high marks for transparency, responsibility and stewardship.

This attack on retirement benefits follows a very familiar pattern of fabricating data to destroy retirements that work and that people really like. It’s the same nonsense and lies used to destroy private pensions two decades ago, but this time it’s being done as part of a partisan wet dream of “limited government.” It’s a strategy as American as fast food and crumbling infrastructure.

This latest skirmish in the retirement wars perpetuates the biggest lie ever foisted on America—that we cannot afford retirement benefits.

Private pensions have indeed been systematically destroyed in recent decades, and replaced by “defined contribution” 401k plans. The conventional wisdom is that pensions are “too expensive,” but this is the heart of the lie. A great many private pensions were once over-funded, but a change in law allowed companies to “invest” the “excess” funding in other parts of their business. Once businessmen could legally raid the pension fund, the idea of private pensions was over. Many books have been written about the great pension theft. I recommend, for one, reading "Retirement Heist: How Companies Plunder and Profit from the Nest Eggs of American Workers." Spoiler alert: you will feel rage.

I’m no bystander in all this, because I’m a member of the Nevada pension system through my day job.  Even when I considered myself a Republican, I supported the pension system, just as my conservative friends and colleagues still do. But a lot has changed in a few years. Public pensions used to have bipartisan support, but the dysfunction and extremism that has turned Washington D.C .into a shit-show has spread to states like mine.

The attacks on benefits are always underhanded and dishonest, an effort to keep critics quiet, and this latest attempt is no exception, because it only targets future members of the pension system. It’s the same tactic used in the constant assault on Social Security -- just take it from people who don’t have it yet. My favorite visual is the conservative who collects Social Security month after month (after month after month) then votes for politicians who will destroy those very modest benefits for his children -- all while reciting the false narrative of “not saddling" those same children with debt.

A better idea (rather than stealing from our own children) would be to pay the reasonable levels of taxes necessary to fund the programs we all use. But “family values” conservatives are always delighted to burn the crops and salt the earth behind them, children be damned.

It’s understandable that people without pensions resent those who still have them. It’s much easier to rage about a schoolteacher’s pension than it is to understand the systemic greed of high finance, and that’s by design. The rich and powerful who looted private pensions have managed to set the members of the middle class upon one another. At the same time, the purveyors of 401k plans get rich off of fees from individual accounts. Millions of people are shuffled into the market to be preyed upon by the vultures of high finance, who get paid no matter how much money you win or lose in the grand casino.

I admit that there are reasonable criticisms of pensions. There are always a few people, an overpaid manager or administrator perhaps, who manage to game the system through overtime pay or inflated salaries. Critics can point to the handful of people with six-figure pensions with understandable fury, but to extrapolate it to everyone is plain hogwash. In my own pension system, the average monthly benefit for regular retirees is around 2,200 a month, and retirees are not eligible for Social Security.

For those who think pensions should all be abolished, I’d draw your attention to the constant attacks on Social Security. “Serious” rightwing presidential candidates, and even some Democrats, have proposed upping the retirement age, cutting benefits and in general making life a little less pleasant for retirees.  The hope is that many of us will die before we can collect what we’ve earned through decades of work. Even though the “trust fund” has a balance of trillions of dollars, the money has been used to fund everyday government spending. Politicians would rather loot your retirement rather than fund government spending with honest taxation.

I’m not even saying that we have to sacrifice other spending priorities to fund retirements, because there’s enough wealth in this country to do both.

But the very question of affordability is moot, because the attack on retirement has nothing at all to do with money. The real goal of conservatives is to break government, so that Wall Street and the well-connected can feast upon the carcass, gorging themselves on ill-conceived privatization schemes. America has become epitome of a failing company, and politicians are acting as the investment banker, breaking what’s left into pieces to sell off for quick cash.

As a member of Generation X, I’ve spent my adult life riding waves of bubbles, watching housing values implode, retirement accounts halved and job prospects evaporate. With each subsequent crisis, I and my cohort are asked to “give up a little more” to help the country “recover,” even as a tiny fraction of people and corporations reach unprecedented, unimaginable levels of wealth. This disparity is unsustainable.

I can almost sympathize with the Tea Party, a group built on similar feelings of frustration and anger. Their only mistake is that they do not see who is really picking their pockets. It’s not immigrants, “the gays” or liberals. Tea Partiers have tragically bought into the total nonsense that “poor people” are somehow responsible for the malaise of the middle class. It would be almost amusing if it weren’t so tragic. Today’s Tea Party voter is willing to sell out the future of his own child, because he can't see through bullshit shouted at him by Fox News every day.

We cannot afford pensions or health care or food stamps, but, by god, we can afford $1.5 trillion for a plane that doesn’t fly.

Like so many workers, I’ve watched my benefits erode year after year, with frozen salaries, forced unpaid days off and ever more stingy medical benefits.  I take heart that the latest attempt to destroy the pension system seems doomed, if only because it will cost more money to wreck it than to leave it alone. But the greater war on pensions and Social Security is not over.

Libertarians and conservatives will not rest until they have unmade the last century of progress and the entire New Deal.  They will destroy and dismantle, vilify and divide, because it’s easier to make people resent one another than to make society better. They want to not only halt progress, but to turn back the hands of time. It’s not just pensions, but overtime pay, weekends and the forty-hour workweek that are all in danger. It’s an act of self-destruction and stupidity. They drill holes in a leaky boat in which we are all riding, somehow unaware that when the boat sinks, they will also drown.