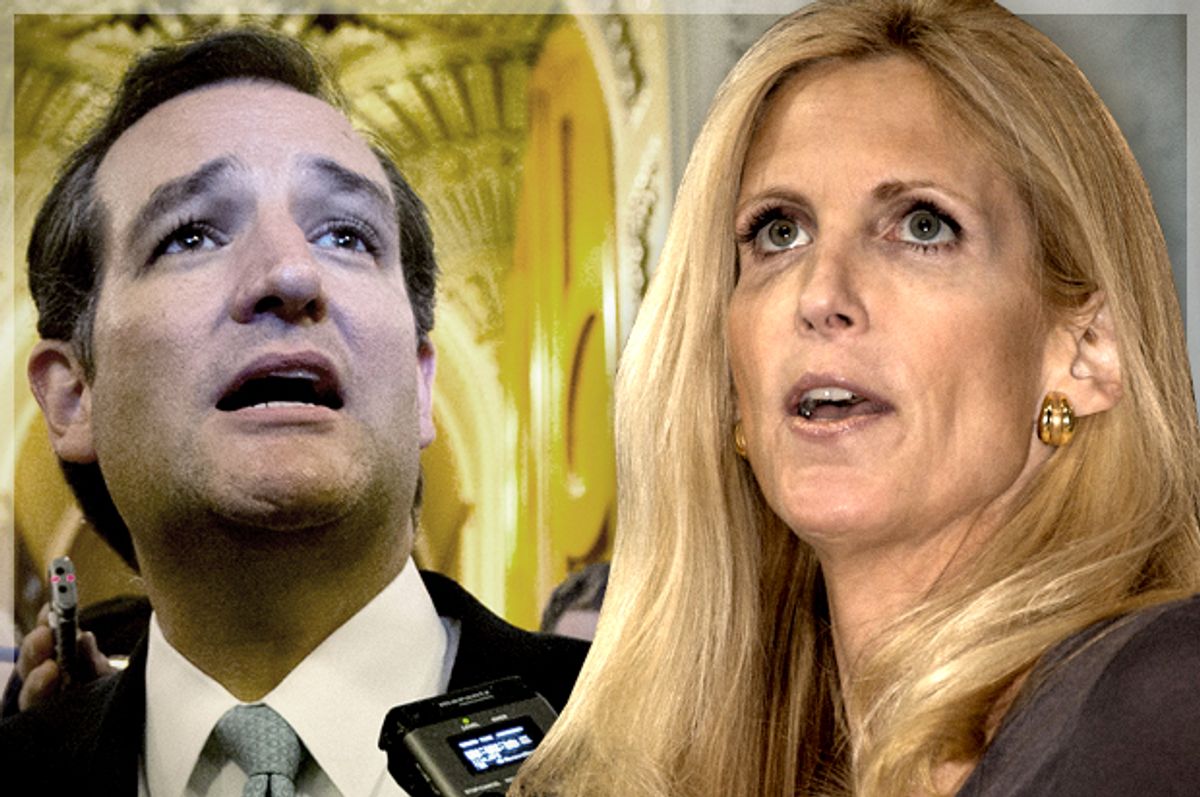 Lloyd Grove's new piece has it all -- multiple Ted Kennedy cracks, a sexy description of what she's wearing, provocative but not too serious conversation about immigration, and finally an Adolf Hitler kicker.

Here are the highlights!

"She wears tight, seemingly painted-on jeans, a hint of midriff showing beneath her blouse; at 53, she still rocks that “Vixen of the Right” thing that once prompted Playboy to ask her to take it all off. In a rare display of caution, she declined."

Requisite denial that her act is mere right-wing performance art:

“I don’t know why liberals find this idea about me comfortable ....  I have summer-camp friends—who, when they see people say ‘this is just an act, she doesn’t really believe it’—they would write indignant letters and say, ‘No. She would march up to me on the hiking trail and explain that Nixon was being lied about.’ ”

Her new (topic of latest book goes here) book is about how everything is Ted Kennedy's fault:

“(It was) an evil-genius plan to change the country. ... Obama never could have been elected in this country but for Teddy Kennedy’s immigration act. Never, never, ever, ever!”

“In order to change this country to one more favorable to crazy liberal policies, Democrats passed—and Republicans were hoodwinked into passing—this crazy 1965 immigration law that has changed the country in shocking and dramatic ways ... This has been our law for 50 years now, and I blame the Republicans for idiotically continuing it. ... As for these idiot Tea Partiers or whichever conservatives are idol-worshipping Ronald Reagan, he was great for his time, but it was a different world. I don’t think he’s going down as the greatest president when he signed an amnesty law.”

She hates immigrants but is really a sweet person under it all:

"(Coulter, however, is unfailingly friendly to our waiter, who identifies himself as “Luis,” an immigrant from Ecuador who came here 10 years ago and is working his way toward U.S. Citizenship.)"

"Hispanic groups will move into neighborhoods and say, ‘we don’t want any blacks here,’ and start physically attacking blacks. It’s kind of wild. In most race relations, it’s never blacks who are victims of terror, it’s whites. Now blacks are being terrorized.”

“They are so important culturally in America—I mean the humor, the actors...they have the comedians and the music. I love Dave Chapelle, and my close personal friend Sherrod Small. I love Eddie Murphy, although he doesn’t do anything anymore. And Chris Rock.”

Even the wingnuts aren't conservative enough:

End on a Hitler line, which is actually praise of Mitt Romney and, yes, an attack on Teddy Kennedy!

“Look, if (Romney) had to be Adolf Hitler but managed to take out Teddy, I would salute him to end that menace.”