Ann Coulter: Mexican culture "is obviously deficient," and Hispanics are "not black, so drop the racism crap"

"If you don't want to be killed by a Mexican, I don't know what to tell you" 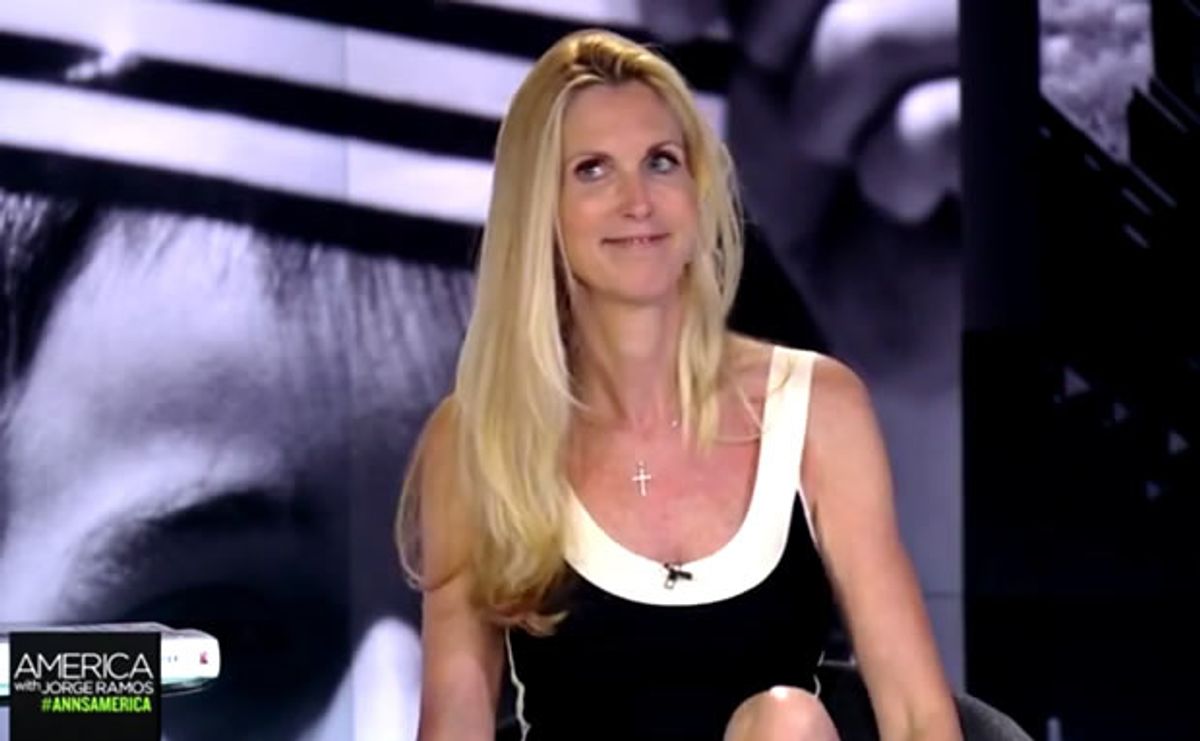 On Fusion's "America with Jorge Ramos," syndicated conservative columnist Ann Coulter promoted her new book "Adios, America" by repeatedly insulting not only everyone in the room and on the set, but their families, as well as the entire country of Mexico.

For example, in response to a question about racism in America from a young immigrant man from Honduras, she replied, "you're not black, so drop the racism crap."

When Gaby Pacheco, an immigration activist, asked Coulter for a hug to celebrate their shared humanity, Coulter shot her down, saying that she had just recovered from "the worst flu I've ever had." When Pacheco said that would only make the conciliatory gesture all the more meaningful, Coulter shot her down again, brusquely saying, "no, let's get on with the question."

Host Jorge Ramos also caught flak, after he questioned her about a comment she made, that "Americans should fear immigrants more than ISIS." When he pointed out that most immigrants "aren't terrorists or criminals," she replied, "I have a little tip for you -- if you don't want to be killed by ISIS, don't go to Syria."

"If you don't want to be killed by a Mexican," she added, "there's nothing I can tell you."

She appeared to leave herself some wiggle room, not fully pronouncing the word "Mexican," just saying what sounded like "meh-an" in a move reminiscent of then-presidential candidate Rick Santorum's 2012 statement about "blah people." However, she quickly demonstrated that she meant what she almost managed to say.

Ramos asked her if she believed that certain peoples were genetically predisposed to crime, and replied, "no, but there are cultures that are obviously deficient, and if they weren't deficient, you wouldn't be sitting in America interviewing me, I'd be in Mexico. You fled that culture!"

Watch the entire interview with Ramos below via Fusion.