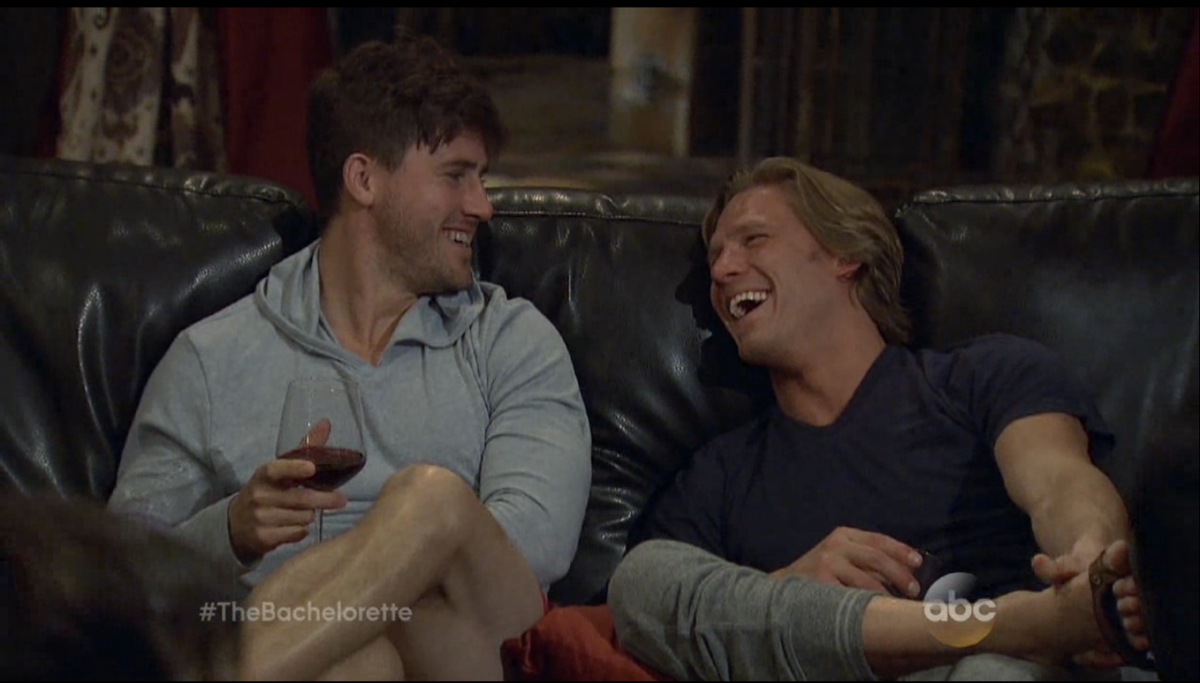 "The Bachelorette," never one to shy away from inane histrionics, released a brand new teaser for next week's episode. And as always, it features [cue dramatic music] A SHOCKING REVEAL.

In the trailer, Clint, a lug of an architectural engineer with Disney prince hair and low verbal IQ (we're guessing), confesses that "falling in love with a man never crossed my mind,” before revealing that “retired investment banker” and established turd JJ has replaced Kaitlyn as the object of the affections.

"We've grown very close in the shower ... I love JJ, so I need the rose tonight,” says Clint, as the words BROKEBACK BACHELOR flashes on the screen.

Whoah! Could this be so? Has being cooped up together in the Bachelorette Mansion caused Clint and JJ to come to terms with a new dimension of their sexuality? Will Clint and JJ join Britt and the country singer in happy romantic subplot territory? Is something legitimately surprising and interesting going to happen and burst the show's shiny hetero bubble?

Sigh -- not quite. According to TMZ, both of the guys are "straight as arrows" and "nothing gay ever happened;" rather, the whole thing is a publicity stunt that the guys were more than happy to partake in. Here's the tweet from Clint, the self-described Heath Ledger of the duo:

While we’re used to the typical reality show bait-and-switch promo shenanigans, this one has some particularly gross overtones to it. Namely, the fact that the punchline here ends up being “lol no homo” — and on a series whose host has openly said there would never be a gay Bachelor because it's not "a good business decision" — is a further slap in the face to viewers who have had to endure the most misogynist and retrograde season of the show yet. The phrase "Brokeback Bachelor," too, would almost be funny, but given the show's oppressively hetero sensibilities, it just feels trivializing: Taking a serious work of literature about two men who were tortured by their repressed sexual orientation and secretive love for each other and turning it into a cheap reality show gag.

There also seems to be a weird bit of misogyny at play here. The idea that we should find it entertaining that these two douche-bros who were cast to try to "make a connection" with this woman would rather run off together than even deal with her seems like another slap in the face to Kaitlyn, and to women in general, on a season where the Bachelorette has already been more subjugated and sidelined than ever.

The case for Amy Schumer taking over the franchise grows stronger by the day.