Rand Paul talks a good game about rights and liberty. What he's actually promising is oppression of the worst kind 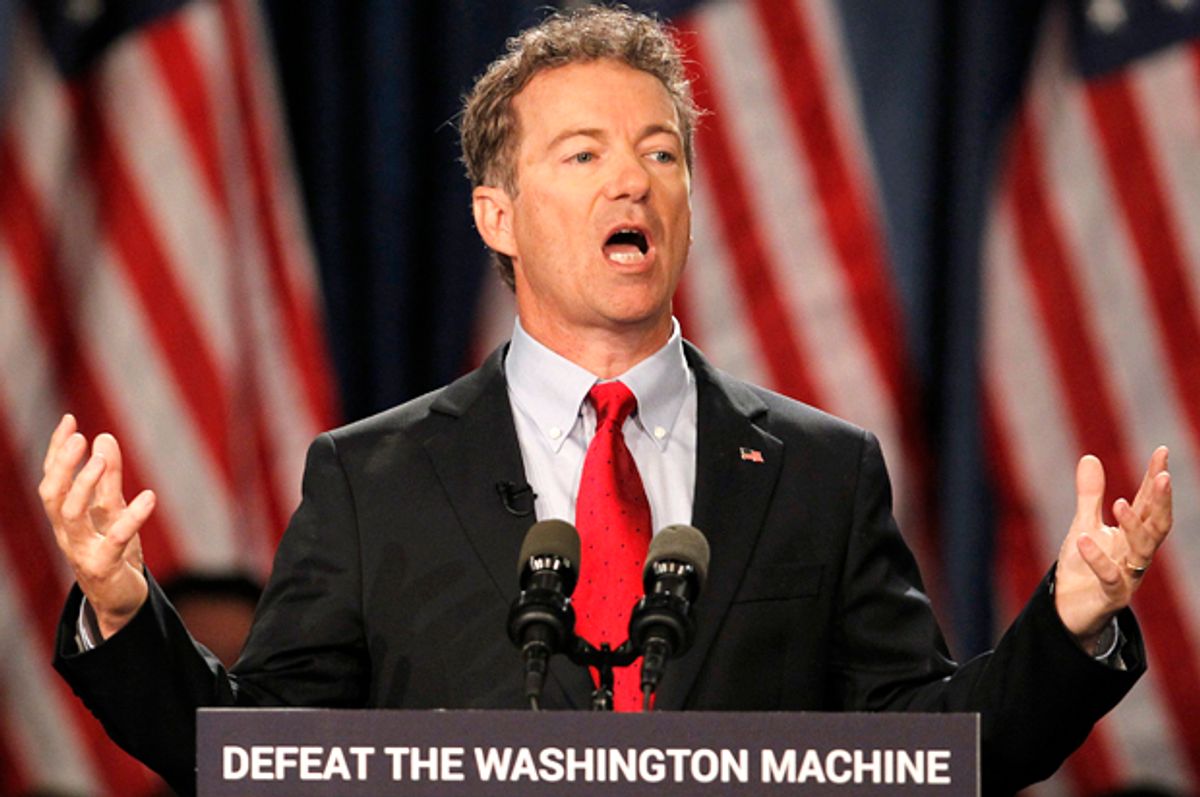 In addition to serially changing positions on several key issue areas, Sen. Rand Paul (R-KY) is a slippery operator when it comes to LGBT rights and marriage equality. Tuesday night, on "The Daily Show with Jon Stewart," Paul spent an entire segment artfully dodging his actual position on same-sex marriage and discrimination, clearly because he's busily forming a coalition of true-believers on both the libertarian right and independent voters on the left.

But if we listened carefully enough to what he said on the show, it was easy to see that his views are not only anti-gay, but they're also anti-minority as well.

Frankly, it's a shame that he skillfully changed the subject at the end of his second segment before Stewart could go there, because, logically, any debate about businesses legally refusing service to gay couples has to eventually lead us back to segregated businesses.

Rand Paul likes to say that he's not intolerant, and he repeated this qualifier on the show. "I'm not one who is intolerant," Paul declared to Stewart, "I believe in letting people live life the way they want to live it."

Well, good. Naturally, for many of us, this is an enticing lure, and Paul has manufactured a solid base with his live-and-let-live posture. It's easy to be drawn into his semantic trap until we realize that "live-and-let-live" also means allowing businesses to discriminate against whomever they choose and for just about any reason.

After declaring that's not intolerant, however, Paul added, "That includes Christians, too."

The subtext here, which he deliberately didn't elaborate upon, is that his tolerance of Christians includes tolerance enough to allow Christians to be intolerant and outright discriminatory against LGBT customers. His political discipline is shoddy, but it isn't shoddy enough that he'd openly admit to being pro-discrimination while appearing on a generally liberal television show. Instead, just before changing the subject, he admitted it in the form of an anecdote about a T-shirt shop that refused to print pro-LGBT shirts for customer.

This only scratches the surface of Rand Paul as a civil rights Trojan Horse.
Again, his disarming live-and-let-live approach is, in reality, as a passe partout -- a skeleton key that opens a gaping loophole through which a lot of terrible things can emerge.

What Rand Paul doesn't repeat very often is that the idea of same-sex marriage "offends him." On Fox News back in March, Paul said, "I’m for traditional marriage. I think marriage is between a man and a woman. Ultimately, we could have fixed this a long time ago if we just allowed contracts between adults. We didn’t have to call it marriage, which offends myself and a lot of people."

There it is. By the way, you'll notice how Paul resurrected the stale "definition of marriage" argument, which ought to be a total non-starter knowing that for thousands of years, marriage was traditionally a loveless business arrangement in which young teenage girls were most often purchased as subservient, inferior chattel. That's "traditional marriage." Our modern idea of opposite-sex marriage hasn't been around very long in an historical sense, so if the longevity of a "tradition" is meaningful, the old-school notion of marriage, with men marrying young girls as property, should be the most sacred of all, shouldn't it?

Nevertheless, the takeaway is that Paul isn't a big fan of same-sex marriage. Good thing he's not planning to marry another man any time soon.

What these remarks tell us is that it's not just social laissez faire that drives Paul's position on this matter. The entire idea of same-sex marriage offends him. Along those lines, Paul came damn close in his "Daily Show" appearance to conflating marriage equality with the Ku Klux Klan and the so-called "Ground Zero Mosque." (Incidentally, Paul reactivated a fib from four years ago, saying that the mosque was to be located "on the site" of the 9/11 attacks. It wasn't.)

It's worth noting that while Paul didn't condemn the anti-gay bigotry of religious shop-owners, he's repeatedly condemned racism, so that's something. Much like his "not intolerant" attitude about the LGBT community, his condemnations are worthless if he ever has a chance to implement his policy positions. To repeat: Paul is vocally in favor of allowing business owners to disallow services to anyone for any reason, and it's not just a matter of religious freedom to not sell a pie to a same-sex couple. Paul has a few things to say about the Civil Rights Act, which for more than 50 years has prevented businesses from refusing service to African-Americans.

In the same way he prefaced his views on religious freedom (to discriminate) with a word or two about his supposed tolerance, Paul has in the past prefaced his opposition to parts of the Civil Rights Act by saying, "I think it's a bad business decision to exclude anybody from your restaurant." Again, good. Yet he continued, "But, at the same time, I do believe in private ownership."

It's safe to say most of us believe in property ownership, but what Paul was talking about is Title II of the Civil Rights Act, which covers public accommodations and which Paul, like his father, clearly opposes.

Back in 2010, when Paul first ran for U.S. Senate, he famously clashed with MSNBC's Rachel Maddow, who successfully cornered him on Title II. But fast-forwarding to 2015, isn't the intent of Title II ("All persons shall be entitled to the full and equal enjoyment of the goods, services, facilities, privileges, advantages, and accommodations of any place of public accommodation...") ultimately the centerpiece of the debate surrounding businesses refusing service to same-sex couples: the right of business owners to serve or not serve specific kinds of customers? No wonder Paul has pivoted to religious freedom as his primary attack on marriage equality -- he doesn't want to draw any attention to what's truly driving his marriage position, and he gets to pander to the far-right base with the "religious freedom" shibboleth.

This isn't to say Paul is necessarily either racist or homophobic. But what this tells us is that Paul's libertarianism demands that racists and homophobes be allowed to practice their bigotry at others' expense. It's not just a matter of sitting in their homes stewing over how much they hate minorities; it's a matter of putting that hatred into practice and extending it far enough to harm others. This is what Paul wants to allow: legal discrimination against minorities based upon the the bigotry, racism, homophobia or general whimsy of those who control the sale and distribution of services. This is the brand of "liberty" Rand Paul is selling. Buyer beware.