What TLC's Duggar decision will tell us: Who's winning the culture war between social justice and Christian "grace"?

Forget forcing a moral decision from TLC, but how the network bets on its own interests will be revealing 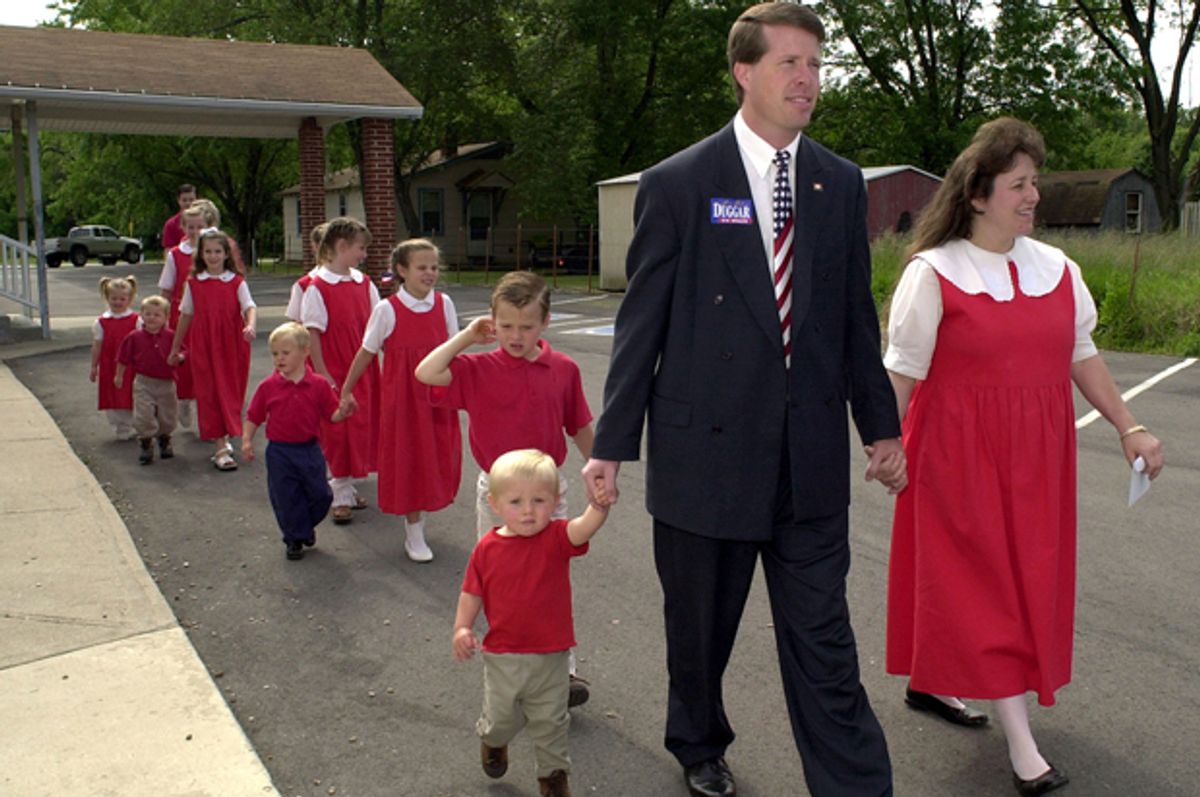 TLC, the network that airs Jim Bob and Michelle Duggar's "19 Kids and Counting," is a corporate holding of Discovery Communications, the self-described “#1 pay-TV programmer in the world.” In addition to TLC and the Discovery Channel, Discovery Communications owns Animal Planet, Science, Investigation Discovery, a controlling interest in EuroSport, and the Oprah Winfrey Network, as well as dozens more channels, both here and across the world. The company boasts 2.9 billion cumulative worldwide subscribers. TLC, however, was originally a product of the Department of Health, Education, and Welfare and NASA, which in 1972 jointly founded “The Learning Channel.” In 1991, Discovery acquired the channel, and in 1998, rebranded it to the shorter and snappier “TLC.” The network’s tag line became “Life: Unscripted.”

But at this point, TLC is not a network that seems particularly concerned about putting some good out into the world. It is now a source of frequently commented-upon irony that the network used to be called “The Learning Channel,” and with a track record that includes the openly condescending “Here Comes Honey Boo Boo” and a particularly exploitative special called “The Man With the 132-Lb. Scrotum,” it would not be that surprising if our expectations for the network were not terribly high. And yet here we are, in 2015, surprised that a TLC show about an incredibly conservative family with 19 home-schooled kids and Puritan ideas of sexual impurity might have had some dysfunction lurking under the surface.

Now, in the wake of a report from InTouch and a confession from eldest son Josh Duggar, audiences have to contend with the fact that “19 Kids and Counting,” an unscripted show about a very large family of Christian fundamentalists, has been employing a sex offender for 15 seasons of the show since its inception in 2008. Given that all the children were home-schooled—and that the police reports obtained by InTouch indicate the abuse took place inside the Duggar house—Josh’s victims were almost certainly his younger sisters. The Duggar family eventually found out the abuse, as did the local authorities, but it was buried until an anonymous tip was sent to Oprah Winfrey’s Harpo studios. Josh Duggar has since owned up to the abuse, saying that he came clean to his family and turned himself over to God’s grace. He now has three children of his own with his wife, Anna.

Little to nothing has been said about the multiple Duggar sisters who were victimized by Josh; as is the custom with sensitive cases, their names are left out of the police reports. But because the Duggars’ lives have been lived so publicly, it is not difficult to name who the victims probably are. Here is the math: When Josh Duggar was 14 years old, his sister Jana was 12; Jill, 11; Jessa, 10; Jinger, 9; Joy-Anna, 5. The rest of his sisters were not yet born. According to Extra, depending on the age of the apparent victims, they may have grounds for a civil suit, even if the statue of limitations on the criminal suit has expired.

In the past several days, enormous pressure has been put on TLC to cancel “19 Kids and Counting.” The network posted a brief statement on its website saying that it would be pulling reruns of the show from the schedule, pending a more permanent decision. That decision is still forthcoming. Meanwhile, People has an anonymous source reporting that TLC is considering spinning off another series to focus on now-married Duggar daughters Jill and Jessa, moving away from patriarch and matriarch Jim Bob and Michelle.

Typically, a move like cancellation would be nothing more than good business. TLC has no interest in angering its viewers. But as quickly as the condemnations have rolled in against Josh Duggar—including advertisers stepping away from the program and a lot of spilled (Internet) ink—a rising tide of support followed suit. Josh Duggar’s confession has gotten him an awful lot of goodwill, most notably from Gov. Mike Huckabee. This puts TLC in the awkward position of choosing sides. And that means doing something that multinational corporations are in the habit of avoiding like the plague, as much as possible: making a moral judgment.

It has become common practice for the public at large to call for institutions to render judgment on employees caught in the act of some sort of wrongdoing. The NFL had to figure out a punishment for Ray Rice; NBC had to come to a decision about Brian Williams. But corporations aren’t built for meting out justice, which might be why so many of these stories seem to go terribly awry. The government removed TLC’s obligation to the public good when it allowed it to be sold.

Indeed, in many ways, the case of “19 Kids and Counting” is the collision of two different strains of conservative politics. On one hand there is the suspicion of public institutions and sex education, which created not just the perfect environment for clandestine sexual abuse among several home-schooled children, but a reflexive impulse to hide said abuse from the authorities. On the other hand, there is the story of a channel that lost its mandate to work for the public interest and is now a prime example of profit-seeking irresponsibility gone amok.

If TLC decides to cancel the show, the network would get the benefit of taking a stand against covering up (and profiting from) the sexual abuse of minors—largely, of course, from viewers who aren’t in their target demographic, because they weren’t watching “19 Kids and Counting” in the first place. If TLC decides to hold onto the show, they’re putting their corporate and philosophic faith in the strength of Christian redemption—either that a) Josh Duggar is truly and completely reformed and no longer a danger to the other Duggar children or children at large, or b) that the narrative of sin, forgiveness and redemption will resonate with the viewership of “19 Kids and Counting,” who will tune in to see what happens next. If Huckabee’s enthusiastic support is any indication, there are plenty of like-minded Americans who would stand behind Josh Duggar.

The question of moral responsibility is too little, too late; TLC’s moral responsibility, if it has any, would have dictated that they never greenlight the show. Now the network has to decide which side of this particular culture war it wants to be on.