The GOP's impotent "Millennial" warfare: What Hillary Clinton understands that Republicans simply do not

Right-wing operatives are hard at work trying to ingratiate Republicans to younger voters. Here's why it won't work 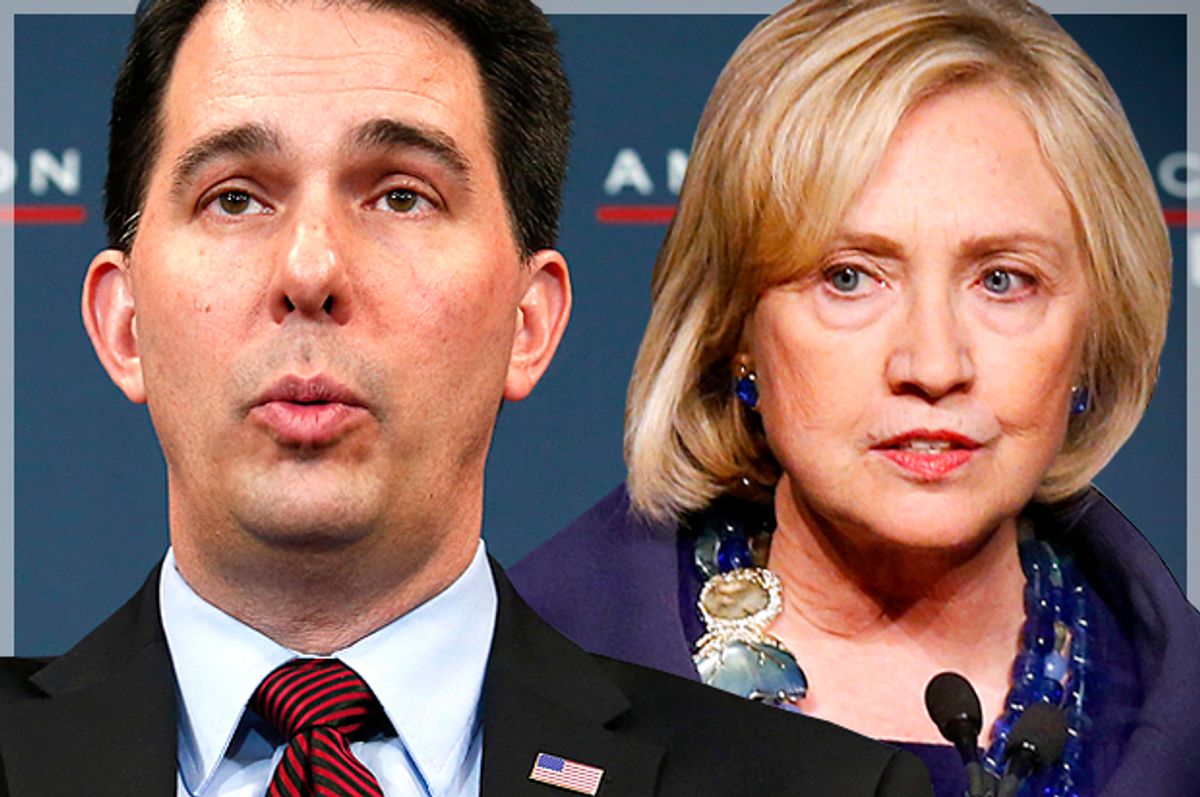 As a member of the generation that made a mantra of the words "never trust anyone over 30," I have never blamed younger people for dissing the Baby Boomers. I think it's important that each successive generation have a healthy skepticism of their elders and stake their own claim to the culture. Lord knows Boomers did; we pretty much took it over and told the older generation to go to hell. (Well, at least until we got old enough to co-opt the Greatest Generation's "brand" and make some serious bucks off of it.) Psychologists believe that an adolescent rejection of parental control is necessary to develop an adult personality, so young people proclaiming "Boomers suck!" is probably a natural rite of passage.

Still, I'm not sure generational theory is a very useful way to analyze our society in general. By "generational theory" I'm referring to the work of Neil Howe and William Straus who wrote the books "Generations: The History of America’s Future, 1584-2069" and "Millennials Rising: The Next Great Generation," which seem to have had an outsized influence on many pundits and cultural observers. The theory basically posits the idea that "generations" are predictably cyclical and produce certain archetypes out of particular events. But, while this is fascinating stuff to think about, I've never found it to be convincing as a way to understand the world.

This piece by Rebecca Onion in the latest of edition of Aeon makes the case that Howe and Strauss's thesis (which was turned into a lucrative consultancy called "Lifecourse") is pseudo-scientific mumbo jumbo. She traces the study of generational theory back a hundred years in some detail and finds that academics "have by and large concluded that generational thinking is bogus." It's a convenient way to look at history, but it's like reading the Classic Comic version of Shakespeare: You miss all the complexity of the characters and the poetry of the language.

However, from the standpoint of electoral politics, demographics are impossible to ignore; and age, if not generations, is certainly part of that.

The upcoming presidential campaign looks to be one which will be fought out on several different demographic battlefields. The first shots were fired this week when The Weekly Standard's William Kristol charged right at Hillary Clinton, basically saying she was too old to be president. Sure, he couched it in the usual "Baby Boomers suck" language (which is revealingly adolescent of the 62-year-old pundit) but basically he's making the case that Gen-X Rubio or Walker are the better choices for GOP voters:

The boomer presidents [Bill Clinton, George W. Bush and Barack Obama] were indulged as young men. They then indulged themselves with the fancy that they should be president. The voters indulged them, too, passing over the question of their qualifications—and, indeed, excusing several manifest disqualifications.

It may be that every generation gets the presidents it deserves. But enough already. Surely it’s time—to use a phrase associated with the Clintons—to move on.

In other words, just die already.

One is left to imagine what the "accomplishments" of the younger Republicans he envisions becoming president might be. If it's Walker, you'd have to say successfully evading an indictment and surviving a recall election are his main claims to fame. Marco Rubio has also managed to evade an indictment, and ran for Senate and won, so that's something too. The rest of the pack are all ... Baby Boomers. Every last one of them, from Huckabee to Fiorina to Santorum to Bush were born during the '50s or early '60s. Even Rand Paul (whom Kristol is definitely not endorsing) comes in right under the wire.

But again, this is really about the inevitable right-wing narrative that Hillary Clinton is an old hag. You knew they couldn't resist it. And that's when you run right up against a different demographic group, and it's a doozy: Baby Boomer women. Take for example, the angry reaction to Kristol's smug screed by Republican columnist Kathleen Parker in Tuesday's Washington Post:

Is it the Clinton in Hillary he doesn’t like? Kristol led the charge to defeat her efforts to reform health care as first lady. Or is it the woman in Clinton he finds so offensive? Perhaps he prefers women in flirty skirts and high heels to sturdy women in pantsuits? It was he, after all, who pushed Sarah Palin as the worthiest running mate for John McCain.

Probably all of the above and something more. Implicitly — and rather coquettishly, I might add — Kristol just defined the terms of his assault on Jeb Bush. Rather than say that Bush is merely another of those indulged boomers, he laid it all at Hillary Clinton’s feet, damning the past three presidents, insulting millions of his own cohorts, and revealing a measure of self-contempt in the process.

Perhaps Kristol was exorcising some of his own demons with this column — resolving long-simmering issues resulting from having been an indulged, Ivy League boomer who didn’t serve in the military and whose accomplishments are in the vein of commenting on the actions of others.

Half of the electorate are women and half of the older demographic Kristol insulted as a bunch of losers are women, and a good many of those are women who usually vote Republican, like Kathleen Parker. It would seem to be rather reckless of Republicans to denounce so many potential voters with such a sweeping condemnation.

But then Kristol might calculate that while he may alienate women, and older women in particular, screaming "Boomers suck" will be just the thing to bring over some of those Millennial voters who have rejected the GOP ticket in such huge numbers up until now. So maybe you can't blame him. After all, as Ryan Casey pointed out in this piece at Huffington Post, the media has been flogging the idea that young people are on the verge of abandoning the Democrats for years. He runs down a long list of polls and pundits declaring the inevitable defection to the Republicans (usually based on the fatuous notion that they will do this because the Democrats are not liberal enough) culminating with this point:

The centrist think tank Third Way won the prize, however, for 2014's most self-serving millennial propaganda. Armed with survey data measuring millennial attitudes on today's top policy questions (spoiler: millennials are progressive on every single one), author Michelle Diggles went to great lengths to shoehorn the findings into a preordained conclusion--that freelancing millennials are a perpetual wildcard in American politics, and amazingly, the centrist policies of Third Way are the answer to both parties' prayers! Ron Fournier of National Journal dutifully transcribed the pronouncement under the banner, "Millennial Madness: What Happens If Young Voters Bolt Both Parties?"

In describing millennial attitudes on marriage equality, abortion, family structure, marijuana legalization, immigration, and foreign policy, the study practically spells out the modern Democratic Party platform. Yet it concludes, bizarrely, that "as millennials eschew partisan labels, they are much more likely to switch the party they support from election to election."

Sure, that makes sense. And, needless to say, the Democratic defection did not happen. Millennials may be young, but they aren't stupid.

Surveys suggest partisan self-identification among American voters is declining; however, actual voting behavior indicates the opposite--swing voters have all but vanished, and straight ticket voting is increasingly the norm. Many voters simply prefer to see themselves as "independent" thinkers, while others are unhappy with their political party, sometimes even because they feel the party is not partisan enough. But so long as the Republican Party is beholden to the ultra-conservative white base it has cultivated since Richard Nixon employed his 'Southern Strategy' nearly 50 years ago, most millennials will likely find themselves voting straight ticket, too--for Democrats.

And, as he points out, that ancient Boomer warhorse Hillary Clinton seems to recognize that her political future is tied to these youngsters, and is formulating her political agenda with that in mind. From campaign finance to a pathway to citizenship for DREAMers and their families, to a hike in the minimum wage, her campaign so far has been very conscious of the top level concerns of young people. She may be old, but she isn't stupid either.

Gen-X dreamboats Marco Rubio and Scott Walker, on the other hand, are offering young people a bleak vision of endless war, antiquated social values and economic hardship and they know it. It matters little if that dark picture of the future is offered by a youthful fellow with an ethnic name. It's embarrassing for the Republicans that they don't understand that.