Once again, Indian-American kids dominated the bee — and we can't stop treating them like freakish threats 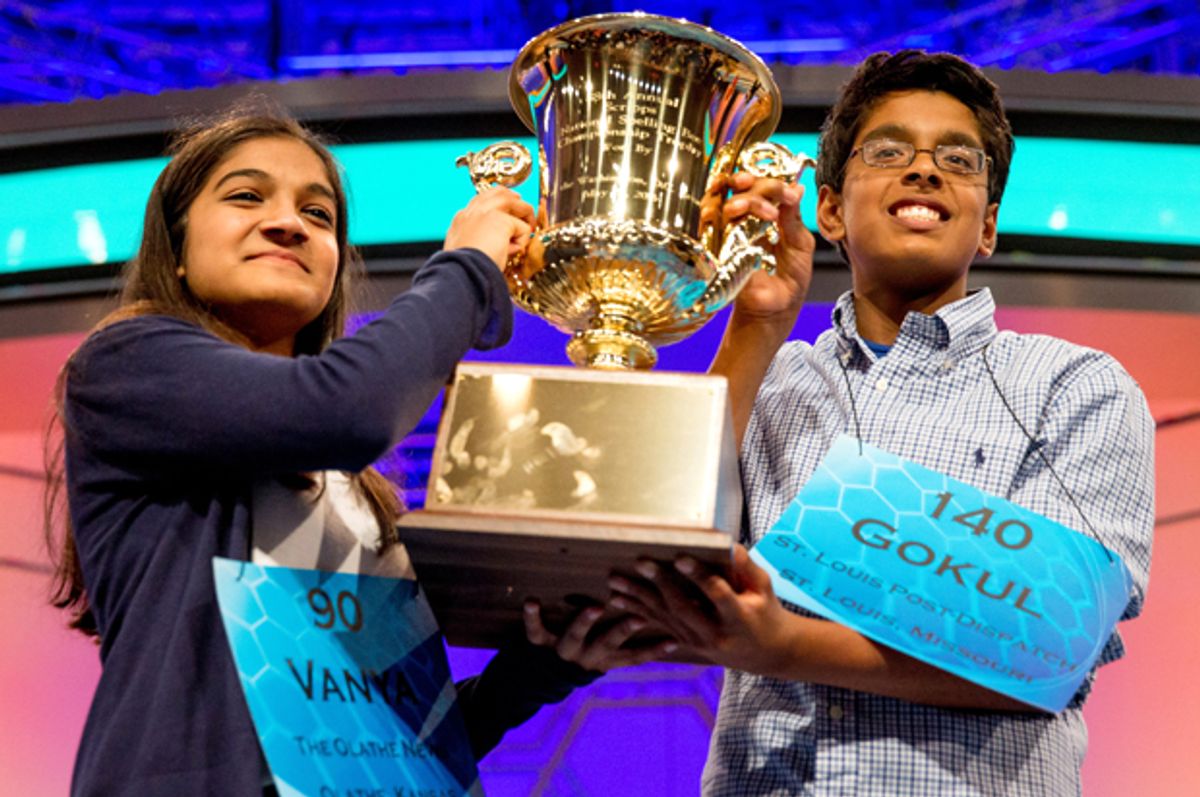 Vanya Shivashankar and Gokul Venkatachalam after winning the finals of the Scripps National Spelling Bee, May 28, 2015, in Oxon Hill, Md. (AP/Andrew Harnik)
--

It is the end of May, that time of year when we look lustily to the summer that stretches out ahead and we get our yearly sighting of that rare, young migratory bird, Indius spellus, holding up a hard-won trophy.  Once again, for the eighth year in a row, we have Indian-American winners of the Scripps National Spelling Bee. After 52 years of not a single tie, now for two years running, pairs of Indian-American kids have been the last spellers standing. This year it was Gokul Venkatachalam and Vanya Shivashankar.

The tie in sport and competition is both a letdown and a perfect conclusion. It is a letdown because games are designed with crowning a winner in mind. Think about those horrible regular-season baseball games that stretch into 15, 16 innings. Unless it’s late-season game, there is little consequence or drama as evening turns to night. And yet, some of us watch because we want the damn thing to end, for one team to go home the winner and the other the loser. Imagine the actual ruckus that would have ensued had Mayweather-Pacquiao been called a draw. Perhaps in the absence of clarity about winners and losers in life, we at least want to see it on the field of play.

But let us also praise the genuine pleasures of a tie.  A tie is a moment where the game gives up.  The players have beaten the game.  Paige Kimble, the executive director of the national bee, suggested something to this effect. “I think it’s time to consider that the bee may be entering a new era where the level of competition is so intense that we need to entertain this [a tie] as a possibility every year.”  I so desperately wish that Venkatachalam, who after he spelled the last word (“nunatakat”), had the presence of mind to drop the mic, for himself and his co-winner.

However, as in years past, the conversation around more Indian-American winners is going to be less about the poetics of the victory and more about the politics of one ethnic group’s continued domination. With apologies to the late Raymond Carver, whose phrase has now been run into the ground, what do we talk about when we talk about Indian American spellers?

the blasé shrug, which must nevertheless be offered and noted:

and even the meta joke:

Throughout the years that Indian Americans have won the national bee, there has been plenty of conversation in the media about why they are winning so much.  This is a perfectly legitimate question to ask. The answers have ranged from the cultural—Asian values of hard work and determination are guiding factors for continued success—to the more analytically rigorous—the growth of a South Asian spelling bee farm system, the importance of class in relation to time spent preparing, the influence of other family members on success.  Both winners this year had competed in the national bee several times before, giving them the important game-time experience they would need to become the champions this year. In addition, Shivashankar now joins her sister, Kavya, who won in 2009, in the winner’s circle.

While the why is a question that certainly needs to be explored, it is not the only question. What is more interesting is what the increased popularity of the bee might say about our current cultural moment.

Elsewhere, I have argued that the growth in recent public interest in the bee, in direct relation to Indian-Americans winning, is shaped by the fact that these young kids are seen as both geeks—the representatives of American meritocracy, no matter how awkward they may be—and racial freaks—a way of managing anxieties around immigration and the threat of Asian-American ascendance.  In light of the heavy Twitter vitriol that questioned the Americanness of the winners following last year’s contest, the bee is as much a racial spectacle as it is anything else.

Talking about race in relation to Indian Americans is perceived as a relatively safe space to have the conversation.  After the NBA star Stephen Curry was recently awarded the league MVP, there were no articles—at least in respectable outlets—written about how for eight years in a row, the MVP has been African American. While race saturates the NBA and other major sports leagues in this country, it is not always the direct subject of conversation in the way it has become with the bee.

The space is safe precisely because these Indian American kids—and their ever-present parents watching over them—are seen as model minorities.  They are model in their minoritiness because they achieve the American Dream through their own cultural values, rather than complaining about the racial structures that make upward mobility difficult.  Seeing them as model minorities reflects our on-going national desire for the absence of race as a social category governing our lives, and yet ironically, it is clearly present.

But just as much as the popularity of the bee tells us about our current moment, it is equally interesting in terms of what it doesn’t tell us.  Over the past several years, I have watched the bee with great anticipation and pleasure, as have so many of my South Asian friends.  But I am now wondering if the bee has hit a certain saturation point.

There are many reasons that the ABC show “Fresh Off the Boat” became a topic of so much conversation this year, particularly among Asian-American commentators. There was finally, after the failure of Margaret Cho’s earlier attempt, a depiction of Asian-American life on mainstream television. I wonder if the excitement was as much about the show itself as about the possibility that if one show was greenlit and did well, then more would arrive in the future. Shows that would be Asian-American-ish, suggesting, as another ABC show, "Black-ish," does, that there are multiple, often conflicting layers to Asian life in America.

If we think of the national bee over the past several years as the first mainstream reality television show about Indian-American life, it has created a robust if predictable narrative—the hardworking children, the present but demanding parents. But, of course, this is not the only story. We are presented with the one bird when there are actually many flying about throughout the year. One hopes that the bee spawns different stories of Indian-American—and South Asian-American—life that gains some traction, mainstream or otherwise. As interesting as it was to see young Venkatachalam in his blue-and-white button-down shirt on stage, it would have been that much more interesting to have seen him win in the LeBron James jersey that he wore below his proper shirt.

Sameer Pandya teaches literature and creative writing in the Department of Asian American Studies at the University of California, Santa Barbara. He is the author of "The Blind Writer: Stories and a Novella." You can find more of his work here.