Why this one photo speaks volumes about America's political evolution

A popular gay talk-show host invited a radical black rapper to perform on national TV. 2015 isn't so bad after all! 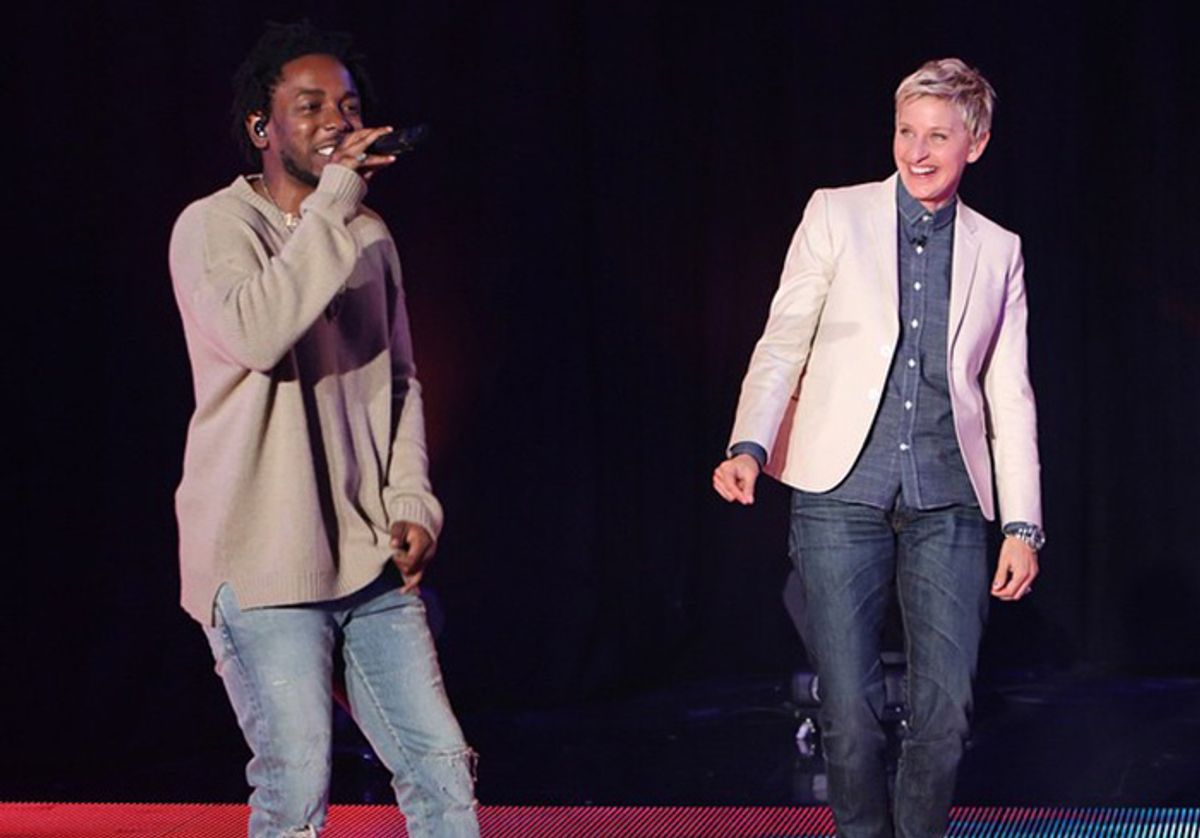 On Wednesday, Grammy-winning rapper Kendrick Lamar performed on "The Ellen DeGeneres Show." This fact alone tells you a lot of what you need to know about what’s happening in American politics.

I got into Kendrick in 2010 when I discovered his “Look Out for Detox” freestyle ahead of the release of his first album, "Section.80." His organic virtuosity and rejection of conventions was exciting and new; so were his radical politics. Never in a million years would I have expected to see him on America's most popular afternoon talk show, broadcast into middle America’s living rooms.

Before Ferguson, before Baltimore, and before our new national interest in state violence against black males, on "Look Out for Detox," Kendrick was already spitting fire on the subject:

Tell the government come shoot me, n***a
Cause I’m going out with a fist raised
And a fist full of money, give it to a fifth grade

The violence he's able to anticipate owes to a radical politics, a sort of Black Panther mentality. With a fist in the air, he’s seeking to right the wrongs of a government he sees neglecting poor school-aged children, especially those in black communities. If the government won’t fund the fifth grade, Kendrick will, and he'll do it by any means necessary.

It should be noted that his seemingly paranoid fantasy about the government shooting him for helping out kids is not entirely unfounded. When the Black Panther Party launched its successful Breakfast for Children Program in 1969, J. Edgar Hoover described the philanthropy as "potentially the greatest threat to efforts by authorities to neutralize the [Black Panther Party] and destroy what it stands for." The perpetrators of this so-called crime against white power were systematically assassinated, imprisoned, exiled and extra-constitutionally and invasively surveilled.

Kendrick returned to the dire scenario on his next big track, “HiiiPower,” the lead single off of his 2011 debut album "Section.80":

I want everybody to view my autopsy
So you can see exactly where the government had shot me.

“HiiiPower” was an ode to the Black Panthers and other black radicals of that era. The music video’s visuals matched footage of the incipient Arab Spring with Kendrick’s celebration of the Panthers and Malcolm X. But missing in the pantheon of Panthers and civil rights radicals is Martin Luther King, who is addressed as a hero of the older generations, not Kendrick’s:

Visions of Martin Luther staring at me
If I see it how he seen it that would make my parents happy
Sorry, mama, I can’t turn the other cheek
They wanna knock me off the edge like a fucking widow's peak.

(Old-schoolers might remember the first popular rap song, Grandmaster Flash and the Furious Five’s “The Message,” in which Melle Mel similarly warned of black anger: “Don’t push me, ‘cause I’m close to the edge…”)

Kendrick Lamar may be, as Ellen says, “the greatest rapper of his generation,” but he is also of his generation in another respect -- he reflects and represents his generation’s anger. His feelings toward the police on "HiiiPower" prefigure what we would see on the streets of Ferguson and Baltimore three years later: “I got my finger on the motherfuckin’ pistol/Aim it at a pig, Charlotte’s web is gonna miss you."

And now he’s been given the Ellen seal of approval.

Kendrick Lamar has somehow reached the white establishment. And Ellen doesn’t give a cheap boilerplate introduction for Kendrick, either; she seems to extol him extemporaneously. After the song, "These Walls," she lavishes more praise on the “brilliant” MC, whom she “adores.” She’s clearly a fan, and she’s excited to have scored Kendrick Lamar for a rare performance.

Ellen herself is, of course, no stranger to political controversy. She was famously chased out of television when she publicly came out in 1997. Her popular, titular sitcom was canceled, and she ignominiously disappeared, more or less. But in the subterranean depths of the American cultural mind there was a quick-moving and radical shift going on in terms of our attitudes towards sexuality. In 2015, Ellen is more than a decade into a highly successful daytime talk show run, utterly dominating any and all competitors.

Just some few years ago it would have been inconceivable that a proud and popular lesbian would bring a black radical into American living rooms by the millions. He speaks of “race war” in the song he performed, for Christ’s sake. Kendrick voices the complex frustrations and fears of the streets of Baltimore and Ferguson, a voice that is rarely permitted to speak with any real nuance and humanity on national television. But for once it was.

It often feels like progress is slow, and by many measures it is, but there is tectonic shifting under the national discursive surface. Voices like Ellen’s and Kendrick Lamar’s were excluded until relatively recently, and now they join forces in defiance of cultural and political norms. Kendrick’s performance followed Tuesday’s campaign announcement by Sen. Bernie Sanders, the self-described “socialist” challenging Hillary Clinton for the Democratic nomination. Just seven years ago, “socialist” was an epithet used with great success against candidate, and then president, Barack Obama. It was an effective weapon in the conservative armament, but in 2015, Sanders’ democratic socialism is accepted in a way no one would’ve imagined in 2008. Things are changing. For all the power of Fox News, congressional Republicans, and other preservers of the white, straight male conservative order, there is a counterforce, and it grows stronger by the day.