Martin Luther's pro-sex shocker: "Does the pope set up laws? Let him set them up for himself and keep hands off my liberty" 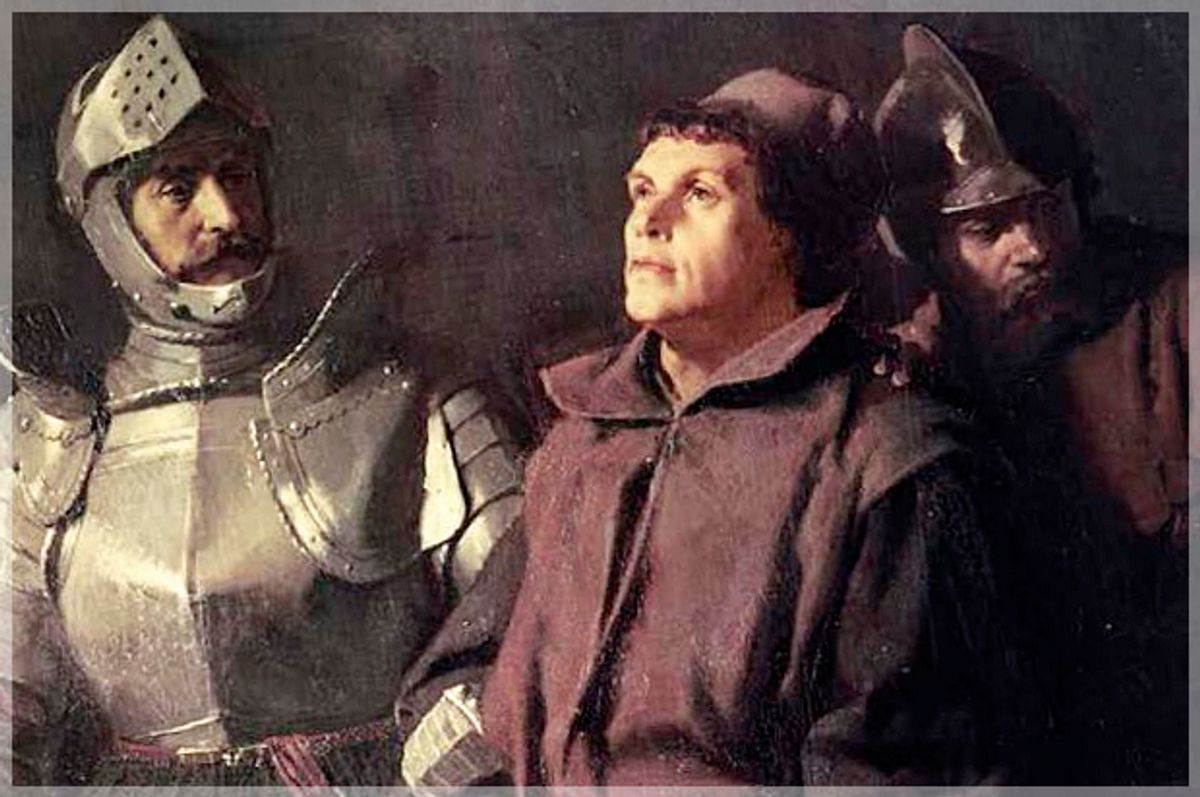 Excerpted from "Luther's Fortress: Martin Luther and His Reformation Under Siege"

In the early days of Martin Luther’s sojourn at the Wartburg, before he settled into his frantic pace of work, he seemed to lapse into a delirious, mystical state. The serenity of the landscape, the call of the nightingale, the joy of isolation, the freedom from fear, the distance from harassing inquisitors—all these presaged a time when he would be more productive in his theological and literary output than at any other period of his life.

It is not surprising that in his solitude the natural and unnatural, the healthy and unhealthy  physical life of a human being should have come into his thoughts. That process would lead him to ponder again the question of priestly celibacy and to deliberate on his own sexuality and on carnal drives in general.

On May 19, he touched on the subject of physical love in a letter to Nicolas Gerbel, a jurist, doctor of canon law, and humanist from Strasbourg who would become an important  supporter in subsequent battles and was deeply interested in Luther’s literary life. It is not clear just how the two had first established  their friendship or when Luther had met Gerbel and his wife. But from this letter it’s evident that in Gerbel’s marriage the Reformer perceived a romantic model. “Kiss and rekiss your wife,” Luther wrote. “Let her love and be loved. You are fortunate in having overcome, by an honorable marriage, that  celibacy in which one is a prey to devouring fires and to unclean ideas. That unhappy state of a single person, male or female, reveals to me each hour of the day so many horrors, that nothing sounds in my ear as bad as the name of monk or nun or priest. A married life is a paradise, even where all else is wanting.”

Inevitably, he found biblical validation for the sporting that goes on between husband and wife. “We are permitted to laugh and have fun with and embrace our wives, whether they are naked or clothed,” just as Isaac fondled his wife in Genesis 26:8. (Later he would refer to sex between spouses as precious and beneficial.) And female companionship was an excellent antidote to a man’s melancholy. “When you are assailed by gloom, despair or a trouble conscience, you should eat, drink, and talk with others. If you can find help for yourself by thinking of a girl, do so.”

Luther had treated the subject of marriage in his Babylonian captivity essay. While  he proclaimed marriage to be a divine institution—“What therefore God hath joined together, let not man put asunder” (Matthew  19:6)—he denied that  the institution was a sacrament. A sacrament, he insisted, was a mystery, a secret rite, a visible sign of spiritual grace that came from God not  humans. The human laws that extolled marriage had actually turned it into a “farce,” he wrote. These “shameful laws” made priests into merchants who were “selling vulvas and genitals” through greed and godlessness. “The laws of men seem to have sprung into existence as snares for taking money and nets for catching souls . . . openly selling the pudenda of both sexes.” If a couple in love know divine law and had natural wisdom, henoted, then “written laws will be entirely superfluous and harmful. Above all, love needs no laws whatever.”

Nowhere in the Bible was the celibacy of priests commanded nor their marriage forbidden, he insisted. Indeed, the contrary was true. He pointed out that James (the first martyred apostle) and all the apostles except John were married, and that the Bible portrays Paul as a widower. He invoked Paul’s letters to Timothy and to Titus: a bishop must be blameless and be husband to only one wife. The first prohibition of marriage was proclaimed in the year 385 by Pope Siricus, and it was done out of “sheer wantonness.”

Worse than wantonness, it was the work of the Devil, Luther argued, for it increased sin, shame, and scandal without end. Prohibiting prelates from marital bliss was the effusion of the Anti-Christ.  Again he invoked Paul’s First Letter to Timothy: “There shall come false prophets, seducing spirits, speaking lies in hypocrisy, forbidding marriage” (1 Timothy 4:1–4). Of the priest who takes a secret lover, Luther said, “his conscience is troubled, yet no one does anything to help him, though he might easily be helped.” Moreover, the controversy had led to the catastrophic schism between the Eastern and Western churches in the eleventh century. In the eastern Greek Orthodox Church the priest was required to marry a woman for the good of his community and himself. Luther seemed to like that  idea, and he proposed that every Christian community appoint a pious and learned person as a minister, leaving him free to marry or not.

For biblical certification he continued  to rely on Paul’s First Epistle to Timothy. According to 1 Timothy 3:2–3, the institution was specifically sanctioned: “A bishop then must be blameless, the husband of one wife, vigilant, sober, of good behaviour, given to hospitality, apt to teach; not given to wine, no striker, not greedy of filthy lucre; but patient, not a brawler, not covetous.”

Most of all, he denied that  this or any other pope had any standing whatever to legislate human sexuality. “Does the pope set up laws?” he had asked in his essay on the church’s Babylonian captivity. “Let him set them up for himself and keep hands off my liberty.” If a priest was supposed to be celibate, what standing did he have to set up rules about sex for the laity?

But Luther did not stop there. He ventured unhesitatingly into areas where even a layperson much less a priest feared to tread: into questions of adultery, impotence, fornication, and masturbation. What was a wife to do when she found herself married to an impotent husband? Luther’s answer: she should seek a divorce and marry one more suitable and satisfying. But what if the impotent husband should not agree? Luther’s answer: then with the sufferance of her husband—he was not really a husband anyway, but merely the man dwelling with her under the same roof—she should have intercourse with another,  perhaps the  husband’s brother, and the children from such a union should be regarded as rightful heirs.

And should a spouse wish to obtain a divorce, what about the Catholic law against remarriage? Luther answered that he or she should be permitted to remarry: “Yet it is still a greater wonder to me why they compel a man to remain unmarried after being separated from his wife by divorce, and why they will not permit him to remarry. For if Christ permits divorce on the ground of fornication (Matthew  5:32) and compels no one to remain unmarried . . . then  he certainly seems to permit a man to marry another woman in the place of the one who has been put away.” But what about the Catholic Church’s prohibition of divorce, all divorce? “The tyranny of the laws permits no divorce,” Luther wrote. “But the woman is free through the divine law and cannot be compelled to suppress her carnal desires. Therefore the man ought to concede her right and give up to somebody else the wife who is his only in outward appearance.” Still he detested divorce, he insisted, and preferred bigamy, considering it the lesser of evils and validated by multiple stories in the Old Testament. And annulment? Well, that process was far too complicated and time-consuming, not to mention the toll it took on all the parties.

But then came the Roman See, fumed Luther, and forbade priests to marry with no just foundation, and this had increased “division, sin, shame, and scandal to be increased without end.” It had led priests into irresistible temptation. The ban, therefore, was the work of the Devil, and to demand a vow of celibacy at the consecration of a priest was “the Devil’s own tyranny.”

The Vatican of Leo X and the Church  of England under a youthful Henry VIII took violent exception to Luther’s view of marriage, dubbing it a sensualized code of ethics, little removed from paganism. That  Henry VIII would take upon himself the role of defending the sanctity of marriage was rich in irony, of course, for it would not be many years hence before the king would seek out Luther’s support in his quest for annulment,  divorce, and bigamy. Given what was to come later, one can only titter with delight in reading Henry’s self-righteousness: “Whom God has joined let no man put asunder. Who does not tremble when he considers how to deal with his wife?” The king quoted St. Augustine: “The sacrament of marriage is common to all nations. But the sanctity of it is only in the City of our God, and in his holy mountain (the Church).”

“And so I say,” Luther wrote of a priest and a woman he loved, “let him take and keep her as his wedded wife, and live honestly with her as her husband, caring nothing  whether the pope will have it so or not, whether it be against canon law or human law. The salvation of your soul is of more importance than tyrannical, arbitrary, wicked laws which are not necessary for salvation and are not commanded by God.”

Already, as Luther languished at the Wartburg, a number of priests were taking this advice and marrying by the score.

James Reston, Jr. was an assistant to Secretary of the Interior Stewart Udall before serving in the U.S. Army from 1965 to 1968. He is the bestselling author of 17 books — including "The Conviction of Richard Nixon: The Untold Story of the Frost/Nixon Interviews," which helped inspire the film "Frost/Nixon" (2008) — three plays, and numerous articles in The New Yorker, Vanity Fair, and the New York Times Magazine. He won the Prix Italia and Dupont-Columbus Award for his NPR radio documentary, "Father Cares: The Last of Jonestown." He lives with his wife in Chevy Chase, Maryland.